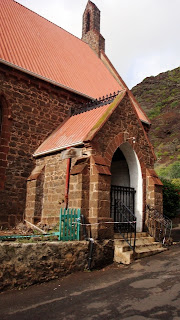 We reached St Helena island on Monday morning around 12h00 local time. Which is, of course, the same as GMT or UT.

This time our arrival went with less heartache than on the previous occasion, as it was during the working week and during normal office hours. The customs ladies were friendly and efficient and we all went ashore together in the ferry. We spent the afternoon doing all the rest of the paperwork, then had a hamburger and a beer or two. We were also able to contact our loved ones via the internet and share some yearnings. 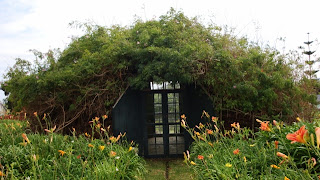 Tuesday was very interesting. Dawid and I went on a tour of the island, while Renier enjoyed his solitude and surfed the internet, contacting his friends and family. In the afternoon it was my turn for solitude and chatting to my beloved, while Renier and Dawid went scuba diving. Imagine, scuba diving in practically the most remote corner of the world. At present only reachable by sea.

The island itself is quite interesting, as it has a history as old as South Africa, perhaps older. The Portuguese discovered the island in the early 1500's (around 1531?) and apparently kept it a secret for over 90 years, when the Dutch came to know about its whereabouts, then the other European nations. It was annexed by the British in 17xx and has been under British control ever since. 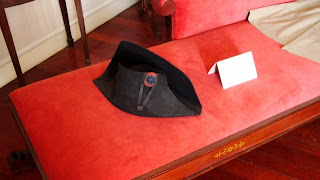 Perhaps it is known best by its most famous inhabitant, Napoleon Bonaparte, who spent his last years there in exile. The island has special significance for us South Africans, as some of our great grandfathers were interned there during the Anglo Boer War from 1898 to 1902. Dawid and I visited the little cemetery where those who died during their internment are buried. The cemetery is kept quite neat and is situated in a most beautiful glade on the mountainside near to a little Baptist chapel. 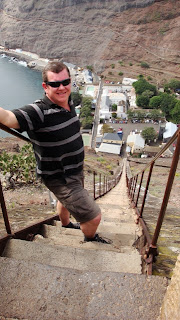 We also had a look at Napoleon's home, Longwood House, as well as the governor's official residence which goes by the name of Plantation House. At Plantation House the grounds are home to a number of huge tortoises, the oldest of which is 170 years old and answers to the name of Jonathan. Well, in a manner of speaking. 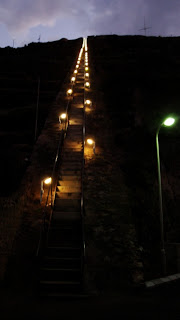 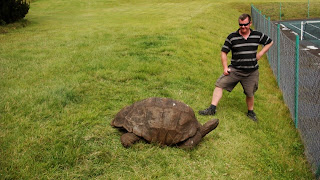 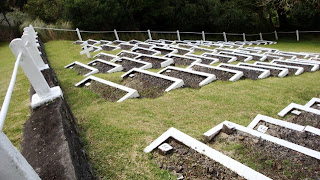 We then had a look at Jacob's Ladder from the top. Another famous landmark on St Helena, this is a set of steps, 699 of them, leading up the mountainside from the town to the fort on top. It started as a funicular railway to supply the fort and was then converted to a set of steps. They are quite steep at 11” average per step. That's about 27cm odd. Quite steep, even for going down. 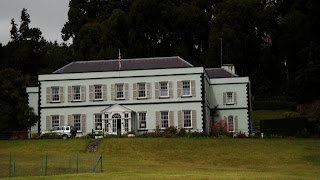 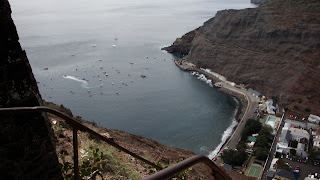 After the tour I was hungry as the day was quite cold, so I had a hamburger and chips before settling down to load my blog. It took more than two hours, as one sucks individual electrons through a drinking straw for internet access. Or so it feels. The internet connection is actually fast enough to Skype, but not all access is fast. I managed to chat to Carol for a while before the connection was promptly severed by the meter after my airtime ran out. The chat made only a little dent in my longings...

On Tuesday night we had a beer in a different place. Then, by mutual agreement, we went back to the boat and made dinner. The mutual agreement was that the food on board is better than the food ashore. Anywhere on the island. Period. So I cooked, as it was my turn anyway.

We had Pasta Carbonara alla Ziets. 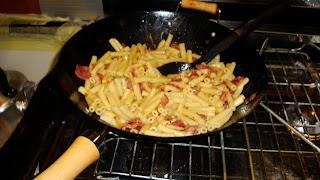 1 envelope pasta sauce. We used chicken and mushroom, as this was the nearest flavour.


Cook the pasta in fast boiling water. Add some salt and a dollop of oil to the water before adding the pasta. This will keep the pasta separated. When the pasta is done, pour off the water into a cup to make the sauce. No use in wasting perfectly good starch water. 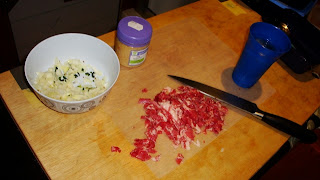 Fry the onion and sweet pepper in medium hot oil. When the onion goes glassy, add the hot chili and garlic. Stir fry this until the onion goes brown, then add the chopped bacon. Stir fry until the bacon is done to your taste, then add all the pasta and mix through. Pour the sauce over this and stir fry for another minute or two, then dish up.

A simple dish, quite delicious, using only two pots. And better than the food in town.

This morning we serviced the engines, topped up the diesel and water tanks, then went to town for our weather checks and last shopping. We actually found some tomato paste for 10p a tin, as the tins were just out of date. What a bit of luck! On the other hand, there were literally no fresh tomatoes to be found in any shop in town.

The last thing we did on the island was to take a shower in the ablution facilities on the foreshore. We were hoping for some hot water, but alas, there was none. So we took a cold shower using shampoo to wash our bodies as all our bathroom kits were on board. Dawid had taken shampoo along to rid him of the salt on his body after taking a swim before we went ashore. This came in very handy, as all of us had last taken a proper bath or shower some days earlier.

We all felt a sense of relief when the anchors were weighed, the sail unfurled and course set for the Brazilian coast. I guess the last shower ashore may have been symbolical, washing away the effects of the land on us. Perhaps a bit like the immortal words of John Masefield in his poem Sea Fever, quoted here:


I must go down to the seas again, to the lonely sea and the sky,


And all I ask is a tall ship and a star to steer her by,


And the wheel's kick and the wind's song and the white sail's shaking,


And a grey mist on the sea's face, and a grey dawn breaking.


I must go down to the seas again, for the call of the running tide


Is a wild call and a clear call that may not be denied;


And all I ask is a windy day with the white clouds flying,


And the flung spray and the blown spume, and the sea-gulls crying.


I must go down to the seas again, to the vagrant gypsy life,


To the gull's way and the whale's way, where the wind's like a whetted knife;


And all I ask is a merry yarn from a laughing fellow-rover,


And quiet sleep and a sweet dream when the long trick's over.