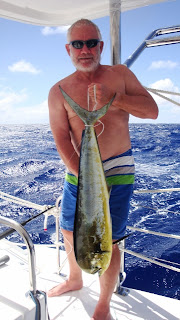 Today dawned with the lowest barometric pressure since we left Cape Town. 1015HPa. And sure as little green apples we got nice wind around lunch time. At present it is about 19h30 local time and the wind is blowing at 20 knots. The boat is sailing nicely along at around 7 knots and jumping around a bit from the swell on the port quarter. Somewhat different from the sedate pace at which we sailed up to now.

We now have to hold on to move around and your core muscles are working full time to keep you upright. I have difficulty in hitting the correct keys typing this blog. Every time the boat lurches, I hit the wrong keys and have to correct the spelling. The spelling mistakes come out hilarious. I suppose I don't look too elegant either, sitting here with both my hands on the table, propping my hands on the index fingers or thumbs, as required by the typing style. It is a slow and laborious process to do this under the prevailing conditions.

I had the chance of taking an early sight of the sun while it was away from the clouds. These two sights, combined with the dead reckoning over two days, reduced to a fix which was 8 nautical miles away from the boat's GPS. More support for decent backup navigation, I would venture. And definitely a warm feeling in my psyche.

I caught my fifth fish today, a medium size Dorado. This one we kept. And this time I did the dressing of the fish. Therefore there was ample sashimi for lunch. Renier does not eat sushi, let alone sashimi and Dawid is not really patial to sashimi, although he eats it on an experimental basis. Which left more for me. These were the morsels that was left on the skeleton after the filllets were removed. They were sprinkled with lemon juice and some soy sauce, then left to cure a little for about ten minutes. After which they disappeared in short order.

We got four meals out of this fish into the freezer in addition to my sashimi lunch. I kept one portion out for dinner tonight, as it was my turn at galley duty. This became hot Sechuan fish served with stirfry vegetable noodles. 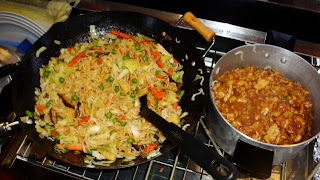 Some hot water to rehydrate the mushrooms


Mix the egg and the cornflour to a thick batter. Cut the fish into thumb size cubes and cover the fish in this batter. Mix the vinegar, soy sauce and sugar to form a glazing sauce. Fry the battered fish in a light5ly oiled wok until the batter goes brown. Remove from the wok. Then add the chopped chili to the wok, fry for 3 minutes, then add the fish back to the wok. Stirfy this until the flavoured oil has covered all the fish, then add all the glazing sauce. Bring this to the boil, then boil until the sauce has the right thickness. This is up to personal choice. Remove the fish and sauce from the wok and keep warm. The fish is now done. If this took more than ten minutes you have done something wrong.


Lightly oil the wok, then fry the pepper and garlic until the garlic is nicely done. Take care not to burn the garlic or the pepper. Add all of the vegetables and stirfry until they are just al dente. Add the cooked noodles and mix thoroughly. Add a dash of soy sauce and dish up. This takes another ten minutes maximum.

A fast and easy to make dish that uses basically one pot/pan and goes a long way to stretch your protein supplies on board. This lot provided six generous helpings. Pity we weren't ashore. Then we could have had a nice crisp dry white wine with it.