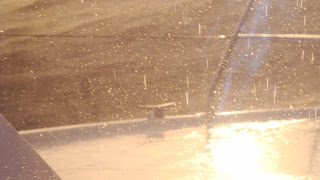 Today was full of unpredictable events and serious sailing. We are now close to the Brazilian coast, less han a hundred nautical miles away. The wind always blows favourably in this region and this time it is no different. We have winds of just under twenty five knots blowing steadily over our port quarter, pushing us along at over six knots. In addition to this, we picked up an ocean current, probably the beginnings of the Guyana current, adding another one and a half knots to our speed over ground. All of this making the last twenty-four hours the fastest of the voyage thus far. We covered 149 nautical miles in this time. 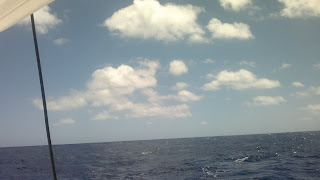 We are careening off the swells of four odd meters at 11 knots, making for quite exciting times aboard. Especially for Dawid, who had the dubious honour of being the first to lose cutlery and galley equipment overboard.

He was washing the dishes and while dumping the dirty water, dumped a teaspoon as well. But that was only the beginning of his woes. He then put some eggs on the boil for making a light breakfast. On one of the wilder surfing excursions, the boat bucked and dumped the pot plus its contents on the cabin sole.

Dawid then had to clean up raw eggs and water from the cabin sole and in general salvage whatever pieces of the breakfrast he was preparing. The last straw came when he was dumping the dirty water from our scullery bucket. The boat lurched again and the bucket went skidding across the aft deck and overboard on the way to its final resting place.

All of this was, of course, accompanied by the vociferous invective requisite of such occasions, which drew the attention of the skipper. Dawid was making heavy water of this, not lost on the skipper, who had a field day. His parting shot on leaving for his afternoon nap was requesting Dawid to try his utmost best to keep all the boat's equipment aboard during the rest of his watch. 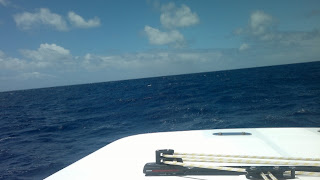 So this time it is Dawid's penance done, I had my chance already.

We spent the rest of the morning quietly sitting out some squalls in the saloon. During this time we kept ourselves busy by polishing the scale off the stove's burners, a fearsome task with the tools and materials at hand. The scale is basically rust on the stainless steel burner heads. We need to hand the boat over as new, so the scale has to go. Pity we don't have spare burner heads, it would save many hours of senseless work.