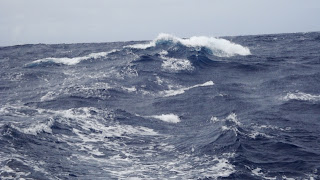 This day surely will go down in the history of this voyage as the most unnerving yet. Our autohelm lost its mind, literally, yesterday and it was still lost by late afternoon. It seemed that the maufacturer forgot to load the software. By sunset yesterday we had been steering the boat by hand for close on four hours.
The skipper made a call to cease the repair efforts and re-organised the watches to a two hours on, four hours off duty regime. The two hours on duty to be spent steering the boat by hand in heavy seas and in pitch darkness. We had a relay dinner, spelling the member on the helm that he may also have a warm dinner. The skipper opted to sleep in the saloon for the night, as we still had squalls around us. 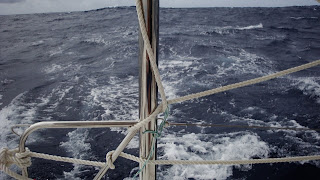 The plan was not an easy one to get your head around, but one has to. There is neither a breakdown service nor roadside assistance close by. In fact, the closest assistance is in the region of five hundred nautical miles away, three days by fast boat. Or perhaps Malcolm, our friend, in another yacht three hundred miles behind us.
So you grin and bear it. But not necessarily with a calm and serene mind though. There is a multitude of emotions that appear, buzzing like a swarm of bees though your mind, then go away. Just to be replaced by the next batch of grievous ghosts that lurk in the dark shadows of your mind. After a short discussion of our fears, it was unanimous that these are not to be made public, as these ghosts have a propensity to multiply and grow very fast.
To me, this was a sign of maturity amongst the crew. Or perhaps it was the ego thing, or cowboys don't cry.
Or something else. Try this.
From another point of view it is a bit like Douglas Adams' Hitchhiker's Guide to the Galaxy, which has the heading on the front page DON'T PANIC. It is, after all, a lot easier to make light of this and use it as part of learning. Shifting the boundaries of your comfort zone for starters.
This can be accomplished in several ways, the easiest being to change your position on the continuum of reality. Or changing your weltanschauung. All fancy terms.
In simple terms this translates to changing your point of view. On a more serious note, there is a lot going for What the Bleep do We Know Anyway, which proposes that your experience of reality is detemined completely by your position on the continuum of reality. Imagine being on an undulating surface, rather like a smooth meadow, where one can instantly change position. Very well, bowing to the quantum physicists, as instantly as your decisions can be changed. But still very fast.
Your thoughts do not need to creep from one place to another, it can jump. Which makes a huge difference to this whole issue. One can, in fact, have a number of experiences by changing your viewpoint through playing a game of what if, then living the different experiences. I tried, and it works. Call it a bit weird, even kinky, but it still works. Of course you need to steer clear of the negative parts of the what if game to keep the ghosts at bay. But you feel the elation, the disillusionment, the joys, the excitement of the challenge, the whole gamut of emotions.
And you get on a high if you have the right frame of mind/ position on the continuum of reality. Chalk up one for applied quantum physics in psychology. These mind games can get quite interesting.
It took me a good hour on the first stint at the wheel after dark to come to terms with the physical experience of this new environment, about which you can do very little. You get rained upon and the wind chills you. The wind taking the boat like a leaf and slewing it around, making it very difficult to steer a proper course. With only the boat's magnetic compass as reference, it was exceedingly difficult to steer to within about thirty degrees of the required course. One has but the very greatest admiration for those who do long distance ocean racing under such conditions.
At least I earned some bragging rights, having surfed this 11 ton boat down the face of a four meter swell at 14.5 knots, measured on the skipper's GPS late yesterday afternoon. And I saw a meteorite lighting up the sky for about a third of the way across the skies late last night during a spell of open skies.
Some visual celebration of the excitement I felt in me, no less. 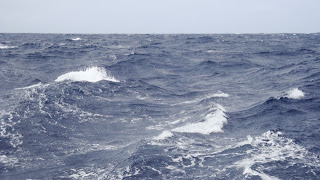 We each took our turns at steering the boat through the night, with my last watch before sunrise being the 04h00 to 06h00 slot.
By this time I had the steering mostly under control, with only the odd excursion to thirty degrees off course. That was when a gust of wind would slew the boat around and a swell would do the rest. The little breadcrumb trail behind the figure of the boat on the GPS was reasonably straight, although one could see a deterioration towards the end of the watch as fatigue set in. Chalk up one for a steep learning curve.
The skipper was on watch next. Having slept a while, not too much but something nevertheless, the rest gave him a clear mind and we tried another angle of attack on the recalcitrant autohelm. This time it worked and it kept the settings. Soon we had the compass headings aligned with those of the GPS and we could continue under the autohelm again.
Curses on the electronics and software and a deep sigh of relief. This piece of equipment has been working properly for a full fourteen hours as I sit here typing up the blog.
Thank heavens for small mercies.