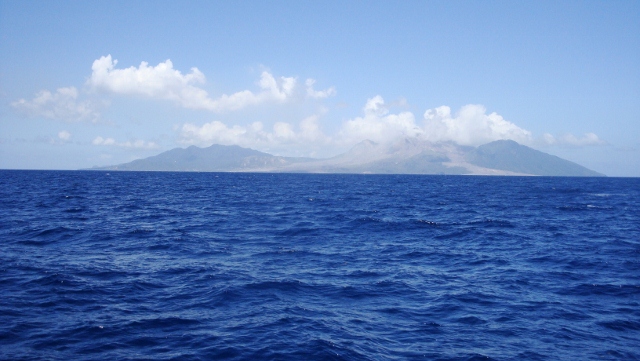 Today we officially entered the Caribbean Sea. There is sea grass floating all over. In large stripy clumps. Looking for all the world like a whale with diarrhea had passed there. The wind is mild now, with us passing in the lee of the island. This is the bane of your life sailing the Caribbean. The islands block the wind to such an extent that you would think the wind is fickle, when it is just the effect of the islands.

We passed close to the island of Barbados, perhaps fifteen miles away. But we could not really see land due to heavy rain clouds and squalls. The clouds eventually cleared enough that we could see the silhouetted outline of the island against the clouds.

Our voyage has now taken a turn. We are now back in civilisation and we can listen to the local FM radio stations. Not that you will really want to. They play reggae and calypso style music all day long. One gets an overload on short notice.

My sextant navigation is now basically over. Today was overcast, so no sun sights were possible. And the weather was hazy enough to prevent bearings of land marks to be taken. Although we could perhaps have taken a bearing or two off the ends of the island. A bit optimistic under the prevailing conditions, but possible. We shall save these for another day.

We have heard from home that there was a hurricane in the USA, specifically Florida. This makes life interesting, as this is exactly where we are going. We shall take a good look at the weather before leaving St Maarten, so as to get a slot between hurricanes. Literally. I would not have ever dreamt that I would one day be dodging hurricanes.

I hope there will be a marina left by the time we get there! 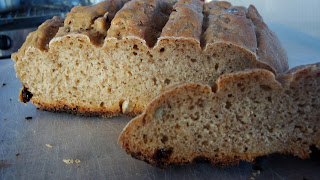 
I made another sourdough loaf today, adding seeds and raisins. The sourdough starter was mixed during my 00h00 to 03h00 watch and left to proof until daylight. While this is not overnight, bear in mind that the ambient temperature is still over 28ºC/82ºF, so you get a fast reaction from your favourite sourdough.

The sourdough proof was used this morning to make the final dough mix, which was left in the cold oven aboard to rise. This afternoon around 15h00 the dough had more than doubled in volume, so I kneaded it down, shaped it into two small loaves and left it to rise for another two hours. Some shallow cuts were made on top of the loaves to help with even oven spring and the top surfaces wetted with water before the oven was turned on. These loaves also started baking in a cold oven, like all my other loaves. They were baked for forty minutes before the heat was turned off, then left in the oven for another twenty minutes before removal for final cooling. Today, incidentally, I took the loaves out to cool, then promptly put them back in the now lukewarm oven, as preparations for dinner was about to start and the space was sorely needed. No harm done, the loaves just cooled in the oven.


For the starter sponge

¼ cup mixed seeds. Mine was pumpkin, sunflower and flax seed.


Mix all the dry ingredients. Add the sourdough starter sponge. Mix thoroughly. Add about half of the water. I added too much water, with the result that the dough swallowed another cup worth of flour off the kneading board. Hence the extra cup of white bread flour in the list of ingredients.

Turn the dough out on the well floured kneading board when it becomes too stiff to mix with a wooden spoon. Knead for about fifteen minutes until the dough becomes satiny. Wet your hands and pat the dough into a flat ball, then cover the wetted dough ball and leave to rise for 8-12 hours. In my case, the weather played along with the aggressive sourdough and the rise time for these loaves was less than that.

Roll the dough out onto the floured kneading board and knead it back to the original volume. Shape into the final shape and leave to rest for another 2 hours. Cut the surface of the loaves and then bake as per your favourite oven regime.