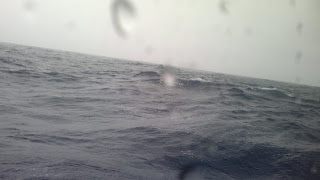 This day dawned magnificently, in clear skies with the moon and Venus in a classical Islamic pose. A reddish brown haze on the horizon coloured the skies in a palette of varied pastels. But I guess that there is some truth after all in the old seaman's weather adage:


I managed to take some star sights with the sextant for my navigation exercises. This gets interesting, given my “extended” knowledge of astronomy. (It is extended because I know that the star forming the head of Orion is called Rigel.) 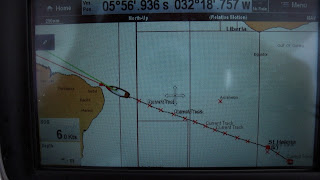 The celestial navigation manual proposes that one prepares for your star sights by doing some preliminary calculations first, then choosing the stars for taking their elevation angles. Not me. I take out the sextant, then check for some nicely positioned stars and measure their angles. This then leaves me in the lurch as to which stars I actually measured. It boils down to placing a very large portion of confidence in the repeatability of your sights. Meaning that you think that your operator error in the readings is very small. This is always an ego thing.

By the time that you get to the sight reduction tables you realise that some stars are spaced quite close together in both azimuth and elevation angles. You then need to process for all of the closest stars to your sights and choose the ones that you consider the closest to your sights. A shaky method at best.

The route of preparatory calculations is the easier one. The sights are easy and so are the reductions. There is an added complication in the prep in that one needs to calculate the magnetic bearing of each star to enable you to at least look in the right direction, thereby eliminating some uncertainty of where the star is located. Perhaps I can extend my astronomical knowledge a bit further following this approach. Next time...

The day followed the way of the sailor's adage and towards the middle of the morning the squalls rolled in and we had rain on and off for almost the whole day, At a first guess we sailed for roughly four hours before we furled away the genoa in desperation. The squalls steal the wind or give an overdose, depending on which side of the boat they pass. This has the result that you are incessantly gybing the sail, furling or unfurling it, or reefing it against the change in wind speed. After doing this three or four times in an hour you furl away the sail and start the engine. Fiddlesticks!

This makes for a dreary day. Today was shower day and we could all take a shower in fresh water. No sooner had I done so when the squalls started. I was a bit miffed, as I am actually looking forward to taking a shower au naturelle as it were. But the squalls we had so far were not heavy enough in the rain part to be useful as a shower. Wind driven drizzles were all that they were. Dreary is probably a good description.

We sat around in the saloon and did our chores outside in between the squalls. It was my turn at washing up and cleaning the galley after dinner tonight. This I accomplished in a race against yet another approaching squall, finishing the dishwashing while taking on the first spray of ice cold drizzle.

It's interesting that the ambient temperature is around 26ºC/78ºF, but the rain is quite cold. You could put it in your whiskey, it's that cold. You can actually feel the drop in temperature in an approaching squall. It happens suddenly, like opening the freezer door.

We saw a ship today, our first ship in more than two weeks since leaving St Helena. The VHF radio also happened to burst into life again, with some legible traffic, as opposed to the odd bit of static crackling of too distant signals breaking through the squelch.

This means that we need to keep an extra careful lookout now, especially during squalls when the visibility is quite bad.

It is also a sign of having crossed the bulk of the Atlantic ocean. We are back in the shipping lanes close to land where there is a lot of traffic. It also says that the end of this leg of the voyage is not far off, Another two weeks. We shall have to stop at St Maarten where there is a Moorings base. The autohelm needs replacement or at least some professional attention. There is also a number of other things that may need attention. By that time we shall have been at sea for a full month.

Already one can see some symptoms of being long at sea. Dawid forgot which watch slot he was supposed to be on duty and arose from his slumbers three hours too early. This after we discussed these symptoms just this afternoon. It's a giggle, but something to be aware of and too look out for, especially in your own behaviour. Some people call it cabin fever.

For now the situation on board certainly has not gone into that abyss. Perhaps due to our outlook on life, as discussed in an earlier blog.