Flavours of Africa: Oxtail And Samp 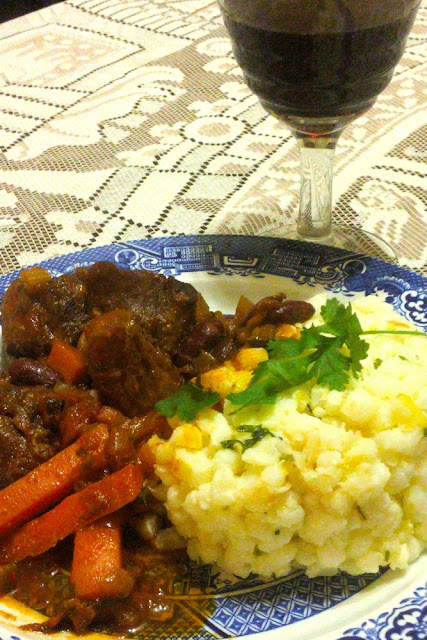 Winter arrived properly here in the Cape yesterday, along with the associated rain and cold. Today we have had some thunder and lightning already, with heavy clouds over the Helderberg.

Time for a real winter stew.

For a while now I have been thinking of traditional African stews. A search on the internet revealed very few local recipes. Those that are listed vary from having very simple ingredients to some exotic spicy versions.  Mostly the dishes are from outside of Africa.

So I decided to have yet another version. A stew with an East African slant, if you will. This means that there needs to be a hint of the Middle East in there, with some exotic flavours, but not too spicy. Having reasoned thus far, the ingredients started to settle in my mind.


Lots of cumin, smoked paprika, mixed Madagascan pepper, some garlic, a hint of cinnamon, then some sage and coriander leaves at the end. Coarse sea salt. A dollop of soy sauce. Done. To give  this dish an African flavour, I added red kidney beans as well. My reasoning was that the dish will be served with samp, the broken cooked maize kernels that are so traditional in Africa. Mixed samp and beans is quite popular too, but I decided against this as there was beans in the main dish anyway.

Samp is soaked in salt water for two to three hours prior to cooking. The kernels will soak up some water and wash off some starch. This is discarded and fresh water added for the cooking, which also takes one and a half to two hours. At the end the kernels are nicely swollen and quite chewy. To this I added a dollop of fresh cream and a knob of real butter. This makes for a rich creamy flavour to soak up all the juices from the oxtail. 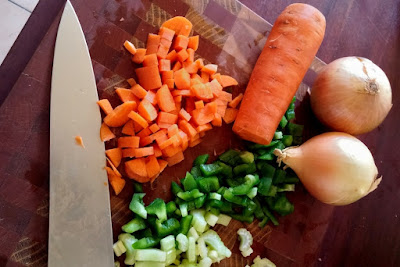 Oxtail tend to be very tough and has lots of fat. You may not want all the fat in your dish, but do not despair. There is no need to cut the fat off, the process will take care of this. The beauty of oxtail is that one cooks the meat to a very gelatinous consistency, giving the dish an almost creamy texture. In this case I patted the meat quite dry, then fried the pieces in butter and cooking oil until it turned a nice toast colour of brown. The meat is done in batches to not have juices soaking up the heat and causing a cooking, rather than frying process.

The meat is then set aside to rest while you prepare the sauce. Discard the contents of the skillet, that is where most of the unwanted fat will be. This leaves the meat less fatty and nicely caramelised on the outside. 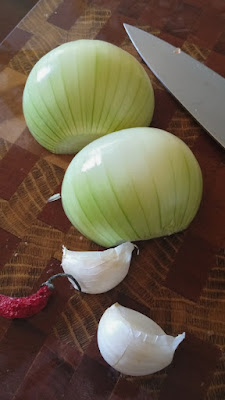 There is another angle to this dish: I made it the day before. This allowed the flavours to develop overnight. When cooking with spices, the flavours tend to be on the sharp side as a result of the frying which lets the oils out of the spices. Allowing the dish to rest will get rid of the very sharp essential oils and leave the basic flavours to marry. The meat also gains some texture, as it relaxes and is therefore a bit more tender.

On the cooking process there is much argument and debate. Some people use a pressure cooker, others like me don't. Some people will have the dish on relatively high heat, while others will use only the barest minimum. I follow the slow route. I believe that cooking any meat fast will cause some chemical changes and the meat will turn out like rubber if you are not careful. Also, I am told, the meat needs to be at room temperature before you start cooking or frying, otherwise it may go tough anyway. Oxtail specifically is quite tough and I have had some very rubbery meat served to me on the odd occasion.

Prepare your food with care and your efforts will be rewarded by the flavours. 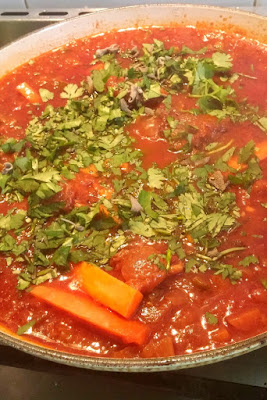 
Heat up a knob of butter and a dollop of oil in a skillet. Fry the pieces of oxtail until they are nice and brown outside. Fry them in batches if needs be. They must be brown, not grey.  Set them aside to rest. Discard the juices from the skillet.

The sauce is started by heating up some butter and oil in your saucepan. Fry the onions, green pepper, celery and carrot until the onion is translucent. Add the garlic, chilli and the coriander seeds and fry for another twenty seconds. Now add all the tomato and the rest of the dry spices. Add the dollop of soy sauce and the beef stock. Bring this lot to the boil, then add the meat back in. Ensure that the meat is covered in the sauce. Add some water if necessary. 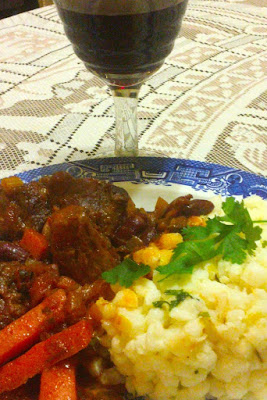 On day two,  bring the dish to the boil and add the carrot sticks,some chopped coriander leaves and the chopped sage leaves. Allow to simmer for another one and a half to two hours, then add the beans. Wash the beans of its juice before adding it to the dish, this will probably cause the dish to burn. You don't want that at this stage of the proceedings.  The sauce may be allowed to reduce some at this stage, making for a thicker sauce. Check for the saltiness after the beans have been added. The meat should be falling off the bones by this time.

Bring to the boil, then turn the flame off and allow the dish to rest again for fifteen minutes.


Soak the samp for two hours in salty water. Drain the starchy water and replace with fresh water. Add some salt, then bring to the boil and boil slowly for two hours or until the maize kernels are nicely puffed and chewy. Drain the excess water and add a good helping of butter and two to three dessert-spoons of cream. Mix this thoroughly. The result should be a very rich smelling and creamy tasting chewy maize dish.

Now dish up. This dish goes well with a full bodied red wine and good company.

Posted by The Hungry Sailor at 12:56 No comments: