2nd Leg Day 17: A Day of Rest and Retrospection 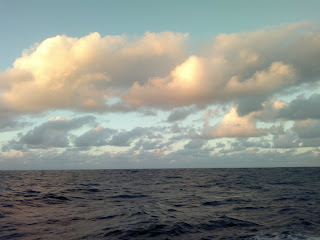 Today we passed the city of Fortaleza on the Brazilian coast just south of the Amazon river delta. We are sailing along, roughly following the 1000m contour. This strategy keeps us in the Guyana current and away from the fishing fleet which is more inshore where the water is shallower.

The weather has turned in our favour for a while. The wind is blowing at around 20 knots along the current. This makes for a flat sea and magnificent sailing conditions. We are flying along at over eight knots over ground, the full sail out. Our estimated distance for the day to tomorrow noon is over two hundered mioles. Not too shabby for a cruising catamaran of eleven tons. 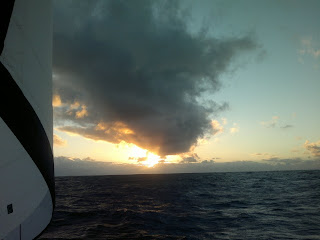 I was able to take decent sun sights for a change. My dead reckoning and the sun sights almost coincided, with the resultant fix differing about 11 miles from the GPS fix. I have now navigated seamlessly on my own cognisance, without referring back to the GPS since leaving St Helena island. A distance of about 2000 nautical miles. And the biggest difference between my manual method fixes and the GPS is 18 miles, obtained over a two day period with a change of course somewhere in between. The differences vary, they don not accumulate over time or distance. More like a statistical variation, mostly affectd by the assumptions associated with the dead reckoning calculations. There the errors accumulate the further you travel. Chalk up another one for manual methods.

The flat sea makes for balmy conditions and we were able to sit on the trampoline and enjoy the Friday afternoon for a change. A welcome intermission after the muddled weather we had.

And it is strange how one starts to reminisce of past experiences and dreams of things to come at times like these. A little respite and one's mind starts to wander. The talk centred on Dawid's first crossing of the Atlantic. We are now sailing in an almost coastal area, as opposed to the open ocean, so we take this as having crossed the ocean. From here onwards we shall stick close to land, basically sailing on the edge of the Atlantic, so to speak. 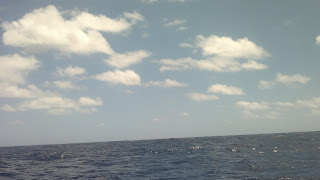 There were congratulations all around and a celebratory cup of coffee on the foredeck. We sat there in a relaxed mood, sharing the ghost stories from the conditions past. Quite a laugh sometimes. And some not so laughable. And the memories of good things at home and the folks at home, And so on. But mostly our dreams of the future. What we plan to do after this trip. Where to go, new places to discover, new experiences to be had. These dreams are part of the adventurer in us.

I am exceedingly grateful that I, for one, still have some of that sense of adventure, the pioneering spirit left. By my observations many of the people around me appear to have lost that sense. Given up hope and are contented in the relegation to a boring routine in mediocrity.

Heaven forbid that I lose it as well. I hold that the excitement in one's life is what keeps you alive, physically as well as mentally. And I am planning to live a long time still, Funny, the older I get, the less afraid I am of the unknown. It is like I look forward to this new world, whether it be physical or mental.

Perhaps a bit like Susan Jeffers puts as the title of her book Feel the Fear and Do It Anyway. Push your comfort zone. It is part of the continuum of reality that surely you can see in your mind's eye, but are afraid to enter. I guess the psychological part of the fear of the unknown is a lot worse than the actual physical part. And it keeps people locked up in mediocrity.

This self imposed limitation of course also keeps you from meeting interesting people. Susan Jeffers proposes that your circle of friends will pull you back to their circle, thereby preventing you from changing. Or, phrased differently, growing. Something to be aware of in your quest for new discoveries. It is a lonely path. You change friends often. Or perhaps it is better to say that you gain new friends frequently in your voyage of discovery.

A celebratory dram to that!
Posted by The Hungry Sailor at 22:54