2nd Leg Day 26: The Day Of The Huge Storm Clouds 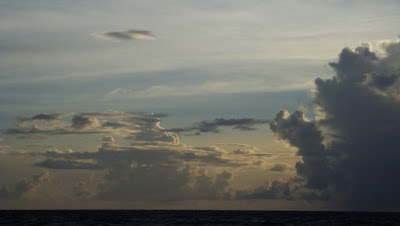 I was on the 03h00 to 06h00 watch this morning. The day dawned on thick, ominous storm clouds. The wind freshened and backed to our starboard bow. I started to batten down hatches, stowing loose items lying around in the saloon and did a general tidying of the boat. All this in anticaption of the approaching storm.

The wind freshened some more and a few scattered drops of driving rain struck me in the face. I was sitting ready at the helm to furl away the sail. Very diligent indeed. 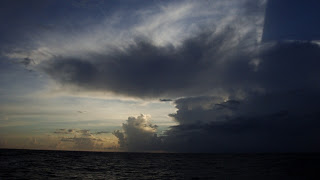 Then the storm petered to a squall, which in turn petered out to nothing. The wind veered to where it was and died down. I had to go around and open hatches again, lest we dry out to the likes of an old orange peel. At least the saloon is now tidy.

This routine has been the norm for the past few days. Today we have a one and a half meter swell on the starboard quarter, heaving us around a bit for a change. We also have a current ahead of us, slowing us down to a snail's pace. Very frustrating.

My navigation is back to normal after some less than accurate fixes after we made some zig-zag course changes in the heavy current of a few days ago. Such course changes play havoc with your judgment of average overnight direction and speed. The tyro navigator would probably do the dead reckoning by each leg of the course, then add it all graphically on the plotting sheet. This certainly is more work. Whether there is value added doing this on an open ocean passage is debatable. My worst fix is still less than twenty nautical miles from where the GPS says we are. The biggest contribution to the offset being the distance and direction of the dead reckoning calculations. This morning the fix is where it should be, less than 10 miles difference. The offset tends to settle back to its controlled state as one stays on a set course and speed. Chalk up one more lesson for judgment calls in dead reckoning.