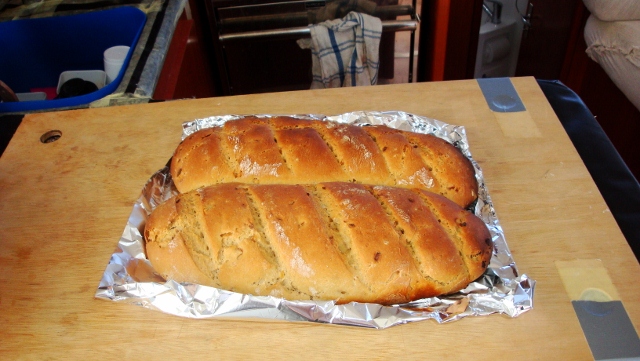 Dawn saw an overcast sky, gray and rainy. Renier got his the first dowsing from a squall on the voyage during his 00h00 to 03h00 watch slot, I mine on the 06h00 to 09h00 slot. Dawid was spared a dowsing for this round. The weather was cool enough to warrant a T-shirt and a rain jacket. Later in the morning the clouds cleared somewhat and blue sky was to be seen all over. But the squalls stole our wind and we had to motor along. Needless to say, in these conditions we did not catch any fish. 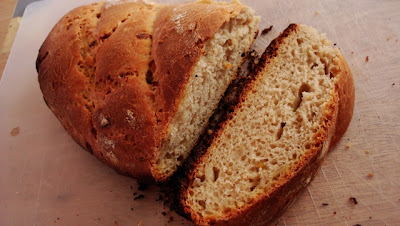 There was just enough clouds to prevent me from taking sun sights. No problem, as we motored and thus the dead reckoning is quite easy and accurate. I am still pondering the problem of the differences in position obtained from the sights taken of the moon and of Venus.


I was up early for my morning watch slot, at 05h30. Raring to finish the cheese and onion loaf that I kneaded yesterday late afternoon and left to rise overnight. The lively starter sponge gave me hope for a proper rising of the dough. The dough proof, that is. I was not disappointed. The dough had more than doubled in volume overnight. I had some difficulty in extracting the dough ball from the plastic bag that it was stored in. I did my best and did not really lose any of the dough. 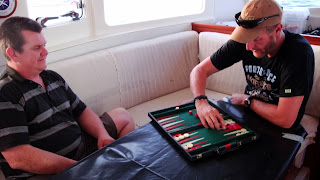 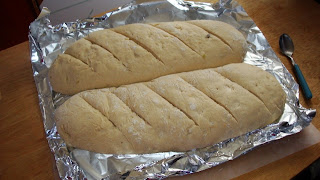 3 cups unbleached all-purpose flour. I don't have access to this, so I used white bread flour.


Combine all the non-flour ingredients, then add the the sourdough culture proof and mix. Now add the rest of the flour a little at a time and mix until the dough becomes too stiff to mix with a spoon.Turn the dough out onto a floured board and knead in more flour until the dough is smooth and satiny. This dough is quite wet from the onions, so it may take up more flour than anticipated.

The dough of my mix was a bit soft, so I kneaded in another half cup of flour. I then kneaded the dough for another five to eight minutes before cutting it into two sausages and shaping these into two long loaves. These were put in the oven to rest for another two hours before I lit the oven and baked them for 50 minutes at 190ºC/375ºF. I made a number of slashes diagonally across the loaves to assist expansion before the oven was lit. After ten minutes in the oven, I basted the tops with water to assist crust forming. I won't chance spritzing the oven with water, as we have to clean the oven back to factory mint condition before delivery. A mammoth task when there is some scale or other residue in the oven. After the allotted baking time the oven was switched off and the loaves left to cure for another twenty minutes. The loaves were then removed from the oven to cool.

They came out magnificent. All my fears allayed, I cut the first slice. An onion aroma filled the saloon and the first loaf was consumed within half an hour. We all sat there savouring the taste. The crust was nice and crisp, not too thick. The crumb was full of irregular sized holes and elastic but soft. The taste was exquisite. A firm favourite with all aboard.

The loaf constituted lunch. No two minute noodles for lunch today. Dinner was my affair, fish curry by popular request. I made fish curry, using the Dorado we caught, with lentils and coconut milk, served with saffron rice. There was a lively game of backgammon going on while I prepared dinner. Our curtain raiser for the main event, the Uno after dinner . League. Tonight we closed the card games with a round or two of Black Jack, until the bank went bust. 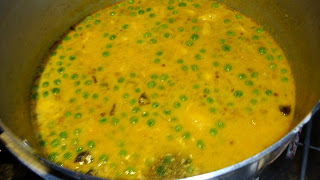 
400 g fish fillets. I used some of the Dorado that we caught.

¾ to 1 cup of fresh garden peas. I use frozen peas, the canned ones do not taste as good.

1 envelope of dried coconut powder dissolved in a cup of water or a can of coconut cream or -milk.

½ stick cinnamon bark. This is about a tea spoon's worth of bark. 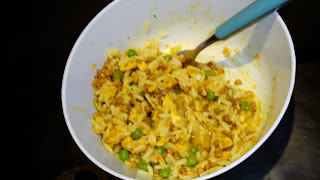 1 teaspoon saffron essence. Or three saffron strands, soaked in half a cup of hot water.

Some salt to taste


Cut the fish into thumb size pieces and marinate them for 30 minutes in a dollop of oil with the green masala. Then start with a dry pan. Add all the whole spices except the whole aniseed seeds and saffron, to the pan and fry them until the flavour starts to come out. Peel the cardamom pod and discard the pod skin. Then add some oil and the chopped onion and chili. Fry the onion until it goes translucent or glassy, then add the chopped garlic, the marinated fish and the dry masala powder. Fry the fish until it is done, then remove it from the pan.If you don't the fish may cook to bits. Now add the lentils and two cups of water. Simmer this until the lentils are almost done, then add back the fish. Add the coconut milk. You need to watch the quantity of fluid in the pan, that it does not get too runny. The lentils will absorb water up to a point, but if the dish goes too dry, the lentils will burn. Then you start over. Lastly, add the peas and the garum masala and simmer for five minutes. Then switch off the heat and let the dish rest for ten minutes.