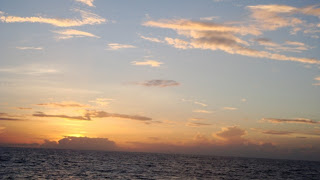 All in a hot and copper sky,

The bloody sun, at noon,

Right up above the mast did stand,

No bigger than the moon.

We stuck, nor breath nor motion;

As idle as a painted ship

Upon a painted ocean.

Alone, alone, all, all alone,

Alone on a wide wide sea!

And never a saint took pity on

My soul in agony

Only today I finally came to understand the full meaning of these words by Samuel Taylor Coleridge, as penned in the Rime of the Ancient Mariner. After forty years my English teacher would be happy, I trust. Something stuck from those days.

I have just come on watch. It is now around 21h30 local time. There is a fat sickle moon hanging lazily above us. A few puffs of cloud hang around like so much cotton candy floating on wings of the sky. The temperature is still about 29ºC/85ºF and it is quite humid. Definitely not comfortable sitting here typing up the blog. 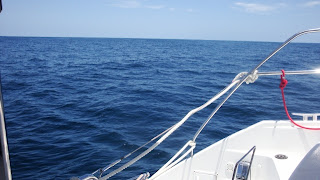 We have at last hit the doldrums. Literally. Come to think of it, I now also understand the meaning of the word “doldrums.” The sea is as flat as the Vaal dam when the wind does not blow there, which is often. Especially on regatta weekends. The water was green since yesterday, a side effect of the water from the Amazon. Even this far out at sea. We are now about eighty miles from the nearest land which happen to be French Guyana. The current that carried us along have now turned north and our effective speed has dropped to around five to six knots. In this flat sea it is easy going and I can almost walk around without holding on to something. Almost, but not quite. 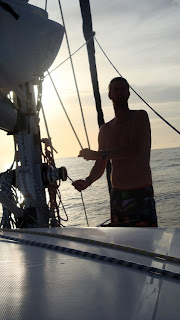 I now have insight into what Coleridge meant when he wrote his Rime. The sailor's ship sailed into the doldrums and was becalmed for some time. And, unlike us, they did not have a engine. The internal combustion engine was not yet invented then. So they just sat there, their water and food running out, baked to a medium barbecued state by the relentless sun in a cloudless sky. Not something that you would do for fun.

The Rime also infers that they did not know where they were, else they would have stayed clear of the area. This would probably be due to the lack of proper charts and navigation equipment of those days. Accurate clocks had also not been invented in those days, which gave rise to the practice of parallel sailing. You would sail south or north until you reached the required latitude, then due west or east, parallel to the lines of latitude. For example, the sailing instructions to reach the West Indies and the Caribbean from Britain would be to sail south till the butter melts, then due west. Simple, but effective. Until, of course, you get too far south and land up in the doldrums, in one of which we are now. A good lesson for long distance cruisers; stay clear of the centers of weather patterns, there aren't any wind there.

Dawid took a swim in the ocean today. You need flat calm water to do this, not for the swimming part, but to get back in the boat. A bobbing boat will give you at least a decent concussion, if not a skull fracture. But today was calm enough. Dawid wanted to see what the deep sea looks like. He got his look. It is blue-green and there is nothing to see. Not even a fish or a mermaid. But then one must bear in mind that mermaids are rather scarce, I believe. And we have ample water on board, so he was not sufficiently dehydrated to start seeing sights, even if it is hot and humid. 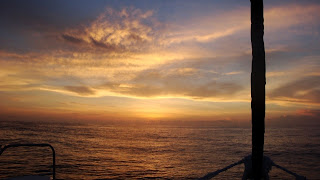 Both the sunrise and sunset today were magnificent. I did the paparazzi tourist t5hing and took pictures ad nauseam. Now I have a large stock of pix to miff people when they complain about the weather! Jokes aside, I had a good innings today in this regard. It is not every day that one sees the sea this calm. Pity I can't take any pictures now. My little pocket camera is not up to the challenge of taking decent pictures in low light form a bobbing platform.

We are now about seven odd days' worth of sailing from St Maarten. We are definitely looking forward to the break, especially food that we did not cook ourselves. And, of course, a beer or two and a long sleep.