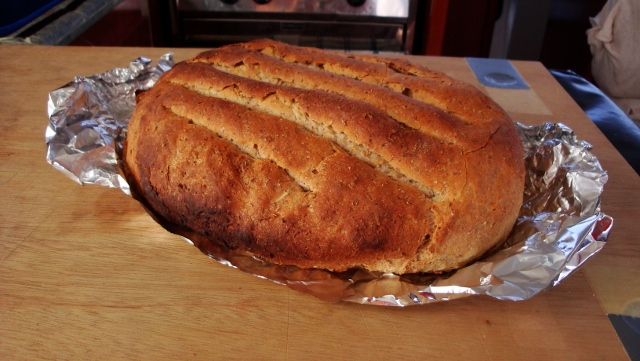 Actually, one needs to add dolphins to the title, but then it would be too long and uncomfortable. We had an interesting day. I baked another rye loaf, I cooked dinner and a large pod of whales came to visit, joined by four or five dolphins a while later. The rye loaf happened in the morning, the rest all in the late afternoon during a small squall.

A large pod of whales means more than fifteen humpbacks. About five meters from the boat. Quite scary, but we got the idea that they were just visiting us in the passing, not wanting to play. One has mixed emotions when seeing these large animals at such close quarters, but they are beautiful. They were followed by a small group of dolphins, also on their way in the same direction.

Nice to have visitors in this deserted part of the ocean, far away from the busy shipping lanes. I also caught our first dorado today, during the visit of the whales. It was only a baby fish, so we let it go safely back in the water. It started swimming the moment it had reoriented itself after getting back in the water. 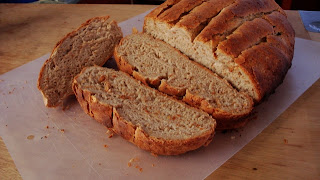 The rye loaf was done on a fast track. I used instant yeast this time. The flour was a mix of one cup rye, one and a half cup brown bread flour and one cup white bread flour. The kneading board was floured with rye, which added another half cup of rye flour to the mix. I mixed this lot, adding some salt and the dry instant yeast, followed by 1 cup of lukewarm water. After kneading this on a well floured board, I let it rise in ambient conditions, which is around 25ºC /77ºF at the moment. We are nearing the equator and winter is basically over for us. The instant yeast performs well and the dough took an hour to rise to double its original volume. The dough was then kneaded down, shaped and put to rest for 30 minutes, then baked for 40 minutes, starting with a cold oven. I baked it at 190ºC/375ºF for 30 minutes, then at 210ºC/ 410ºF for another ten minutes. The oven was switched off and the loaf left in the oven to rest for ten minutes before being taken out to cool. It came out quite nice and brown, not overbaked, with a medium thick crust and with a very spongy crumb. The brown and rye flour made it quite heavy.

I was lucky to get a picture or two before it was devoured. 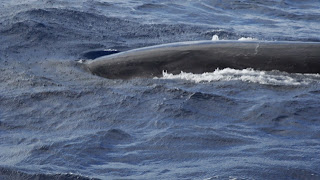 On the navigation front I managed to get some sextant readings early this morning, before the sun and the moon went into the clouds. The clouds were quite low, but had a gap to the horizon, where the sun on one side and the moon on the other peeeked through. As it is still close to full moon, one has the opportunity to take sun and moon sights at the same time. Not that it is of major help, since the two bodies sit at almost 180 degrees apart and therefore are not of much use for navigation. You want them spaced closer to 90 degrees to be useful. But the sighting practice is more important. I eagerly went to the reduction tables, only to find that both sets of sightings re of no use, as the heavenly bodies need to be more than 9 degrees above the horizon. The tables only start at 9.5 degrees. This is because there is too much distortion through the earth's atmosphere at the lower angles. Drat.

Luckily the clouds cleared at about 09h00 local time and I could get decent sun sights. These, along with my dead reckoning calculations since departing St Helena, put us within 6 nautical miles from the GPS fix. Not too shabby for three days' worth of dead reckoning, I should venture. It pays to keep fit in the ancient methods.

Today was also my turn at the galley. I made beef curry with lentils, served with brown and wild rice mix. 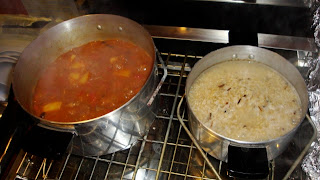 3/4 cup lentils. I used black lentils, but you may use any.

1 can peeled and chopped tomatoes. We don't have fresh tomatoes, in which case you should use two or three. Don't worry about peeling them, just cut them into thumb size pieces.

Some vegetable oil, peferebly not olive oil. The flavour clashes with the other spices. 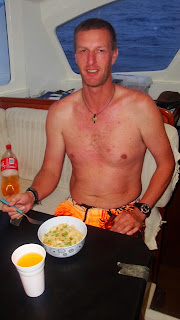 Cut the beef cubes into thumb size pieces. Marinate this in the green masala and a dollop of vegetable oil. I marinated the beef for 30 minutes.

Start cooking using a dry pan. Fry the cumin, cinnamon, aniseed, fenugreek and coriander seeds in a medium hot pan until the flavour comes out, then add the onion and a dollop of oil. Fry the onion until it goes glassy, then add the chopped chili. Fry these for another minute, then add the dry powder spices and the meat. Fry these until the meat is brown. Add some oil if the pan is too dry. The dry spices soak up a lot of moisture and they must not burn, else you start over. When the meat is brown, add the tomatoes, potatoes and lentils and some additional water. Simmer until the lentils are done. Thicken the sauce by mashing a couple of the potato cubes. Then add the garum masala, stir the dish, switch off the heat and let the dish rest for ten minutes to develop flavour before serving on a bed of brown rice.