2nd Leg Day 4: The Day of the Big Dorado 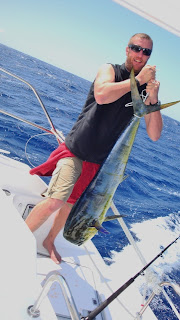 Today must surely go down in the history of this voyage as the day of the big Dorado. 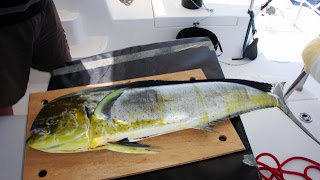 The day dawned slightly cloudy with the barometer at a steady 1018 hPa, promising steady winds. The promise was not empty and we had steady south east trade winds of around 20 knots all through the day. The clouds gave way to the sun and the sea turned a bright blue turquois colour, with white sea horses all over. The swell was in the region of two meters and we were sailing along merrily at between five and seven knots. Brilliant sailing weather.

I took my routine sun sights around 10h00 local time, which is 11h00 GMT or 13h00 South African time. This time I had a good view of the sun and the horizon and was able to zero my sextant properly. The resultant plot and fix, working from yesterday's fix, put us a tad under 10 nautical miles from the boat's GPS. I have now been doing a parallel navigation to the boat's GPS and Renier's backup PC. My backup is on paper. No electricity involved. It makes a good hobby and gives a skill in understanding the capability of the instruments and the human brain. Much to be said for the use of the brain, thank you very much. 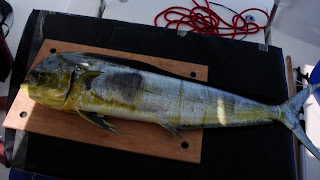 I was still packing away my instruments when the reel on the fishing rod started screaming. I made the necessary noises to raise the alarm and the fight was on. This time the fish did not get away. We furled the sail, stopped the boat and started the engines. By this time Renier was prepared with his fish fighting bucket and gloves and the fight was on, going astern as required after the fish. It took us over 20 minutes to get the fish close to the boat. Only thren did we identify it as a Dorado. 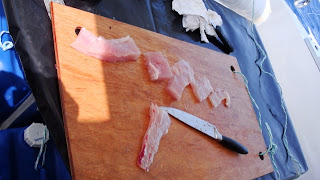 This fish gave us all a hard time. Firstly, it didn't jump as Doradoes normally do, making it a little more difficult to bring in. Secondly, it swam all around the rudders and propellers and got itself properly tangled. Renier was getting despondent about landing the fish and called for a knife to cut the line. By this time, however, the whole ship's company was on a high and wouldn't hear about this. We fetched the boat hook and soon the fish was secured to the stern rail, hanging by its tail. None of this catch and release stuff for us. Especially not after what it had done to us, tangling the line in the propellers and rudders. We want revenge. That is, apart from the fact that we are simply hungry for fresh food.

Then came the task of untangling the fishing line from the rudders and propellers. We resorted to a combination of moutaineering techniques and bushcraft, taping a steak knife to the boat hook to cut the line from the propeller. Much like Rambo. We had a line tied around first Dawid's waist and had him lean overboard using his diving mask, to see what he could do. The swell did not make it easier. Later Renier took a turn and had more success due to his extreme reach. There was no time for pictures then, as Dawid was holding on to Renier's safety line and his ankle, while Renier was hanging upside down over the bucking sugar scoop stern with his head and shoulders under water. He was cutting fishing line from the propeller. I was passing tools as required. Just as in a hospital theatre, I suppose. A sight to behold, I wonder! 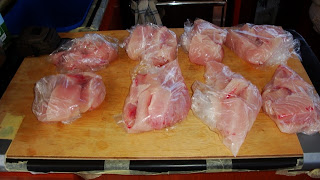 All's well that ends well and soon we had all the fouled lines cleared and could continue our voyage. Then the papparazi started and lots of pictures had to be taken. The papparazi being Dawid and me. We guessed the weight of the fish to be around twenty kilos. Renier had difficulty in holding it up long enough to take a proper picture, with the boat bucking in the swell and the size of the fish. It lay the full length of the cockpit table, with the tail hanging off the table.

All of this cost us perhaps an hour, after which we were under way again, with the dressing of the fish lying ahead. The fish yielded eight meals' worth of fillets, which put us in good standing with our supplies. We may need fish for another meal or two for safety, so we shall fish some more.


Dawid and I had some offcuts for lunch snacks in the form of sashimi, complete with wasabi and soy sauce. I like this, so I was sorry to not have cut more morsels off the carcass before we discarded it overboard. Dawid had some and declared it edible, even good. But he added that this was an experiment and that he would not trade this for a good hamburger. 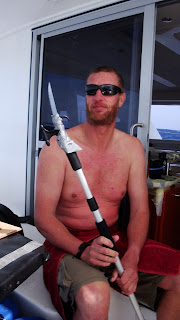 Tonight, for dinner, we had fresh fish fried in a batter. No surprises there! This was served with potatoes boiled in the skin and a coleslaw side dish. The batter was made with an egg and some cornflour (Maizena) to which we added one teaspoon of fish masala powder and one teaspoon of gound cumin. The fish was marinated in this for twenty minutes before it was fried in light oil.

The coleslaw was made from finely sliced cabbage (duh!), a grated carrot, our very own home grown mung bean sprouts and some dried fruit cake mix that we bought on St Helena. A dollop of mayonnaise completed the side salad.


The end result was very tasty dish, with the batter sealing the juices in the fish and providing a tangy flavour to an excellent fish. The overall impression of the meal was as good, being a nice summer style dinner. Pity we weren't ashore. Then we could have enjoyed a nice cold Chardonnay or Sauvignon Blanc with it.