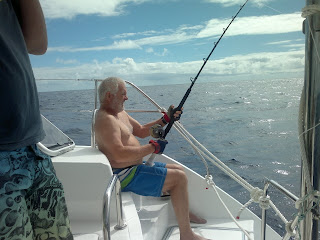 Or, saying it differently, catching a fish, almost. Or perhaps: Catching a fish and losing it. Or the lost fish.

Any which way one expresses this event, the fish got away. Period. At least I had the privilege of seeing the fish, albeit fleetingly. And that was the last take of the day. Tomorrow we shall fish again, but for tonight we have other food.

Sometimes I wonder just how people egt to make a living out of fishing. The game fishing industry I can understand. You pay to get out into the wild blue yonder and fish. The boat earns an income and you had your sport, even if you did not catch anything. But subsitence fishermen has a different perspective. If they have a blank day, so has their purses. In fact, it is worse, since they are out of pocket for the running budget of the boat, combined with a lack of income. A double whammy.

Today, I was just frustrated, but there is hardly any skin off my nose. Not so for the man with no other income, spare a thought.

There was some cloud around all through the day. High cirrus clouds, diffusing the sun just enough to prevent a sun sight. I shall again revert to dead reckoning techniques only. We had some decent wind, but mostly calm conditions. The barometer went down to 1017 hPa, aporent of wind to come within 18 to 24 hours. This was confirmed via satellite phone with our friend Malcolm on a yacht about 280 nautical miles behind us. The forecast is for decent wind for five days starting Friday.

The loaves of two days ago have been polished off, including the crumbs. I shall bake some more in the next two or three days. In a different style, just for the variety. I am able to experiment a little, as I literally have a captive clientele. I made such a remark, which was received with some raised eyebrows. But all in jest. If the food is not to taste, the clientele does not eat very much. When the food is very good, they almost fight for the last morsel. A much better indicator than to ask for feedback. Renier has a severe toothache, so he sometimes has difficulty in enjoying the food. But when the food is good, he has two helpings, notwithstanding his discomfort.

Dawid and I are worried than he may take a turn for the worse. We shall keep tabs on the situation and make arrangements accordingly.

I had another one of my two minute noodle and fresh veggies slads today. Quite filling and apt for the warm weather conditions.

I finished reading Seven Pillars of Wisdom by TE Lawrence today. Interesting book, written in the English idiom of a hundred years ago. Lawrence gives a blow by blow account of the war in Arabia, interspersed with his views on nwhat was happening and why. But the most interesting part must be his descriptions of the countryside and his own sentiments and thoughts. Here he excels in rich language that make you feel like you are seeing the place through his eyes and are there with him. Ditto for his sentiments and emotions. You live through the hard times and deceptions with him. The last chapter is very much a psychological and sentimental divorce and goodbye to a life lived to the full in the desert. Very strong emotions.

One gets the samesort of feeling on board, even though we are not having the same hardships as he had in the desert. We don't live a deception either. But we do live close to Nature and her whims. And feel all her emotions directly. On a boat the size of ours one is very much aware of the quirks of the wind and the sea. And also very aware of thefact that you are not in charge. Quite humiliating after a fashion. I think that this is why the sea is not for all people. A friend once remarked that the meek shall inherit the earth, but the brave shall get the oceans. Atrue word, methinks.

It is all too easy to look brave when you do things out in the veld. I used to hunt. First with a rifle, later with a bow and arrows. Walk and stalk. A bit like flyfishing in a wild stream. In this world of outdoorsmen I met some avid big game hunters that thought nothing of facing off a charging elephant, lion or buffalo and to shoot it at ten to fifteen meters. Something that would make most people cringe. Those events would impart the same sense of not being really in charge in the mind, but perhaps for a short while. Of course, one has an adrenalin high for perhaps a week afterwards. Crossing an ocean in a small craft can be daunting as it takes at least two weeks of this facing off of nature. For this leg of our voyage, a full month of not seeing land. A different mindset altogether, I imagine. But perhaps an extended adrenalin high, which would give the yearning withdrawal symptoms described by John Masefield in his famous poem Sea Fever, already quoted in a previous blog.

And yet, so many people have this yearning for something that they perhaps do not even understand about themselves. A yearning for some exitement, but a fear to take the steps necessary to feel the excitement. Susan Jeffers described this very well in her book Feel the Fear and Do It Anyway. A book about the subject of extending your comfort zone and not being the captive of your own fears. She describes at length the stress induced by indecision, something that eats away your will to step out. A very big caveat.

I am not advocating that everyone should take up ocean sailing as a hobby, but rather that one takes the courage to cast off the fetters of your own fears and live some part of your dreams at least. There is much to say for use-stress, where you live in the adrenalin high of your own excitement and extacy.

Time to get out of the boat and walk on water.