2nd Leg Day 18: Second Round Mince Balls After a Near Gale

Today started by motoring overnight in near gale conditions, the wind gusting to 35 knots, pitching up big waves. We surfed down some at 14 knots. In the dark. This is scary at first, but later on you get blasé about it and then are miffed when a big wave come and you don't surf.

The weather cleared as the glass rose. Barometric pressure for those not of the fraternity. The wind subsided sufficiently to put out some sail again and at present we are surfing three meter waves at around ten knots.

My navigation skills are still holding up. The sun sights and dead reckoning put us within 12 miles of the GPS. We are now whisked along by the wind and current and covered as distance of 213 nautical miles noon to noon. This is a record for Renier and definitely for me. The previous best day I had was just over 180 miles on a previous trip. I think this is the quintessential part of sailing long voyages, the daily log and the associated bragging rights.

We are now basically crossing the Amazon delta. This should take us about four days at the rate we cover ground at present. It is a big river. Also, we are near the equator and shall be crossing it sometime tomorrow. We shall have some sort of celebration, perhaps with a special dish for dinner. We still need to think about this one. 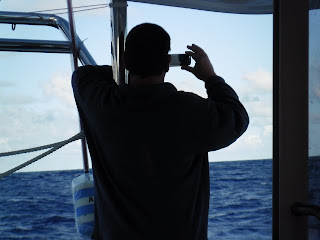 We are also in serious big game fishing grounds. Just this afternoon we saw a huge hatch of flying fish, bait fish for the food chain. There were some dolphins around as well, probably chasing after the smaller gamefish that in turn chase the fry. The dolphins were certainly not in a mood for visiting us , like the other day, where they played around the boat and in the slipstream around the bows. Dawid has itchy fingers for this tuna of his dreams. He sees tuna as sashimi on the wing, so to speak. Like I regard an impala or a cow as biltong on the hoof and some of my flyfishing friends regard cats as dubbing on the hoof. Something akin to that. He certainly has a soulmate in this one. Renier does not eat raw fish and would rather heave it back into the ocean. Which leaves more for Dawid and me. We even have wasabi powder on board, a relic from a previous delivery. 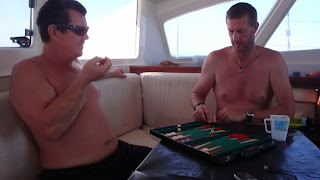 Today was my turn at galley duty again. Beef mince balls, fried butternut and smash. We had some fun and games in the galley tonight, with the swell on the quarter and the boat bucking. Shortly before I started preparing dinner, we were sitting on the aft deck having a relaxing late afternoon. I like to call it the promenade deck, because that's where you will be sitting with your G&T and a nice Cuban cigar at sunset, dressed in your best tropical outfit of unbeached linen. The whole Hemingway thing

Anyway, to get back to the story, we were sitting there taking side bets on when and how fast we shall be surfing down the waves, when a wave broke over the boat. Over the boat means over the boat. The splash and foam was more than ankle deep on the aft deck and almost went into the saloon. Some of the spray went over the bimini top. And I was soaked from head to toe, being completely enveloped in the wave crest as it came on board. To the great mirth of my shipmates, I have to add. A little later we had something similar happen when dinner was almost ready. The boat bucked heavily and rolled far over, casting all the loose items off the saloon table and the smash off the galley top. Renier and Dawid held on to their plates of food for dear life, I held on to the stove to keep to my feet. Luckily the smash was in a large plastic bowl and came to no harm. The cooldrinks went sailing over the deck and down the companionway steps into the cabin sole in the hull.

After that we reefed the sail to have some semblance of normality during dinner. 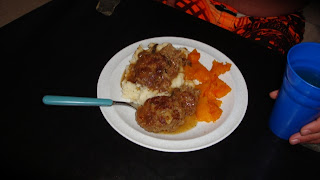 dollop of butter or cooking oil to fry the mince balls

Some water for the butternut


Add the mince, chopped onion, chili, garlic, soy sauce, oat meal to the beaten eggs and mix thoroughly. The mix should be tacky to enable balls to be rolled.

Use two wet spoons to make small balls of the mince mix and roll these in the cornflour to cover them. Fry these mince balls in light oil and remove from the pan when done. When all the mince balls are done, add the beef stock/gravy powder to the pan along with the water and bring to the boil. The sauce should be picking up the crumbs from the mince balls. Add water to taste to make enough gravy. Turn off the heat and add the mince balls back to the gravy to soak and develop some flavour.

The smash is prepared as per instructions on the packet. Some milk makes it a bit smoother. We use two packets for the three of us, to soak up the gravy from the mince balls. If there is gravy left, use a slice of bread to soak it up to the last lick.