The Prologue To A Delivery 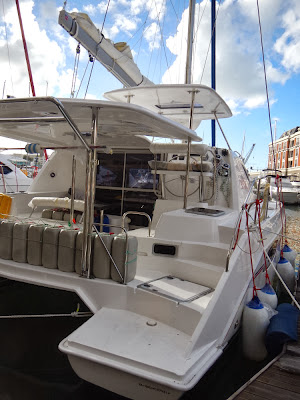 My third delivery. The third voyage crossing the Atlantic. And a third set of experiences, all new.

Always the new experiences. This time it is a welcome change from the tedium of convalescence after my knee replacement operation in March. The last month or so was quite nerve-wracking as I wanted so much to get on the water again, but either the weather was not suitable or we had some family business arranged.

In any case sailing around False Bay for a day or so is one thing, A crossing of the Atlantic is something else. You need to be reasonably agile for a long trip and I was battling to get my knee joint working properly again. I went sailing once or twice, but found that I was little more than ballast on the boat.

Very frustrating, until I decided that swimming with small fins and a kickboard will provide ample exercise for the recalcitrant knee. So, for the first three exercise sessions I paid a dear price in having all sorts of little aches and pains. Then the pain went away and my knee was now more or less functional again.

I was on tenterhooks until the phone rang one fine morning. It was my friend and regular captain wanting to know whether I was fit, there is another delivery in the offing.

Wonderful news indeed. Of course, the Pope is catholic and my answer was positive. Declining  another trip was simply not on the cards. I had prepared for this and was not going to let small things get in the way.


The skipper signed for the boat a few day later and we could take the boat to the marina for final preparation. Dry food, cutlery and crockery, kitchen utensils were purchased on short notice, the fresh food left to just prior to our departure.

And then the weather took a turn for the worse. Cold front upon cold front, never abating. Ten days now. 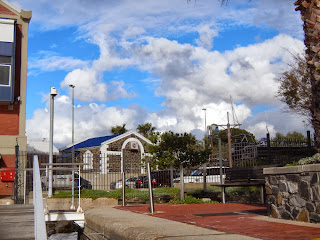 Then the barometer dropped and the mother of all cold fronts hit Cape Town. Earlier today, Friday 20 September, I saw some sleet on the quay. The weather is now, middle of the afternoon, clearing somewhat. But the day is still cold, with an icy wind blowing, Next to me the barometer reads 1016hPa, up from a low of 1007 this morning. Hopefully this trend will be stable to allow us to leave in the next day or so. So far, it looks like Sunday.

The vagaries of sailing, says a friend of mine. Grin and bear it. Relax.

Having lived through these last few days, only I now am beginning to realise why all cruising sailors are so laid back. On the face of it not caring.

They taught themselves to relax and go with the flow of nature, not against it. The apparent careless ness has to do with watching and waiting for the right weather. Then nature helps you and you have a wonderful trip.

Now I am beginning to relax too. I travelled between the boat and our house like a yo-yo, sleeping here, then there, never knowing when there will be a good weather window to allow us to depart. Keeping two sets of clothes going, one set on the boat, another set at home. And two sets of bathroom kit. My cats were wondering what was going on, giving me cold looks and keeping away from me. Well, until the weather got cold, then my lap was good enough again.

I guess there were frustrations all around. I was chided the other day when I arrived for the second weekly braai in a row at the yacht club, after announcing my departure earlier. The guys wanted to know whether I was joking about the delivery. Not funny after the third or so joke.

But all that is history now. The boat is provisioned and fuelled, the crew is all aboard. Last minute shopping will be completed just prior to departure, then we cast off.

There is something symbolic in casting off. It says that a decision is made and that this voyage of forty days has begun. There is no turning back, just onward. Make a plan and carry on. 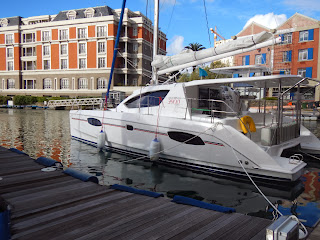 And the freedom of your soul at sea to look forward to.

I like to live like this. The lifestyle grows on you. The experience of the voyage more than makes up for the frustrations of the build-up, preparations and waiting.