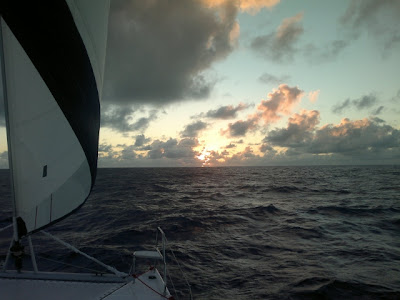 An interesting way to look at the day, which dawned on a normal mid-Atlantic. The bluest of blue water, some clouds, not too many, hardly any wind. A balmy day in anybody's book.

Then came the news from home: Snow in Pretoria and, by the news snippets that we get from all over via text messages, most of the country. In fact, every province. And here we sit in balmy weather.

Renier had a do-it-yourself haircut and a shower. I had a shower. Dawid is keeping his until he may have a swim in the warm mid-Atlantic water where we are at present. He is waiting for a very calm day to take a mid-ocean dip. Just for the heck of it.

We saw a ship towards the middle of the morning. The first traffic in two weeks, except for the few boats at St Helena. But they don't count because they were moored in the little harbour of Jamestown.

On days like this it becomes very difficult to keep oneself sensibly occupied. We have done all the required boat husbandry things that we could think of. Even to the extent of washing the dishcloth.

I have stopped growing sprouts for the moment. We have a supply of fresh sprouts in the refrigerator and a loaf of fresh bread stored in the oven, so my gardening skills and baking skills are in oversupply for now. 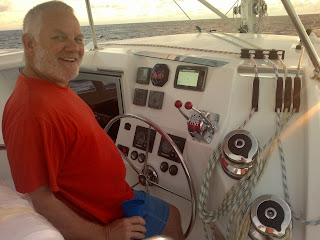 And we read a lot. But it is different now that we have the e-reader.

The e-reader is an exquisite piece of equipment, but different books have different covers, each book with a different look and feel. And while I now have a lot more books to read, they all feel the same in the hand. There are both positive and negative effects associated with the e-reader. Perhaps accentuated by the fact that the e-reader is used a lot on board. As in industrial mode, so to speak. But let me not knock the equipment. This is the next level of battle against boredom on a voyage like this.

From my side, I am three quarters through Seven Pillars of Wisdom by TE Lawrence and about halfway through The Elegant Universe, a book on string theory. String theory extends the world of physics and thus far provides a bridge between Einstein's general relativity and the world of quantum physics. These two worlds have fundamental clashes and string theory may be brought to bear on solving the paradoxes. But the jury is still out and it appears that a lot of very bright minds are working ever so hard to come to terms with the mathematics and experimental proofs.

I'd rather keep on sailing. Much less taxing on the mind. But the reading is good. I also have some very light reading, which I shall make use of as soon as I get my fill of quantum physics.

My navigation skills are still intact. Perhaps the skills are being honed into a fine art. A fine way to keep gainfully occupied. But perhaps not for everyone. In my defence, no excuses, I may add that I rather like doing the calculations. 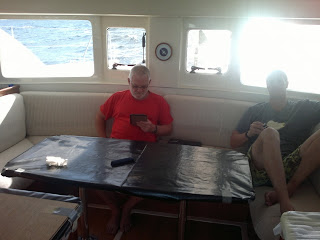 I took two sun sights this morning, when the sun was away from any clouds. These were duly reduced to plots on paper, along with my dead reckoning calculations stretching over 25 hours. I was a wee bit worried about the accuracy of the dead reckoning, as it depends largely on the accuracy of one's guesswork and assumptions on speed and direction. I introduce as much variation into the measurements as possble and practicable, then average the readings. This gets rid of a large proportion of variation and helps with the accuracy of the plot.

This time my worries were unfounded. The resultant fix differed from the boat's GPS by two nautical miles. Chalk up one for good measuring practises.

On the entertainment front things are cooking. We now have a backgammon league and the odd poker game going. With the requisite boasting, posturing and tongue-in-cheek jibes, I might add. Clearly a let-off from the boredom that sets in when the weather is calm for a too long stretch.

We had pork chops, potatoes boiled in the skin and gem squashes filled with sweetcorn for dinner. An easy dish but quite filling. Dawid wants to lose some weight, so he picked the smallest chop, under much cajoling and laughter. But all of us seem to be a bit thinner around the waist, even though we may not really be lighter.