The Seychelles Shakedown Round II 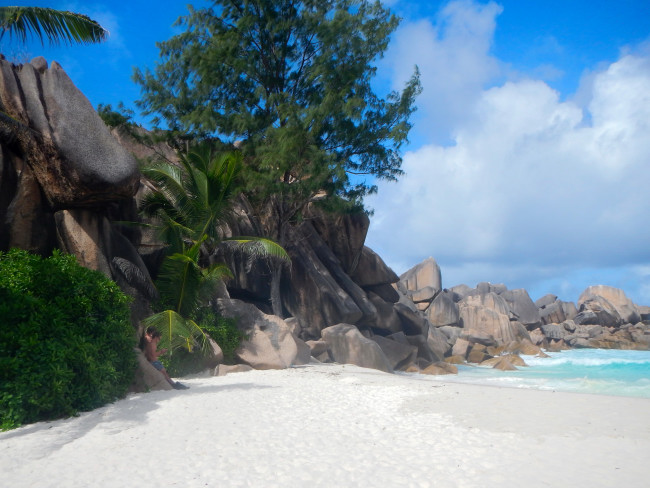 We anchored off Ile Felicite for lunch yesterday, but the tide turned and the wind shifted, so we motored across to the next island which was the famous la Digue. We anchored just outside the picturesque little harbour and spent a quiet night, if a bit choppy.

Dinner consisted of a chilli con carne a la the Hungry Sailor, after which we took an after dinner drink and went to bed. Between the sailing and the snorkelling life took nits toll and our physical energy levels were quite depleted. 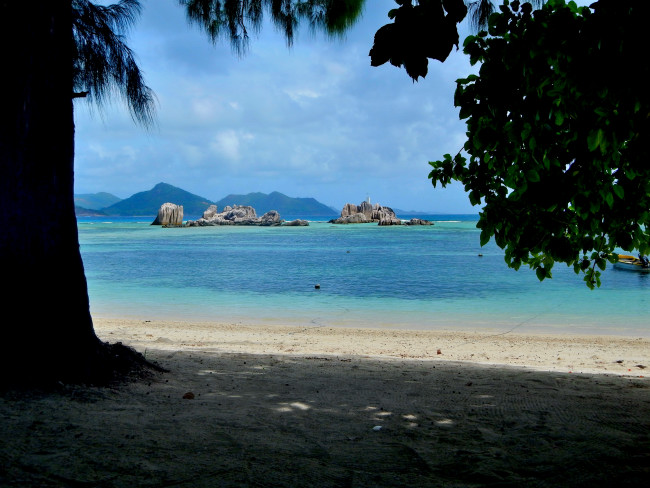 The next morning dawned on a beautiful sunny day with some clouds. An exploration of the island by bicycle was called for. We moored Mediterranean style inside the harbour, a new experience for both the crew and myself. You swim the lines ashore. Not a real problem, as the water inside the harbour is tepid, not just warm. I have had colder tea than that! 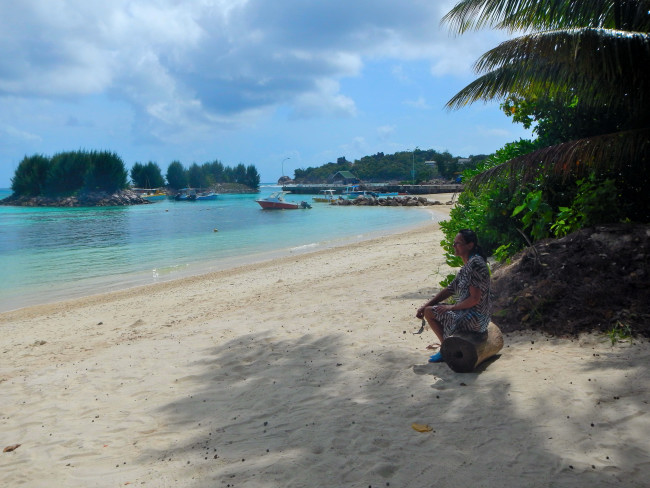 Soon we had a few beers in the saddle bag, along with beach towels and were on our way to explore the island. Bicycles appear to be the transport of choice on the island. You can reach any part of the island on foot within an hour, but a bicycle is much faster, even if you go slow as most islanders do. All bicycles are fitted with a shopping basket on the back, which I like to call the saddle bag. Very handy when you go shopping.

The island also has ox carts. These carts work like an open bus and can take about ten passengers. The oxen are quite stocky built, about half the size of the Afrikaner bull of South Africa. They are quite docile and takes to petting like a duck to water. However, this can get quite rowdy when the ox wants more petting... 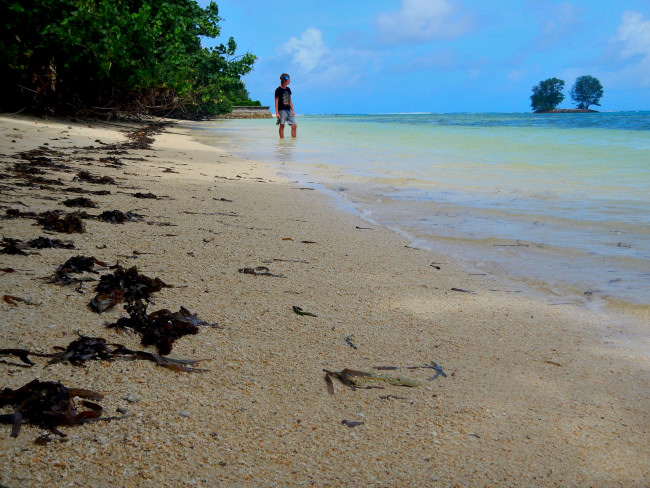 We pedalled to a beach named Grande Anse. One of the most beautiful beaches I have ever seen. The white sands are cradled between two arms of granite boulders, the waves breaking in the light blue to turquoise water. The boulders are majestic in their beauty, resembling a line of cathedrals.

We just sat in wonder for a while, before taking some pictures. Swimming is quite dangerous at this time of year, with the swell and the wind making for big, muddled surf and dangerous backwash. 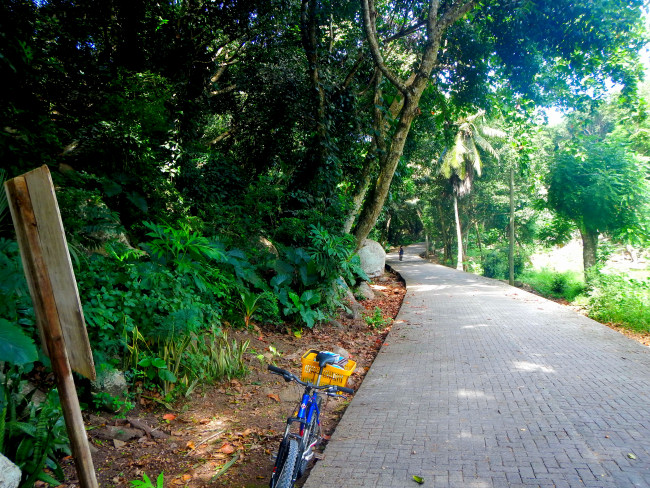 Lunch was along the way at a quiet restaurant by the roadside. Traditional Seychelles food on the menu, we all had something different. The stewed fish was quite tasty, as was the octopus curry. The prices were on the high side.

And all of this amongst the most beautiful sunsets imaginable. I suspect that this is always the case in the tropics, with some cumulus clouds around the islands and no dust or smog in the air.

From here we went snorkelling at the island group Ile Cocos. Three very small islands close to Ile Felicite. The most wonderful spot for snorkeling. From there we sailed to our overnight anchorage at Ile Praslin. 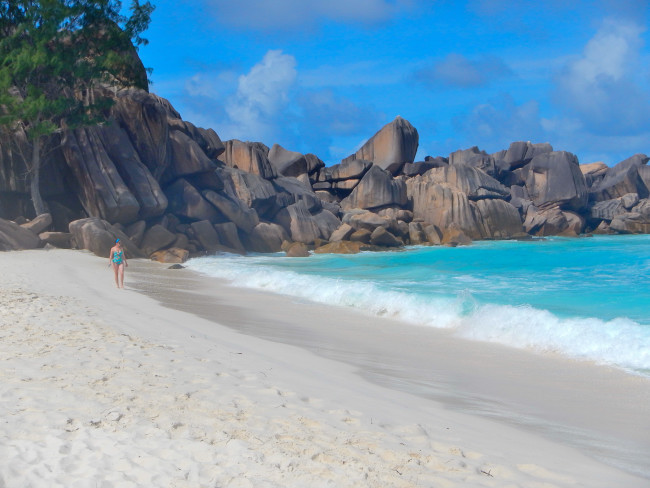 Of course, this is a shakedown cruise and true to form we had some interesting experiences along the way. Not the least of which is a battery isolator switch that broke and thereafter made intermittent contact. We tried some “boereraat” repairs, but even those did not solve the problem completely. So now we have to permanently connect the batteries in order to have any electrical power on board and to start the engines.

Yet another idiosyncrasy to contend with. 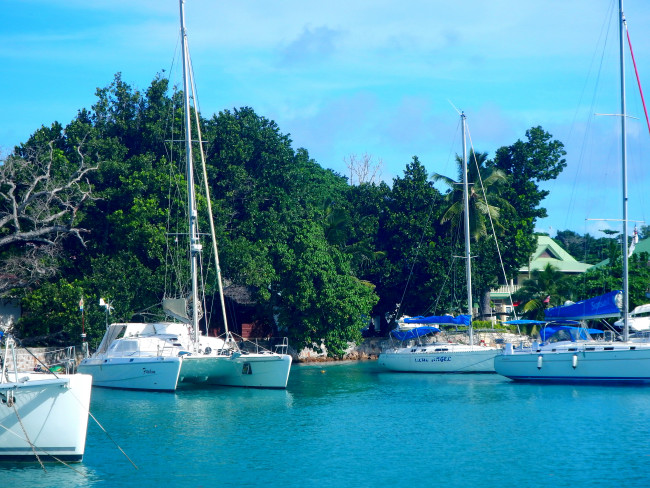 So far these have not dulled the sense of adventure or the spirit of fun aboard.

Today was declared a rest day. Which means we unpacked the hookah pipes and limbered up the dive compressor. Soon we all had a go at looking at the oceanic fauna and flora underneath the boat. 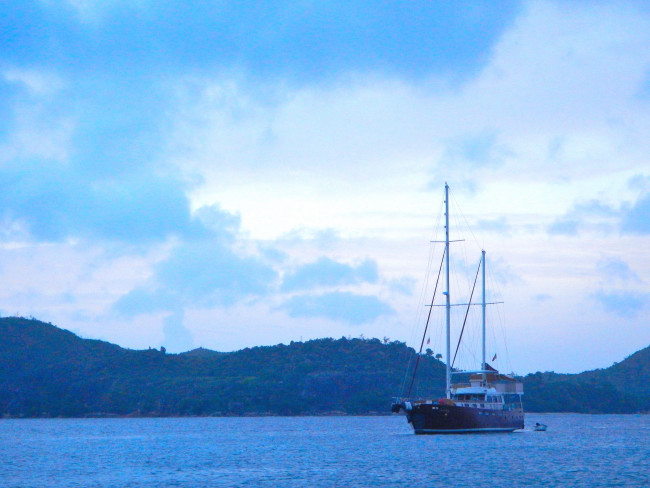 Several dusky batfish were calmly hiding in the shade of the boat, patiently waiting for a morsel from their host. These fish will come up right to the surface for a breadcrumb or two, fighting to be there first. Quite handy to know if you want to take some underwater pictures.

For now, we are having a great adventure of discovery in a part of the world that one can easily dub paradise. And yet the long voyage is lurking. The big adventure itself.

So far all systems seem to be working properly and we have hopefully identified most latent problems.

So here's to looking forward to yet more adventure aboard and abroad. 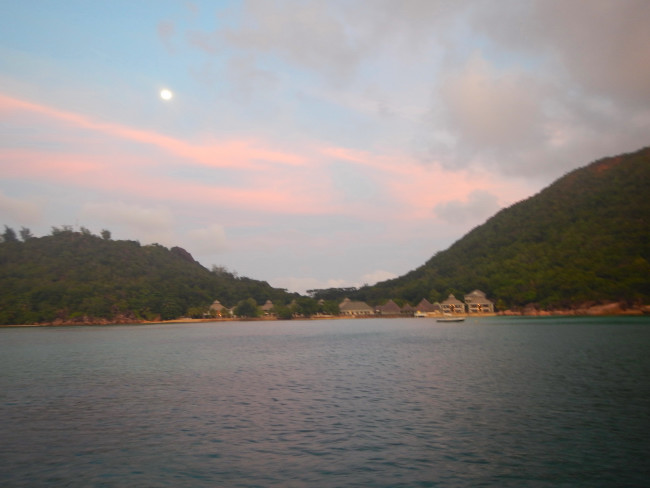 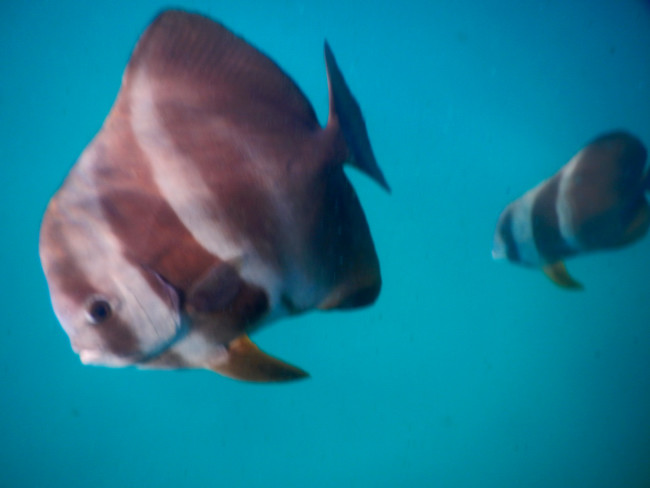