Sailing Out Of The Doldrums 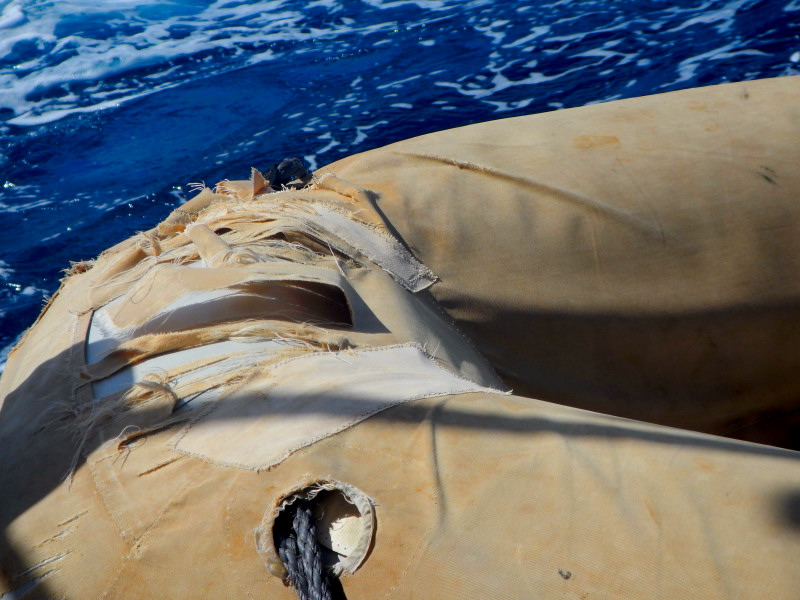 Our doldrums woes were not over yet. The wind died on us yet again.

It is most frustrating not to have a weather forecast. It eats away at one's psyche.

We have been taking it very easy for the last few days, just relaxing and catching up on lost sleep. The lazarettes were repacked to have the stuff judged for most urgent use at the top. We also checked all the blocks and shackles on the mast and sheets after finding a loose split pin on the deck. The culprit was soon found and the problem fixed. 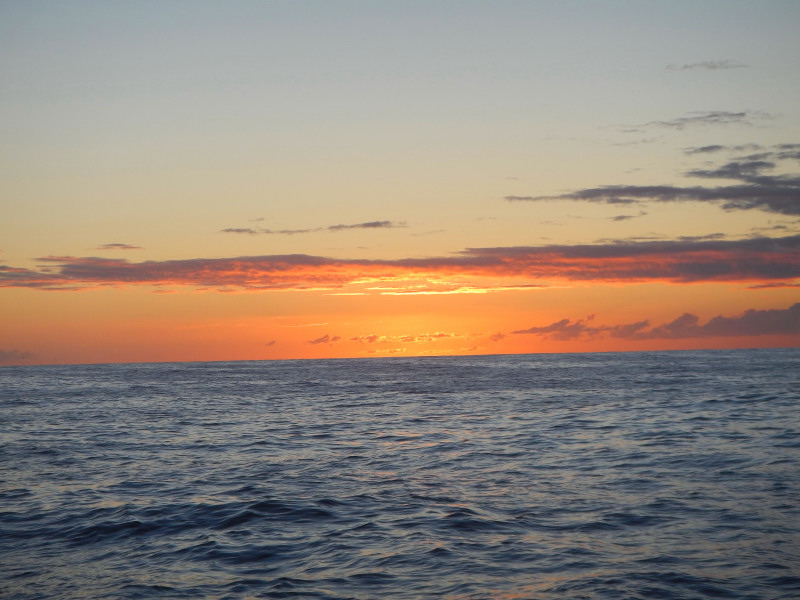 We lost a shackle after the mousing came undone and the shackle pin unscrewed itself.. Not something you need often.

The worst problem was identifying the source of the oil slick we were trailing. We tried every possible source, then checked them all. In the end we decided it was the last bit of spilled fuel from an earlier break during a storm. We then washed the bilges properly.

Yesterday we motored for seven odd hours in an effort to find some of the Agulhas current. We had drifted back several miles during the night, a heart breaking occurrence, if any. Our gamble paid off and last night we drifted at around one knot in a southerly direction. Free transport for a change. 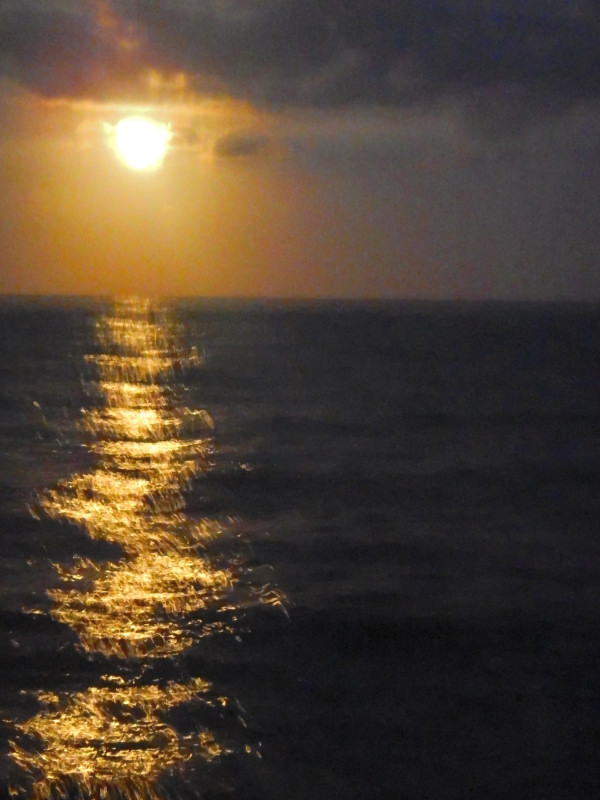 This morning we ran the motors again as is customary to charge the batteries. Then a nice breeze sprung up from the ocean.

What a relief! At the time of writing we are merrily sailing along at around six knots in a more or less south westerly direction. Hopefully Mother Nature had taken pity on us and will keep the wind  going to take us home.


We still are seeing the most magnificent sunrises and sunsets. Both are a vivid red. A wonderful sight. Sometimes there are absolutely no clouds. Then the sky is lit up from a dark blue through all the yellow and orange to the vivid red. Difficult to tell the greens, though.

Perhaps this is where the green flash stories come from. Or maybe my eyes are just not accustomed to seeing hues.

Of course, having clouds around always make for a picturesque scene. The cloud patterns conjures  up amazing beams and rays as the sun comes up or sets behind them. There are so many photo opportunities that one needs to be a bit harsh and not take too many photos.

I think the red sky may be due to the fact that we are looking over dry land at the sunrise and sunsets. 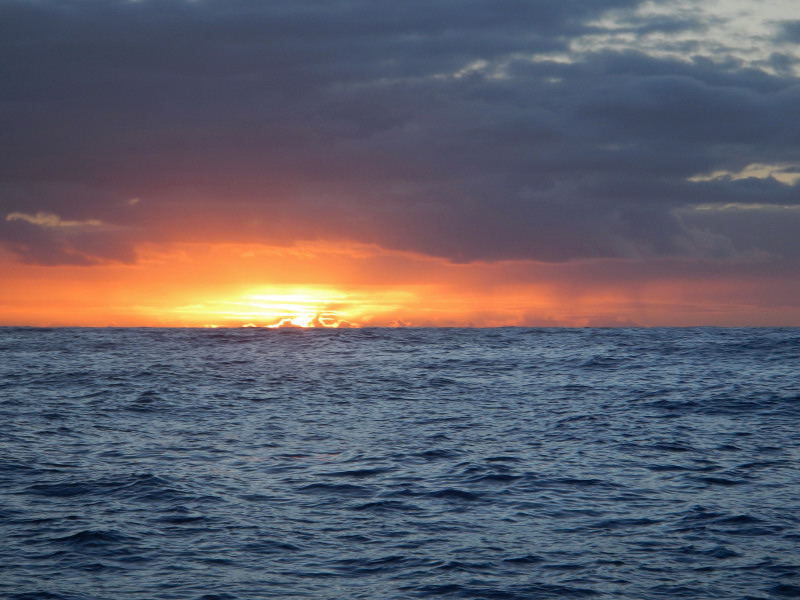 Two days ago the moon was full. With no wind and a flat calm sea it seems like one has been transported into a dreamy haze of surreality. Much like the dream catcher symbols that the Native Americans have and is depicted in some movie introductions.

You see an oily smoothness, the water lazily moving up and down from some far distant disturbance. Then there is a lightness beginning to happen, a lazy brush painting the world a silver coat that envelops your thoughts as well. You sit mesmerized and watch as the scene unfolds before you, the shades of silver and grey cast by the clouds as the moon rises.

Then the world changes to yellow for a while before being bathed in a silver bath when the moon is high enough.

Sailing in these quiet conditions, it is easy to understand the visions of native folk. We have such visions here on board as well. To think that these people are regarded as backward by some so-called civilised westerners. Perhaps they are just more attuned to the world around them and the wonders of nature. I get the idea that they are much more advanced in their psyches than most city folk in the western world. 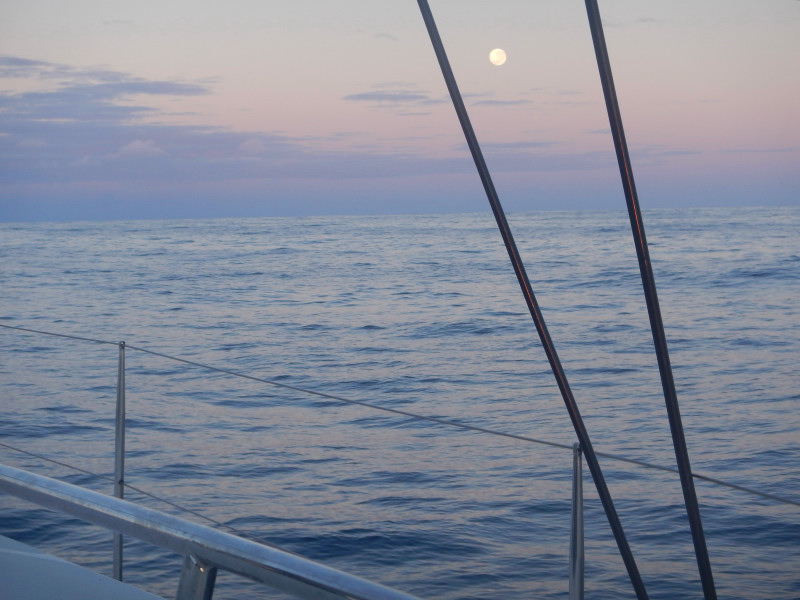 It is an easy transition back to Nature, this voyage through the doldrums. However, not many people will make this voyage, as your progress is not under your control. Weather conditions in this are are shaky, to say the least. Nothing consistent, except the variability. Luckily it is not variable into gale force conditions.


This voyage is also an easy transition into the backwoods areas of your mind. An exploration of your inner being, where there also may be some doldrums, not being visited that often. Much like this area of the globe we are traversing.

A lonely path for all, even if you do have travelling companions.