Epilogue: Tortola after 20 000 Leagues Over The Sea 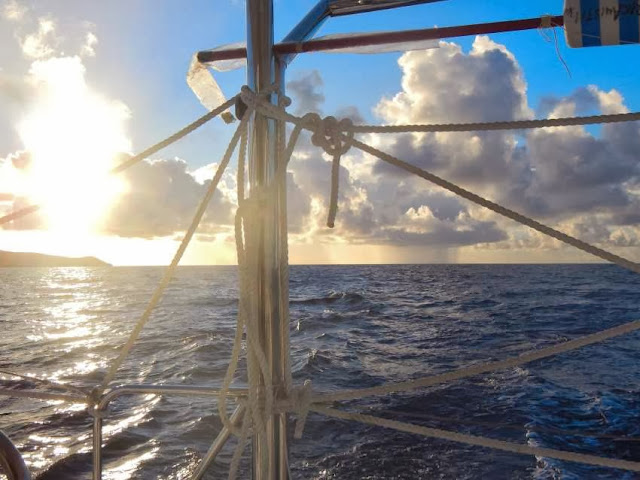 The last part of our voyage included the customary stopover at St Maarten for essential repairs and maintenance before delivering the boat to Tortola. These repairs are very small, basically removing the odd rust spots from the stainless steel parts and buffing the stove back to a pristine, shop floor condition. And servicing engines, of course.

All part of the price to pay for being allowed on a brand new boat to cross the ocean.


The last day at sea did not offer much adventure. We basically motored all the way from St Lucia, as there was hardly any wind. The views of the islands at night, with all the lights shining, the cars moving and aircraft flying made up for the lack of wind, though. It forms an urban backdrop to the voyage, making a gentle psychological transition from a seaward frame of mind to a landward one. 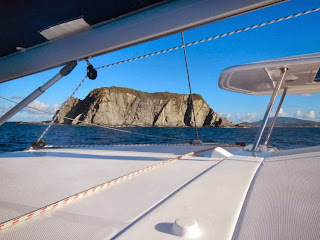 The last transition is when you enter the Sir Francis Drake channel through the Round Rock Passage just south of Virgin Gorda. A beautiful scene early in the morning, flat water and boats sailing all over the place.

For me, this is the last of an era, as I shall not be sailing with my skipper and friend again. Nothing due to a broken friendship, but a career growth path for me. This simply means that I shall be sailing with other skippers before getting my own command, so to speak. There is some hope of a future in the sailing world, as the world's recessions ebb and people spend more of their hard earned money on holidays.

This crossing put my log up to just over 20 000 nautical miles. I used some poetic freedom in the title, misquoting the title of the book by Jules Verne. It just sounds so much more romantic. Actually, a league in terms of a distance unit is not a nautical mile at all. 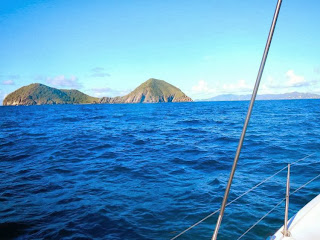 For me, a league means more of a psychological distance. It relates to a rite of passage in one's life, perhaps. Certainly, this last voyage put me into this thing mode. I learned a lot about the sea and ocean voyages, as well as the technical aspects of provisioning, sailing, boat husbandry, if you will, and the mundane parts of sailing.


But more, I learned coping skills. The art of adjusting to the vagaries of life on board a small vessel in a very large ocean. Coping with the various forms of fear that your ego tends to instill in your mind due to a lack of external stimulation. The exact same external stimulation that we get an overdose of, living in cities.

An extended ocean passage provides a golden opportunity for some self examination and review of your inner self. A cleansing of the mind, perhaps. There is also the skills acquired to cope with interpersonal relationships on board. No use in having major disagreements and serious conflict all the time. One learns some leniency.

Well, at least one would hope so. Stories about weird behaviour patterns on board abound. Cabin fever, it is called. Luckily, we managed to avoid this by proper social interaction. It helps with letting off steam.

And the quiet times on watch in the wee hours of the morning helps a lot with personal meditation. I used this frequently when getting upset about something happening during the day. The quiet time allows for some clear and rational thinking. 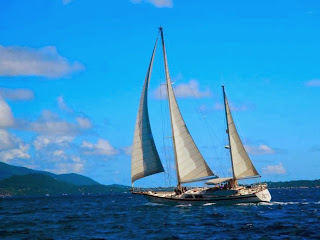 Winter is a very relative concept. I was purchasing some perfume as a present to the missus and asked the sales assistant for a summery, floral fragrance. She remarked that it is all winter at the time. I had some difficulty in understanding this, as the outside temperature at the time was in the middle thirties (°C, middle 90's F). I took a deep breath and explained to her that I was from Cape Town where it was summer and that I was not coming from some way out mental place. In spite of looking like Santa Claus in board shorts after six weeks at sea. I decided that that would take too much explanation.


Although the temptation was there. I had just finished reading the Ultimate Hitchhiker's Guide to the Galaxy by Douglas Adams and was still in that weird and quaint frame of mind projected by the book.

I actually had this vision that the modern smart cell phones are almost the same as the little machine  that carries the name of the book. Very small differences between what I have physically in my  hand versus the description of the machine given in the book. Not scary, but very much enlightening. Mr Adams was not so weird in his thinking after all. 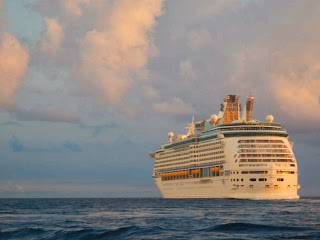 I read a lot on this voyage, as always. This time I made a point of reading some classical books as well. I am about a third of the way through Homer's Odyssey and read The English Patient, a few of Sir Arthur Conan Doyle's best Sherlock Holmes stories and the Kama Sutra by Vatsyayana.

Yes, THAT book. Apart from the technical explanations on various techniques and positions, the book carries on to explain when and with whom one may have sex. Having read this, I then realised that extra marital sex has been going on forever, otherwise the author would not have gone to the trouble of including those chapters. Quite enlightening. I also then read the Odyssey with a different frame of mind, seeing more unfaithfulness unveiled in the famous work by Homer.

The same thing makes up the gist of Kipling's stories about life in India in the heyday of that British colony. Victorian times indeed! My English teacher at school will be proud of me. 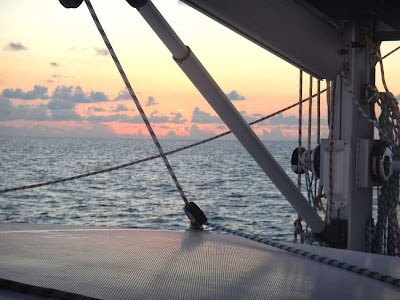 I also crossed some mental hurdles on this voyage and put my baking skills into a higher realm. The bread on this voyage will go down as the best I have baked by far. It just shows what a little extra study and application of the knowledge can do, even in this uncontrollable heat.


Now it is time for a rest and some recuperation before tackling the new year. Time for some consolidation of thoughts and experiences. But not too much planning. Otherwise life will pass by while I am making plans, in the words of the late John Lennon.

Going with the flow is perhaps a good idea. Less taxing on the body and the mind, I venture. And perhaps including more adventures.