Day 18: Some Sun And A Sourdough Starter 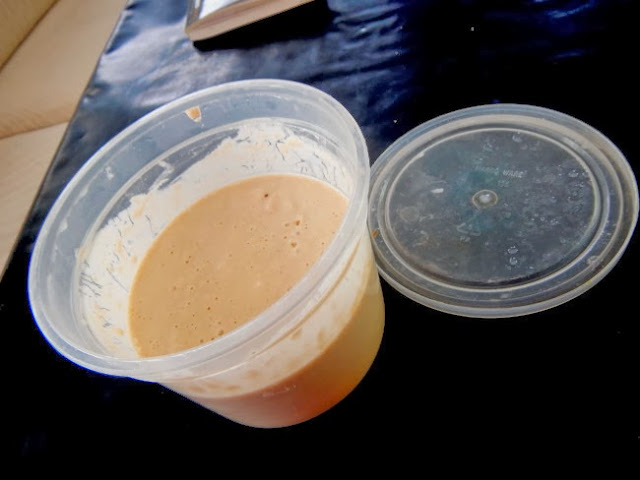 Today the weather cleared for the afternoon and we actually saw some sun. The first welcome heat in a long while. I was beginning to feel like Samuel Coleridge Taylor's Ancient Mariner:

“ The Sun now rose upon the right
Out of the sea came he
Still hid in mist, and on the left
Went down into the sea.”

Quite to the point, I would venture. We are, after all, sailing more or less in a northern direction, if a bit skewed to the west. I never could figure how the peots of old received theeir muse, until I actually crossed an ocean. Combine that with Eckhard Tolle's The Power of Now and you have a life's lesson in understanding your universe.

Andd I mean the psychological one specifically. I have carried on at length about the external influences in normal urban and well developed environment. Today I had yet another clear moment, so to speak, about these influences. The absence of the city's  overload of input data gives one some time to deal with your inner self and your ego.

According to Tolle the ego is the center and origin of all fears. Having to deal with Nature out here allows an elegant transition ninto the acceptance of what is, and dealing with it psychologically. That, is to observe the ego and yet not to yield to the prompts from the ego. In that way one gets some rest, as the ego then subsides and goes to rest.

The cloudy weather is specifically a case in point. There is clearly no way to influence the weather to change. So, you need to change your outlook and just accept it. And live in the Now.

I started a sourdough loaf today. This time around I am following a different approach. The mother sourdough was in the fridge, so I took it out and simply stirred it up and fed it half a cup of the intended flour, with a little water to make it runny. Then I made the starter using half of the flour for the intended loaf. This was left to develop and grow for seven hours. Basically the starter needs to double in volume before the next step. Nice and slow, nothing hurried here.

The next step would be to make up the final mix dough. This will be later tonight. After kneading, the dough will be left in the bottom of the cupboard to rise. I am planning for at least eight hours' worth of rise time, but we need to wait and see. Again going with the flow.

I have had success with this approach in the past. The cool weather actually helps a bit here, since the rise time will be slower, giving more time for flavour to develop through enzyme action. I am also following the general direction given by Peter Reinhart in his book The Bread Baker's Apprentice for the basic sourdough loaf. Except that this one will have some real onion and cheese as well as some wild onion seeds (Koolonj /Nigella Sativa).

The interseting part here is that almost all of the preparation is happening in the middle of the night to coincide with my watchkeeping duties. This is part of the beauty of using a slow fermenting yeast. It takes a long time between stages of development of the dough.And the effort in the active parts is really not that much. 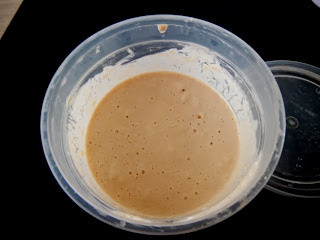 The resulting loaf is quite worth the effort and the planning that goes into the production. But the best part is in the eating. On this trip I actually have to take turns with Bianca, our lady crew member, to have the first end crust bit of the loaf. Luckil;y the rest of the crew are not partial to that specific piece. To me, the first crusty slice is the best part of the bread. And the crust must be crisp and chewy. Lately my efforts seem to bear fruit in that the crust comes out a beautiful brown colour and is quite crisp.

Our fishing efforts took a turn for the better today. Perhaps in a roundabout way, I should add. Just as the sun came out. All three of the fishermen lost a lure to violent takes, to the great mirth of the fourth crew member.

Yet another lesson in just going with the flow and gracefully accepting laughter from a female spectator.