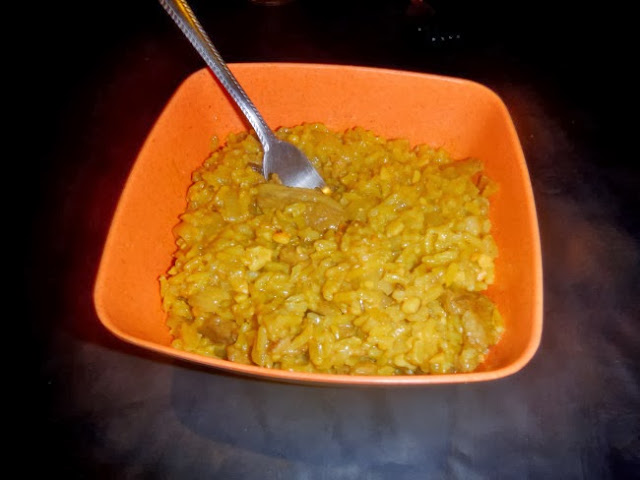 And beef. The risotto had beef strips too. But more of that later. 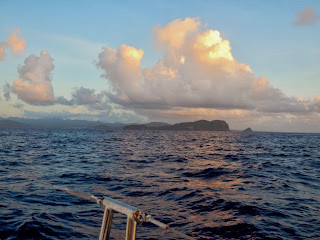 Today we made our landfall after crossing the Atlantic. We passed Barbados at a distance of about eighteen miles on our way into the Caribbean Sea. We are now officially out of the Atlantic ocean.
I took the last sun sights of the voyage, as we shall be within sight of land for the remainder of the voyage.


I am rather pleased with my progress in the field of celestial navigation after closing off the navigation across the Atlantic with a difference to the GPS of twelve nautical miles. This due to a counter current during the last forty-eight hours that I did not estimate sufficiently accurate. Still accurate enough, though.

My plot put us twelve miles closer to the island than the GPS, which translates to an hour or two additional sailing. At night the difference would be negligible, as the lights on the island and the aircraft movements would give the direction. 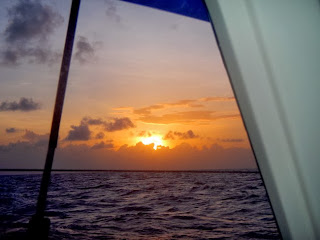 Our freezer is almost empty. Soon we shall switch off the freezer altogether as part of the close  down and clean-up before handover.

Today is my last turn at cooking. It is also the last 16h00-18h00 watch of the voyage for me. Lots of lasts coming through now.

I planned to make a beef korma and reserved the ingredients accordingly. However, I received a request for a last risotto. I inclined to acquiesce, if I may misquote the pirate from the film Pirates of the Caribbean.

So I had to come up with a risotto using similar ingredients. Beef strips in an onion and cashew risotto, flavoured with mild spices and coconut milk. 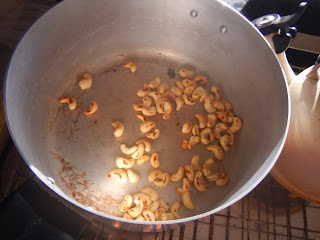 This was a bit of a culinary excursion, perhaps even an adventure, to me. The vagaries of designing end of voyage dishes!

The beef cubes were cut into small strips, then fried in cumin and coriander before being put aside to repose.

We do not have arborio rice on board, so it was brown rice. Somewhat out of the ordinary, even for me, I would venture.

The cashews were roasted in a dry pan, then crushed into crumbs. This got mixed with finely and coarsely (mixed), chopped onions, fried in butter. Add the raw rice, fry a little and you are well on your way to a decent risotto a la The Hungry Sailor. 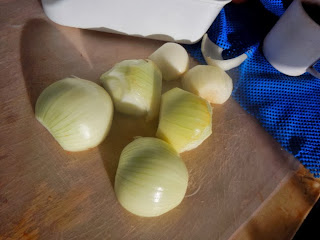 Roast the cashews in a dry pan until they go dark. Allow to cool, then crush them in a coffee mug using the back end of a spatula or wooden spoon. That's what we have on board instead of a mortar and pestle, or, even better still, a blender.

Roast the beef strips in a dollop of butter to flavout the pan. Remove from the pan and keep aside once they go brown. Now add the onions and fry them until they go brown, not just translucent. They need to caramelise. Add the cashews, the cumin, coriander and the rice. Stir fry this until the rice goes brown. Add some butter if the pan goes dry.

Now add the white wine and keep stirring until it has been absorbed. Add the soaked mushrooms with the soaking water and keep on stirring, making sure that everything comes off the bottom of the pan. Add some water to make the dish mushy and keep on stirring. 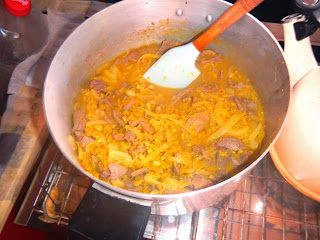 Add the coconut cream towards the end, it will thicken the dish and add some flavour. Add salt to taste. Add the garumm masala towards the end. It serves as garnish.

This dish needs to be mushy, so don't overdo the water. You don't wantto end up with a crunchy soup.

As always, allow the dish to repose. This one will take much longer than anticipated, as it is quite thick and therefore will retain enough heat to make it not immediately edible. Have some wine on the side while you wait for everything to cool down before dishing up. 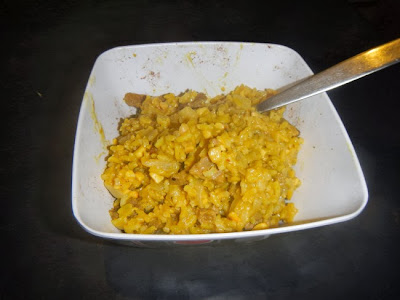 This dish had all the flavours of the korma, but without the bite.The mushrooms and cocnut milk took it away from the realm of curries and more towards an avant garde risotto.  It came out good enough to warrant a trial at home.