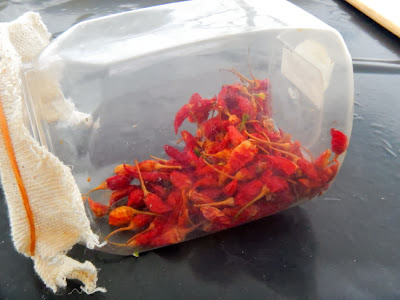 We slipped moorings and left St Helena on Tuesday around noon after a wonderfully relaxing visit. It is now actually Thursday as I sit here writing this blog post. I am on watch on the witching hour shift from 00h00 to 03h00.


The sea is quite calm with hardly any wind and we are motoring along at a pedestrian pace to conserve our diesel. We still have over 4300 miles to go.

This trip will probably go down in my blog writings as the grey passage. Up to now we have had about ten days of cloudy weather.

We only had three or four days of the famous trade winds during which we made good progress. The rest was filled with motoring along. Rather like marine motorists.


Enough lamentations. We had a lot of fun on the island. Our crew went up and down Jacob's Ladder, the famous steep 699 steps up the hill in Jamestown. And I had my standard raid on the chilli bushes in the Consulate Hotel's garden. 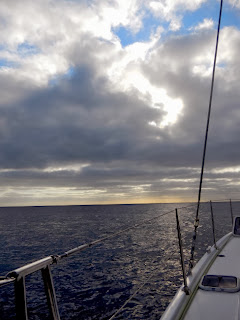 They have the most flavourful chillies growing on six or so bushes in a quite sheltered garden in the back of the hotel. These are probably Tabasco chillies or a variant. The fruit are elongated and about 15-30 mm long (1/2” - 1 1/4” for my American readers). They are quite hot, perhaps a tad hotter than Thai chillies, but a lot less that Habaneros. Exquisite flavour. These bushes are all standing about 1,2m tall and about a meter wide. (4' by 3')


These bushes get reasonable sun and hardly any wind, so they flourish. They carry fruit in copious quantities, with some bushes having red fruit and others having orange fruit. And nobody harvests any of the fruit.


Well, except me, it appears. On previous visits, I was able to harvest some fresh fruit, but we were too late in the season for that. This time around I harvested semi-dried fruit straight from the bush. Two double hands full.

Of course, the skipper refers to this as poaching. Apparently what I am doing is quite illegal. However, by the time we get to St Helena, my beard has grown past the ugly stage and, being white grey, I look like a younger edition of father Christmas and quite harmless. I hope that this appearance will stand me in good stead if the hotel's proprietor tries to nab me. If this fails, I might just end up on the St Helena radio news bulletin as being a thief of foreign origin! 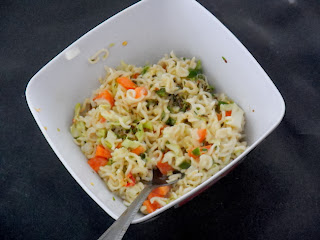 Today, I used one of these chillies in my noodles for lunch. The noodles come with a vegetable flavour of probably chemical origin, which I enhance with some fresh stuff. Today it was alfalfa sprouts, some cabbage, a small piece of carrot, a whole jalapeno chilli, a slice of onion and one of these St Helena chillies. All chopped and mixed in, with a dollop of mayonnaise to lubricate the lot. Voila, a crunchy and sensual lunch. Rounded off with a cup of tea on the aft deck.


I made my normal observations of the sun today. Through the clouds and all, Luckily the clouds seem to be thinning a bit. With the flat sea I had a wonderful stable platform and a well defined horizon. 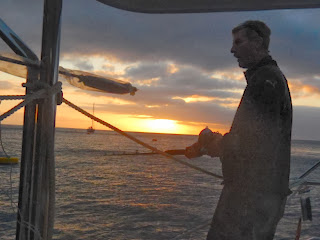 
Needless to say, my fix came out about six nautical miles away from the ship's GPS position at the time. Very close. However, one needs to understand that the two sets of co-ordinates will differ as they are measured on different geoids. My measurements are in standard spherical co-ordinates, while the GPS shows co-ordinates in the WGS84 geoid, which is different. I shall research this difference when I get back home again. 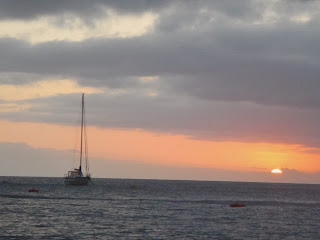 We also caught the first fish of the trip today. The score is one landed and released, one lost, complete with lure when the knot gave. We released the small bonito, as it is not really good eating. Even in a curry the gamey flavour is there. Hopefully we shall have good catches soon. Our friends are about two hundred miles ahead of us. They hooked a monster fish on a hand line and the crew got line burns as a result.

A portent of things to come, I hope. I am looking forward to a sensual Thai style fish curry.