At last the wind came. We still have a cloudy sky, but now we have about 13 knots of wind over the quarter, meaning we are sailing.

A peaceful and quiet Sunday afternoon. I am alone on watch, Everyone else is taking a lie-in, leaving me with some me-time. Normally we would have a game of rummy or the Monopoly Deal card game going, but today seems to be unanimously declared a rest day.

I was able to get some decent sun sights this morning just before noon. These reduced to a fix which was about 10 miles away from the GPS at the time. Persistence pays after all, I guess. The trick is not to let the inaccuracies get into your ego. Eckhart Tolle in the Power of Now has a point after all. Don't get dejected.

I also baked the first sourdough loaf of the voyage. The starter was described in my previous blog post. The final dough was mixed and kneaded last night at around 23h00 and left to rise overnight.

This morning I checked the status and found that the dough had risen to about double the volume, but was sagging too much to my preference. So I added half a cup of flour and folded this into the dough. The dough was too soft to knead, so I just folded it many times. The soft dough makes a very nice loaf, but, being almost runny, I am dearly missing a proofing basket on board. A proofing basket of sorts or a baking tin would help to keep the shape. 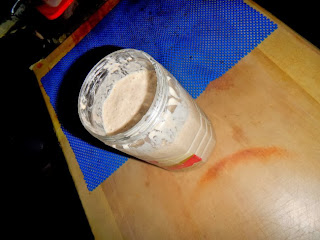 The new mix was left to rise for another two hours after shaping before I popped it into the oven preheated to 210ºC . The loaf was baked for forty minutes, being turned around 180 degrees after twenty minutes. The oven on the boat is quite small and the loaf on the large side, so it tends to bake more on the one side.


This loaf was made with some wild onion seeds, some real onion, grated, and some grated cheese. The onion is grated, rather than chopped in order to get it fine enough. 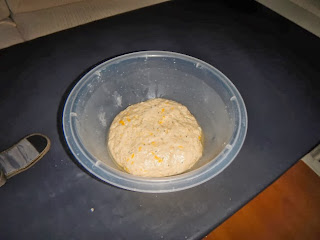 Take care with the amount of water. The onion is quite juicy and will add more water than you may think, making the dough too soft. I had to add some flour after the first rise to get the dough stable enough to shape. You add the onion at the main mix and the cheese just before shaping, Otherwise the cheese gets broken into vey fine bits and you lose the texture.

The vegetable fat I use goes by the brand name Holsum in South Africa. I believe that one can also use the stuff that is sold as original margarine. 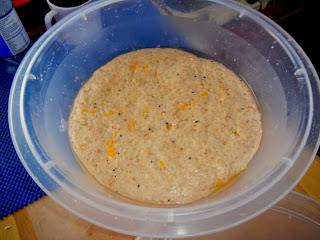 The other part of the story here is that this method will get the yeast part of the sourdough growing fast and furious, while the slower acting lactobaccilli will be left behind. This has the effect of making the end result less sour.

I have had the occasion where the loaf came out quite sour. While this is good on the odd occasion, not everyone likes a very sour bread.

This loaf and flavours by request from the skipper on the grounds of having had such a loaf on a previous trip. I feel honoured, I have a fan!

Mix the lot and leave to ferment for six hours. The starter will increase in volume, but not necessarily double. The critical point here is to ensure that the mix is thoroughly fermenting. Mine had large bubbles. 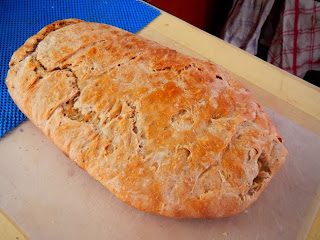 Mix the dry ingredients thoroughly. Rub in the vegetable fat and then the grated onion. Add the starter to this and mix thoroughly. Add a little water at a time so that you end up with a soft dough that you can almost knead. Fold the dough and press down, then fold again, keep on doing this until the dough is elastic and satiny.

Now flatten the dough, sprinkle some of the grated cheese on one third, then fold the dough to cover the cheese. Continue with this until you have folded all the cheese into the dough. Pat the dough with some cooking oil to prevent drying out, then store it in a cool place to rise. Here you need to have at least double the volume before proceeding to shaping and baking. 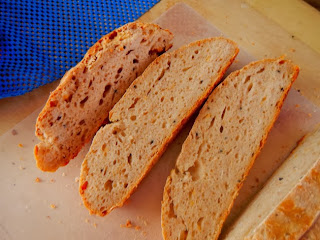 After the dough has risen, shape it into the required shape. Take care not to degas the dough, else you will end up with a flat, hard loaf. Allow two hours of proofing time before baking this loaf in an oven preheated to 230ºC. I checked the loaf after twenty minutes and turned it to allow even baking on all sides. Then I allowed another twenty minutes of baking before switching the oven off.


The loaf was left in the closed oven to develop flavour and to cool slowly. After another ten minutes I turned the loaf out on a cooling rack for final cooling. Leave the loaf to cool for at least 30 minutes, preferably longer. During this time the steam evaporates and the elasticity comes to the crumb.

Remember to use real butter.