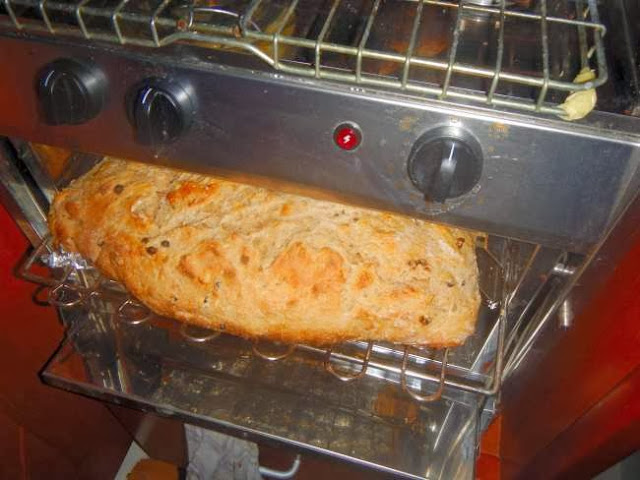 Today is the last day of the long legs of our voyage. We are sailing past the island of Montserrat in the Caribbean at the time of writing this.

In weather that is very hot and humid, the only respite from the heat being the breeze caused by our moving through the air. There is literally no wind to speak of. Not even the famous zephyrs that the Vaal dam sailors in inland South Africa know so well. 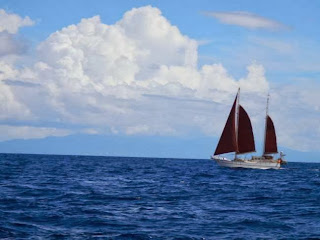 My last watch will be tonight from 00h00 to 03h00. During this time my last baking efforts for this voyage will come into fruition when the loaves are baked. This will be the last use of the oven before decommissioning prior to handover. The refrigerator is almost empty, ditto for the freezer.
Slowly but surely we are packing away all loose personal items and getting everything in order to clean up and hand over the boat.

This period in the voyage always comes with some nostalgia. You are now handing over your child, which you so very carefully looked after and nursed through sickness and health, to some foreigner.
Enough of nostalgia. Hungry sailors also need to eat. So we turn again to the age old staple:

This time around I decided on a similar dough than the challah I made earlier on the voyage. As this is the last baking of the voyage and we still have a night sail to Tortola, I decided to make two loaves. Hopefully they will last long enough! 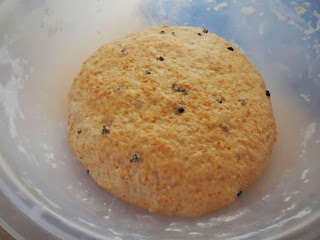 The dough is again quite soft. I started with the last of my sourdough, ditching about half of it as the gluten in the flour was already consumed. Half a cup of white bread flour was fed to this, along with enough water to make it just runny.

After leaving this starter to ferment for six hours, I mixed in the rest of the ingredients, barring two cups of flour and the currants. This quite soft, almost runny dough was left for another seven hours to ferment before the next mixing and kneading.

The last ferment was left for five odd hours before final shaping and proofing. Final proof was four hours. 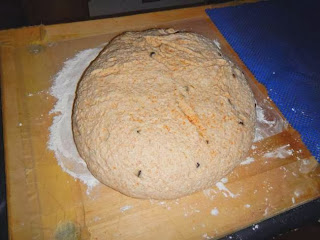 Shaping was done by making four long snakes and twisting them in pairs, as opposed to the three stranded braid of a challah. The loaves were cut on top to facilitate even oven spring, and basted with some whisked egg white.


These were baked at 230ºC/450ºF for twenty minutes. The oven was turned down to 190ºC/375ºF after twenty minutes and the loaves turned back to front to facilitate even baking in the small oven. 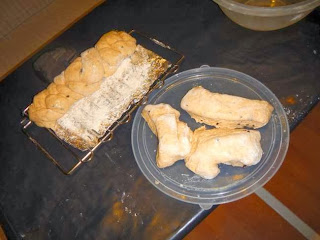 For the main ferment

Mix all the above thoroughly. The consistency should be almost runny, too runny to knead. Cover and allow to ferment until double in volume. This took some seven hour in my case. 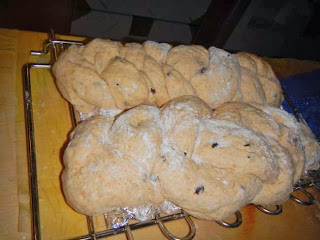 For the last ferment

Mix all of the above thoroughly. The dough should now be still soft, but foldable if not kneadable. Fold for ten to fifteen minutes until the dough is satiny and quite elastic. It should not be sticky any more.

Pat with some cooking oil against drying out, cover and put aside to ferment until double in volume.
Take the dough out, turn out onto a floured kneading board to rest for fifteen minutes, then divide into two loaves and do final shaping. Try not to degas the dough. I opted for a twisted format, so there was quite a bit of handling of the dough.

Allow the shaped loaves to ferment at least another hour before baking. They should be at least 1½ time their original volume.

Baste with beaten egg white, slice the tops to facilitate even oven spring, then pop them into the oven. Bake for twenty minutes at 230ºC/450ºF, then turn the oven down to 190ºC/375ºF. Turn the loaves back to front to facilitate even baking and bake them for at least another twenty minutes. Check for through baking. The loaves should make a hollow sound and should be reasonably crisp on the outside.

Remove the loaves from the oven and turn out onto a cooling rack. Allow at least forty minutes for these to cool before slicing them. Don't worry, they will still be warm! 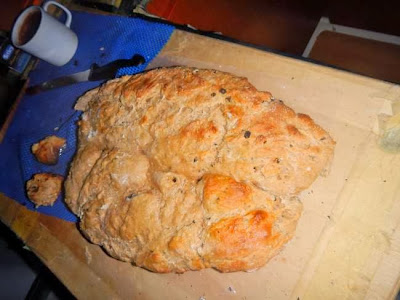 Well, as you may have noticed, I wrote most of this before the loaves went into the oven. This is where the twister became a real twister. The dough rose beyond comprehension and I had to do the shaping much sooner than anticipated. The dough was quite soft still, too soft, in fact.

But I did not heed any warning.

So it appears that the dough has morphed into something alien. Or is the proper word “mutated”? Whatever the case, the dough dripped through the oven grid between popping the loaves into the oven and the end of oven spring. Much like something escaping from one of the lesser known planets in Douglas Adams' Hitchhiker's Guide to the Galaxy.

Perhaps I should write Peter Reinhart about this alien effect. Or perhaps just send him a link to this blog post...

The two loaves became one in the oven, restricting the air flow and thus the proper baking. The shapes of  the loaves were completely lost, but the taste remained.

There is a lesson in here somewhere, I think.

But then I got hungry.

And remember, use real butter.