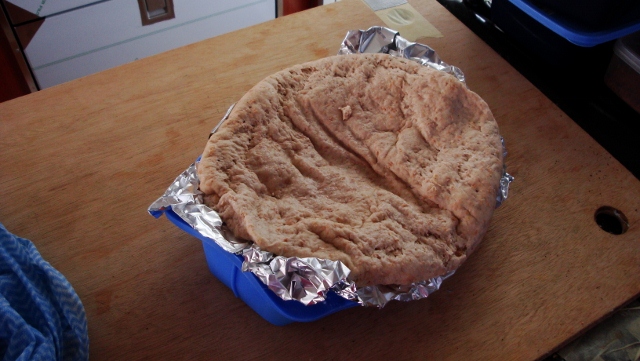 Interesting day that we had today. Cloudy and mostly overcast, but no rain. The wind behind us at around fifteen to twenty knots, pushing us gently along. The weather stays cool at just over twenty degrees Celsius (around 68ºF), but it is discernibly warmer than a week ago and we are wearing rain jackets and wind breakers only when outside for extended periods.

No fish was caught today, probably because of the cool and overcast weather. We are still praying for the wind to stay. We sailed without motoring now for over 48 hours and only had to run the engines to charge the boat's batteries. A blessing, no less.

We had toast, boiled eggs and a Vienna sausage each for lunch. It appears that lunch is getting slightly more formal than on my first Atlantic crossing, where each had his own slap-up lunch in his own time. Having lunch together adds something to the camaraderie on board. It also says something about the level of physical activity on board. We are sleeping less than on the previous voyage due to the mild weather and therefore less exertion when on watch. The result is that Renier, the skipper, and I, are reading voraciously while Dawid, strictly a poor reader according to himself, has taken to reading avidly. Interesting how circumstances changes one's habits.

Incidentally, Dawid gave up smoking and is using this voyage as a form of cold turkey to kick the habit. He came up from his cabin after his siesta this afternoon, remarking that only now did he realize that he had been an occasional smoker for basically all his life. On further enquiry on this remark he expanded by saying that he had had no withdrawal symptoms during the voyage thus far, a period of eight days. According to him that means that he has no chemical addiction or dependence on the nicotine, ergo, occasional smoker and just a mental habit. It seems that siestas on board do go a long way towards discovering inner peace and knowledge of one's inner self after all.

Much to say for a slow voyage, forsooth!

We have more air time on our satellite phone than on the previous voyage, thus we have more contact with the outside world. All three of us are either married or in a long term relationship and news from home is welcomed by everyone. And the form of the news is interesting. Each one of our loved ones has her own special turn of phrase when compiling a message. So, when the new message prompt comes through, showing the first few words of the message, one can decode who the message came from. For example, all messages coming from Carol start with the words: “Hi Old Sweetie, ...” One can even tell the mood of the sender by any variation in the salutation or ending of the message. We decided that there is a significant difference between one, two or three X's at the end of a message. There is some light hearted side-betting going on about the predicted number of Xs in the ending. A source of great mirth and friendly jests.

I started my next loaf yesterday by adding half a cup of sourdough to half a cup of white bread flour. This was mixed with a little lukewarm water and left to activate overnight. I was expecting a bubbly froth, but no avail. The leftover sourdough was fed with some white bread flour and at least that was bubbling away after about three to four hours, a good sign. I consulted my book of words (Classic Sourdoughs, Revised: A Home Baker's Handbook by Ed Wood and the Estate of Jean Wood), which pointed out that I need to more patient, my dough was doing OK. I let the proof ferment overnight, then added to that half a cup of rye flour, one cup of whole wheat flour, one cup of white bread flour and some salt. This was thoroughly mixed, adding water a little by little, until a stiff dough was obtained. I kneaded this for thirty minutes, adding another half cup of flour in the process through flouring the kneading board.

This dough was declared complete and put in a lukewarm oven to rise. I left this to rise for five hours. This time the dough rose properly, but sagged a bit on removal from the container. I added in some rye flour, of which I have much in supply. This I did by kneading and folding the dough on a well-floured board. This went back inn the now cold oven to rest at 20ºC /68ºF until tomorrow, when the baking shall proceed. This time I have high hopes.

However, after supper, when I checked on progress, I found that the dough had not gone to rest, but is happily rising some more. In fact, it was climbing out of the container. I decided to pull rank on this lot and put the dough in the fridge. I shall let it out and thaw some before baking the loaf. The way it rose tells me this lot will make two medium sized loaves. It appears that I have a very lively yeast after all, but need to exercise some of my own patience a bit more.