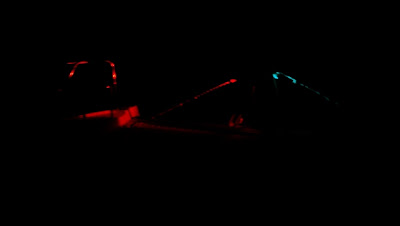 Tonight I am on early night duty. This means the 21h00 to 00h00 shift, the three hours up to midnight. Actually not too bad for one's personal routine. Dinner around six, then some socialising after dinner, while washing up, then playing cards. After that a forty winks catnap, then the stint on watch. Then you get to sleep during the bulk of the night, waking up in time to watch the sun rise over the horizon.

All the other slots mean that you either work two slots in the night, or that you sleep in two stints in the night. We argued the pros and cons of the various watch duty slots, as this is the one area where everybody have the same experience after a week and can thus argue with some authority. Unlike most arguments and debates of this nature.

I contend that really doesn't matter physically. It is one of those psychological things in life. Your experience of the watch duty is largely influenced by your perspective, or world view, if you will, on whether it is good or bad to be awake in the wee hours of the night. In this instance the world view is probably dominated by the idea that one needs to sleep the prescribed eight hours per night, going to bed by nine in the evening. Or something similar.

Life on board differs from this in that one has to adopt a three hour on, six hour off routine. And in the psychological sense as well.

In our case, the three of us have adapted very well and life is a pleasure on board. However, I get the impression that this is the part of a long voyage that gets to people and what determines whether this life afloat suits them or not. The other major part being away and out of sight of the land. Apparently some people have a phobia related to openness, rather like the opposite of claustrophobia. And don't forget being cut off from your favourite media,but that one should not count as yo need to understand this succinctly before embarking on a voyage. Something to plan for.

We are now just a day or so away from St Helena island and one can feel the excitement building. This leg of the voyage took a bit longer than expected due to a lack of wind. Even Renier, a veteran of many deliveries, got jittery with the slow progress. Hopefully we shall have more wind on the next leg of our voyage.

As for the standard lunch of two minute noodles, I am happy to report that we made a major breakthrough and that this stuff needn't taste like packaging material any more. The recipe is really simple, add some mayonnaise, then some tuna and sprouts and voila! you have proper food. I have reported some of this in an earlier blog and now am confirming my findings.

The sprouts are easy to grow, another delightful discovery on this voyage. Use a wide mouthed see-through jar with a breathable lid. We used plastic canning flasks, replaced the lid with some mutton cloth stretched over the mouth and kept there by an elastic band.

The process is easy. Take a spoonful of seed of your choice and soak them overnight in the jar in lukewarm water. Drain the water from the jar and leave the jar on it's side in a warm place. Rinse the seeds once or twice every day, thereby keeping them moist. Rather like watering the garden. The sprouts should be ready to eat after three days. Or when your appetite gets the better of you. There is quite a variety of seeds suitable for growing like this, it is light to pack, easy to grow and makes a nourishing addition to any meal. Not to mention that you basically then have fresh veggies every day. Very economical at home too, it is much cheaper than buying the grown sprouts from your greengrocer.