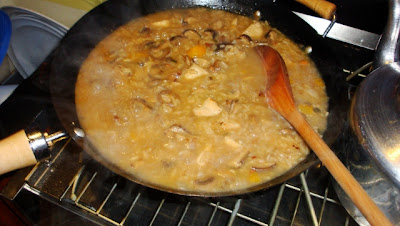 We found the wind at last. Or rather, the wind found us. The wind picked up yesterday around midday and have not subsided. In fact, it freshened and we are sailing merrily along at just on six knots. The weather is mostly overcast and cloudy, with a high pressure. Exactly what we want. The wind is subsiding a bit towards late afternoon, but picks up again in the morning.

In the field of navigation we are seeing exactly what leeway entails. The boat is drifting away from the wind at right angles to our set course. This is visible on the sight reduction plotting sheets and can also be derived from the GPS display of the boat. The leeway would have put us several tens of nautical miles north of St Helena Island. Which means downwind of the island, a most uneconomical and uncomfortable position to be in. It will cost lots of diesel to get back upwind to the island, never mind the splashing into the swell. We adjusted course and now have some 'money in the bag,' in a manner of speaking. Sailing theory applied. Some of the yachtmaster course material did stay stuck after all.

My potato crisp wrapper lures continue to be a source of merriment, but they work extremely well. To date we have caught no less than five snoek on those. Problem is that the lure only lasts for one snoek, due to the snoek's razor teeth. A huge success, no less.

Our after dinner card league is now getting into full swing. We play a game called Uno. Quite hilarious, the emotions and expressions that come out during the game. Renier keeps score and it becomes a wailing wall, so to speak.

The Super 15 rugby scores of the weekend came through by text. Another source of light hearted rivalry. Some favourite teams lost badly, but South Africa will have a team in the finals.

There is a definite lifting of the spirits on board ever since the wind came up. Both the skipper and me were getting jittery about the diesel consumption and our jittery-ness was beginning to leave a trail of bad vibes on board. Now, after sailing non-stop for more than 36 hours at an average of just under six knots, the vibes on board are much more positive and a happy mood has descended on our little boat. 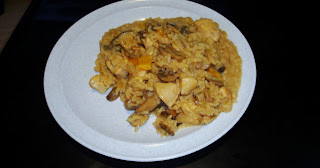 Today was my turn at galley duty. Dinner was a risotto with chicken and mushrooms, a simple dish made in one saucepan. In our case the saucepan is the wok. Our cooking utensils consist of a wok, a small pot and a medium size pot. Whatever food we cook is made in one or more of these. These go with a small two burner stove, where the medium size pot and the wok do not fit together on top. It makes you think twice before starting a dish.

This risotto was made with normal parboiled long grain rice. Not the best choice, but this is what we have on board. Renier, our skipper, had three helpings. Dawid, the crew, had two helpings, while I had one. Renier scraped out the wok. Tough on the one who had ideas of a late night snack on leftovers while on watch. But a compliment to the cook, with requests for another one later on.

It pays to do some experiments before a trip.

Salt and pepper as required.


Rehydrate the shitake mushrooms in 1 cup of hot water, then chop them reasonably fine. Use the water that they soaked in to make the stock. Fry the chicken in the oil until brown, then remove it from the saucepan.

Now fry the onions and sweet peppers in the oil and juices left by the chicken. When the onions become glassy, add the hot chili and the garlic and fry for another minute or two. Add the uncooked rice and fry it in the onion mix. Keep on stirring the mixture to ensure that it doesn't stick to the bottom of the pan. Add all the white wine and keep on stirring, making sure the rice absorbs the juices. After the wine has been absorbed, add the chicken or vegetable stock and continue to stir. Add more water as required, keeping the dish mushy. Test the rice frequently to check that it does not overcook. When the rice get to an al dente stage, add back the chicken and all the mushrooms. Keep on stirring to make sure the dish doesn't burn, else you will start from scratch. At the end, add half a cup of fresh cream and garnish with spring onions and some grated parmesan cheese. Turn off the heat, add salt and pepper to taste, rest the dish for ten minutes, then dish up.