Day 12: The Battle Against Routine 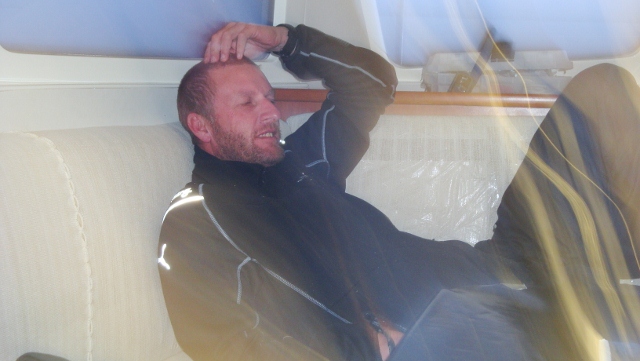 The umpteenth day dawning under grey skies, the sea a leaden colour. Magnificent light for a photographer, hardly any shadows around. The wind is moderate, making little foam patches here and there, showing the Atlantic in a steely shade, reflecting a brooding mood. The weather looking a bit like rain, except it doesn't. The temperature still on the cool side in the mornings and whenever the wind freshens. At night the scene changes from gray to silver. The moon is now waxing towards half a moon, shining directly overhead. Between the moon and the clouds the sea is painted in the most romantic soft shades of silver. Another boon to the avid photographer, except the boat is moving and photography is out unless one has very specialised equipment.

At home you would curl up with a book and a full bodied red wine by the hearth, having a friendly fire with orange tongues licking at the logs, painting curly shapes against the wall. Out here it is but a dream. Of which we have an abundance. Especially during the night watches. I am reliving some of my childhood adventures and dreams and experiences. Ditto for my shipmates. Renier and Dawid have been friends for long years, since their school days. I gather from their conversations that they are both having flashbacks from the days of tore. They are discussing people that both have last seen in primary school or thereabouts. From an outsider's point, I would venture that some senility has set in, perchance. But I have the same affliction, and, despite my age, I think it is from mental boredom.

Such is the effect on the lack of external stimulus in the world that the three of us are traversing at present. It is very much a psychological journey through one's mind on top of the sea voyage. I thought that I had this down pat after my first Atlantic crossing, having fought all the remaining ghosts lurking in the far corners of my mind. But I was mistaken. There is much in the back rooms of the mind that comes out in the times of quiet, when there is only a little routine work to be done and then brain is mostly idle. During the previous voyage I only had a few days of this, but this time the weather is so calm that one is less mentally active with sailing and managing the boat. Therefore the brain seeks its own stimulus. The brain wants to be active. It is not good to change one's lifestyle by the throw of a switch without proper planning, so to speak. An extended voyage, however, does exactly this. Also to prepare for the psychological journey in addition to the physical journey. This is why it is good to stop over at St Helena island for a break in the routine. 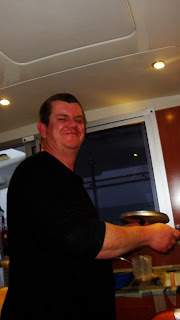 One does one's best to cope with the mental inactivity by reading, in my case doing navigation, or taking language lessons. We have a Spanish language course on board, so we started to have a lesson around lunch time every day. Just ten minutes or so. Keeping the brain occupied with something useful, as opposed to tilting at the windmills of the mind like Don Quiote of old. So far it has worked, using the peer pressure to keep the discipline alive. But I think the calm weather may just wear our resolution down.

On the other hand, the words of the wellknown song by Vicky Leandros come to mind:

Dreams are good friends when you're lonely...

They won't leave you or deceive you

and will help you carry on...

Luckily we are just 320 nautical miles away from St Helena island. We should reach it by Monday late morning. That would provide some variation in the day and allow us to break the strict routine of managing the boat under way.

We shall be buying some necessary provisions that got left behind due to our hasty departure from Cape Town between two cold fronts. And take a tour of the Anglo Boer war cemetery as well as Napoleon's last home. Just by way of doing something else, the last chance of doing so for the next thirty days.