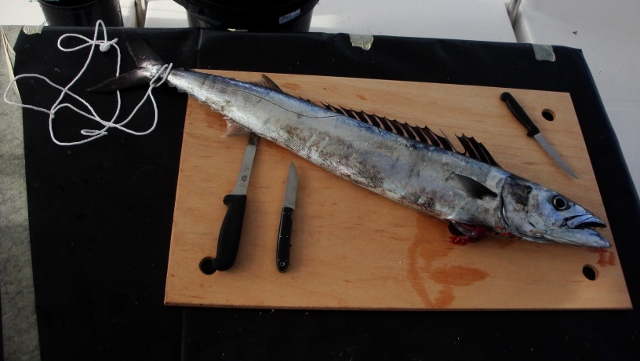 The day dawned breathless yet again. But what a sight! Pastel blue and pink skies in the west, with a hint of stripey clouds, somewhat hazy. A balm to the soul.


We motored the whole day in basically windless conditions. A lazy zephyr every now and then. Navigation instructions for getting to St Helena island from Cape Town appears to be: sail north along the west coast of Africa till you get to the town of Luderitz, then turn a bit left if there is wind. Else, go further north till you find wind, then turn left. If you bump into Africa far north, you have gone too far. 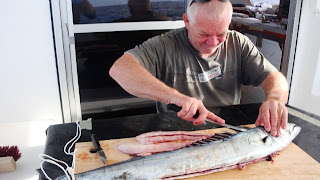 I know this is not accurate, but it gives an idea of the navigation decisions to be made. And it is relatively easy to explain to those not deeply involved in navigation.


Today was the day of baking bread. The first experiment with the gas oven proved to be a bit beyond me. I removed the grid in favour of putting the baking tin directly on the plate. This gave me some more height in the small oven for the bread to rise. Wrong idea. The silicone baking tin did not like the heat from below and burned. Luckily the bread wasn't spoilt. In fact, it was consumed at such a pace that I hardly had time to take a photograph before it was finished.! 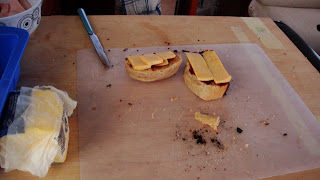 The bread, however, did not rise as expected. This could be due to several reasons, which I then researched thoroughly. (I actually brought an e-book or two along!) It has something to do with the sponge that I made with rye flour instead of white bread flour, as well as the sourdough not being sufficiently activated. I just hope and pray that my sourdough did not get infected by another yeast which killed it off. After some deliberation, I washed the sourdough and fed it half a cup of white bread flour. The ambient temperature is on the low side, with no specific warm areas in the boat, so there is another source of worry. Only time will tell. Thus far the washing and feeding part seems to have worked. The sourdough is merrily bubbling away, smelling a bit like pineapple beer. I shall put it in the fridge later on. The next loaf will have less rye and the sponge starter will be made with wheat flour. 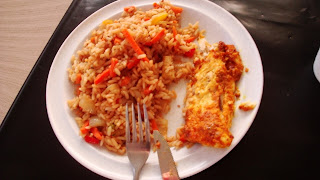 We also caught our first fish today. A snoek, no less. Queen mackerel for those from other parts of the world. I was a wee bit worried about how to prepare the fish, as it has a somewhat oily flesh. At home the fish would normally be prepared by having it smoked, barbequed or poached. Only the poaching is open to me here on board, in addition to frying in oil, something perhaps to be avoided. I was somewhat undecided, worrying about this oiliness. In the end I made up my own variation of cajun style spices. I rolled the fish in that before frying in the pan. This was dished up with vegetable fried rice, complete with the first fruits of the sprout growing experiment. The fish came out very tender, still juicy and very flavourful. Snoek is a very bony fish, but luckily the bones are big and easily removed. It is a wonderful experience to eat freshly caught fish. It just has something different to it.

I did not bother with salt on these. Mix all the dry ingredients in a small bowl. Roll the fish fillets in the dry mix, then fry them in a lightly oiled pan.

Some of the stuff below. The choices are endless:

Alfalfa sprouts. This was our own product, freshly harvested 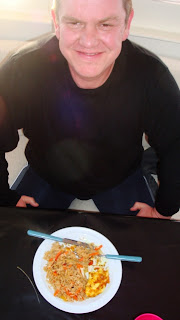 Fresh mushrooms. These can be chopped or left whole if they are small. I forgot to add these.


Easy and simple. Stir fry the vegetables in a lightly oiled pan, add a dash of pepper to bring out the flavour, then add the cooked rice and mix. Add a dash of soy sauce and voila, you have a quick dinner.

If you want to be fancy, fry some fresh ginger and garlic with some white pepper in the oil before adding the vegetables. This will bring out the flavours even more and add some zing to the dish.