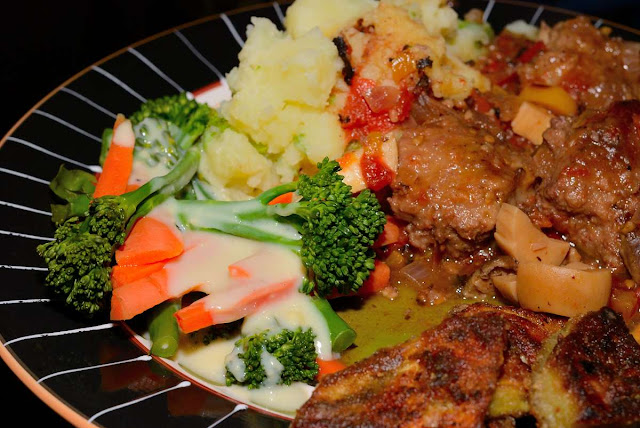 Actually, these ones are a bit different. There is a twist. I perused an old cookbook of mine, published in 1981 by the Section Home Economy under the Department of Education of those days. Yes, a government department that published a cookbook, nogal. Found a nice recipe for traditional frikkadelle (meat balls), made with a Russian sauce.

This one made a welcome change to our normal home-made meatballs. The sauce was especially good. This dish goes well with rice or mashed potatoes and one or two vegetables for a traditional South African lunch or dinner. I made a my own Hollandaise sauce to go with the veggies.

The frikkadelle is pretty standard traditional stuff, using some coriander, salt, pepper, half a teaspoon ground nutmeg and five cloves for seasoning. A little oatmeal provides the sponginess for absorbing the sauce, instead of the standard slice of bread.  There is no egg in this recipe, only some vinegar. I added some freshly mashed garlic as well.

Mix 250 grams of meat with ½ cup of oatmeal, along with all the other ingredients, leaving out the vinegar at first. I added a dessert spoon of soy sauce before the vinegar, it adds some flavour. Add about ¼ cup of vinegar. Continue to mix. The mix will get more mushy as you add vinegar, so watch that you don't get a too mushy mix. Form these into little balls, flatten them and roll them in flour to cover them. Then fry them in a little butter or duck fat until the outsides are brown. Use your favourite cast iron pan!

The sauce is where the difference lies. You use an appropriate amount of tomatoes, enough to make a decent thick sauce. You may add more after starting the dish if you think you need more. The amounts are for sauce for about 1 kg of meat mixture. I added some coarsely chopped mushrooms as well.

Ingredients for the sauce

To make the sauce you mix all the ingredients except the cream, then simmer until the vegetables have gone soft. Then simply add the frikkadelle to the sauce and simmer the dish for another 30-40 minutes. Add the cream just before serving.