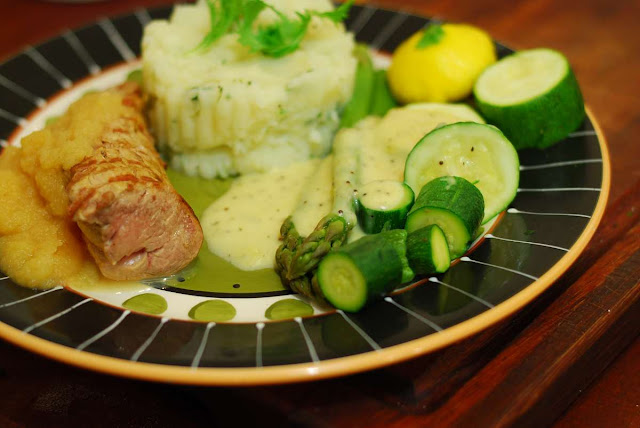 The oppressive heat here in the Strand area near Cape Town is brain numbing. It is getting harder to think clearly on identifying some romantic dishes for Valentine's day dinner. You will surprised at how much beer it takes to think up some decent recipes!

Valentine's day was coming up and the missus and I had long discussions on what to eat. A restaurant dinner was outside of our budget, so we were discussing various options for dinner.

We have lots of fresh fruit and I have used these extensively in brandied versions as well as in compotes of various descriptions. So I decided to stay on this course for a while and keep things simple for dessert. Flapjacks with a lime and vanilla caramel and cream. Dessert sorted. What of the starter? 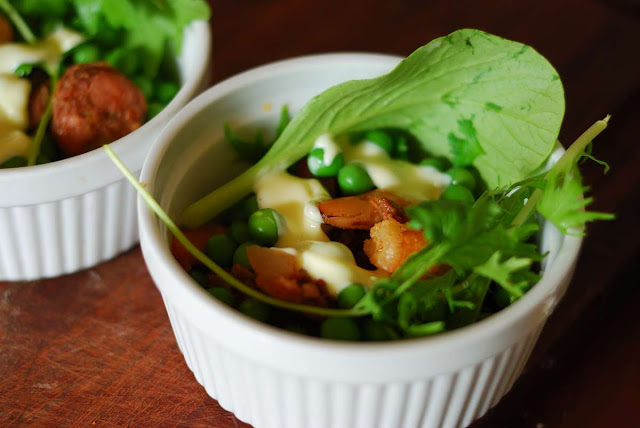 After some discussion with the missus we decided on a spicy chourizo and prawn salad. Simplicity par excellence. You need some fresh mixed salad leaves, the green stuff, half a cup of freshly steamed garden peas, a dollop of lemon juice and a dollop of mayonnaise.

For the two helpings I used eight prawns and a 100mm (four inch) piece of chourizo, cut into thin wheels. Take the skin off if you want to, it comes off anyway. Chop up and mash two garlic cloves. Fry this in a lightly oiled pan, then add the chourizo. Allow the chourizo to release some of its fat, then add the prawns. Simmer this lot for another five minutes, then dish up.

Dishing up means that you arrange some of the leafy stuff in the bottom of a ramekin, then add the meats. Add some peas over this, then garnish with a dollop of mayonnaise and a few drops of lemon juice. And, if you are into styling, add some more green, leafy stuff to round it off.

For the main course we decided on something grilled in the skillet, complete with some steamed veggies and mash. A softer option than the regulation braai food for the type of weather that we are having.

Grilled pork fillet, doused in an apple sauce. We have not ever had this before. The fillet was grilled in a ribbed skillet from Le Creuset using a little duck fat for thermal contact. The vegetables were chosen at random because they looked fresh and romantic. They were steamed in a sieve on top of the potatoes as they boiled. The potatoes were cut into thinnish slices for faster cooking.

The apple sauce were made by peeling, de-coring and blitzing two apples. The juice of half a small lime went into the mix, as well as a grating or three of nutmeg and a pinch of salt. To this lot was added half a cup of water and the lot set to simmer for a few minutes. Check that the sauce is runny enough for your taste.

The Hollandaise sauce is the stock standard stuff you get from your favourite recipe book. I added some black mustard seeds for the flavour. This lot was made using one egg yolk, three dessert spoons of cake flour, a small pinch of salt and a few drops of lemon juice. I also added some milk to get the batter into a runny mix.

Making this is becoming my favourite party trick. I do not possess a double cooker, so I hold the pan in one hand high over the burner while stirring the mix frantically with the other hand. The mix must not boil, otherwise you end up with a sticky mess omelet, so I am told. But hold your breath. I have made this twice, both times successfully. So far so good! This sauce came out quite delicious if a bit on the thick side. The mustard seeds bought just that extra flavour to the veggies.

The mash is pretty standard. This one had a dollop of cream to make it richer. It is a Valentine's dinner after all.

We have not had flapjacks (crumpets to some) for a while. Here in South Africa you traditionally make a heap of the things, then envelop them in butter and golden syrup before gulping them down hot, before the butter runs all over your hands and on to the table. Good dirty fun to have with your young children.

I proposed that we make only a few, then dish them up in proper style. This means you make a little stack with butter in between, doused with a fruity caramel sauce (another compote?) and a dollop of cream. Perhaps, if you dare me, I shall add a little leaf of mint as garnish. Us yachties also have style, you know...

The ingredients are for two servings, so scale to suit or just follow your favourite recipe. If using a lime, use a small fruit. Else just cut the slices across to have smaller pieces. These make little caramelled slices in the compote. 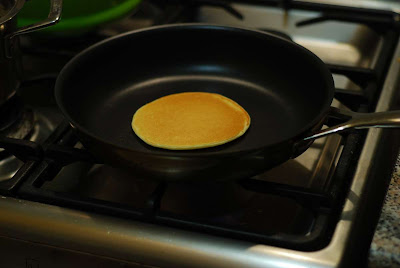 Some cream and butter (real butter, not margarine or other ersatz stuff) for dishing up.
A sprig or two of mint for garnish

Sift all the dry ingredients, then rub in the butter. Mix well, then add the egg and mix thoroughly before adding the milk/water. The batter needs to have the consistency of thick cream. Use a dishing-up spoon to ladle the batter on to a lightly oiled frying pan or skillet. You only need to oil the pan once. I use a non-stick frying pan from Le Creuset, so I don't use oil. Use up all the batter, there should be about eight or more flapjacks.

Put the butter, salt sugar and water in a small saucepan and bring to the boil. Make sure everything is mixed. When the water has almost boiled away, add the sliced citrus fruit. Stir the dish to make sure it does not burn. Ensure that all the fruit is covered in caramel and cooking. Cook until the foaming has stopped or when you think you are hungry enough, then remove the compote from the heat. Bear in mind that this stuff is much hotter than boiling water, so leave some time for it to cool down before serving. Add a little water and allow it to soak through if the compote is too sticky and toffee-like.

Stack the flapjacks into stacks of four to five high with a little butter in between and on top. Pour some of the compote over the stack and garnish with a dollop of cream and a sprig of mint. 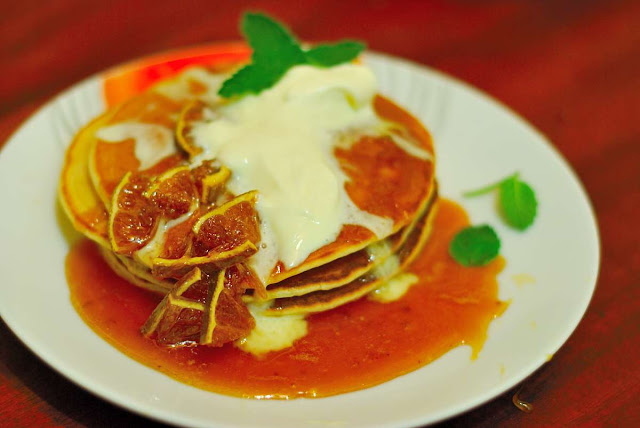