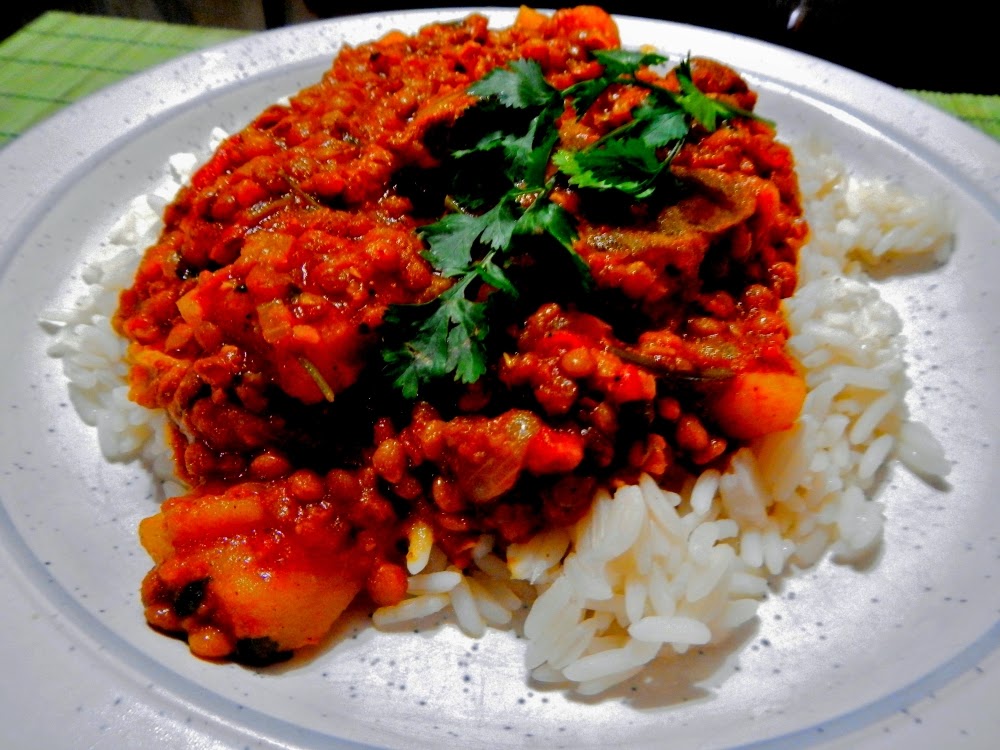 I have not really had a real chance of cooking at home for a while as I was mostly occupied with sailing instruction. This led to some severe withdrawal symptoms for a decent slow cooked dish on a cold winter's evening.


Well, such an opportunity came about this weekend, with a cold front passing Cape Town towards the end of the week, bringing with it some real winter. The weather outside is quite cold now, with the tail end of the cold front still with us.
Having had some time to consider, I thought it was time to explore the culinary styles of North Africa. Morocco came to mind, as quite a few fellow bloggers seem to like the flavour and there is a plethora of recipes on the internet. I had a short spell or two of trying to find Moroccan spice mixes, with varied results. Mostly because I got distracted by other things. 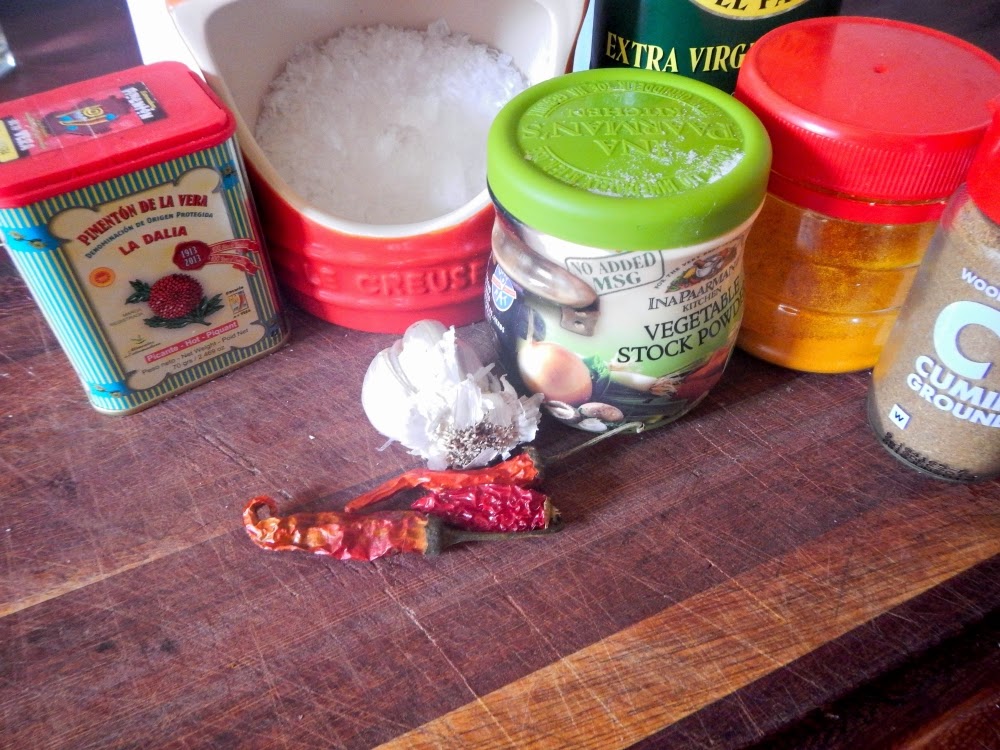 However, withdrawal symptoms are wonderfully forceful, in this case a positive force. I did some more research on the internet and found that the spice mix is quite easy to assemble from basic spices. All of which we have in the house. 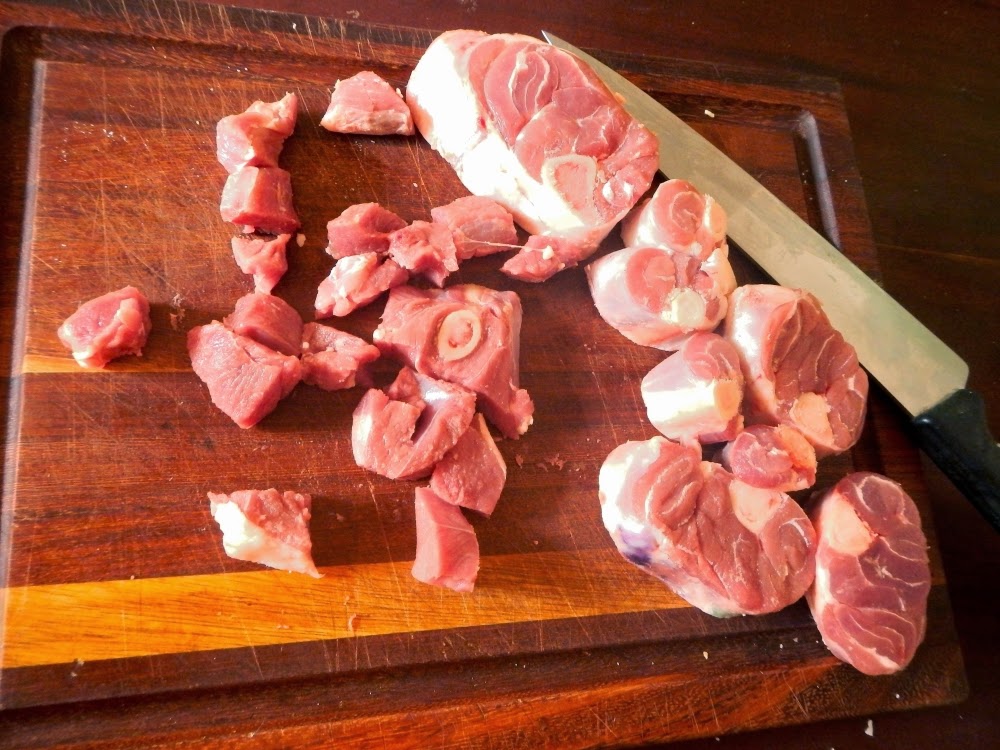 This gave the proper impetus and I went ahead. This was a real exploration, with me not having a clue what Moroccan food tastes like. I have never been there. In addition, the spice mixes that you find in places other than Morocco would probably be adapted to local palates. 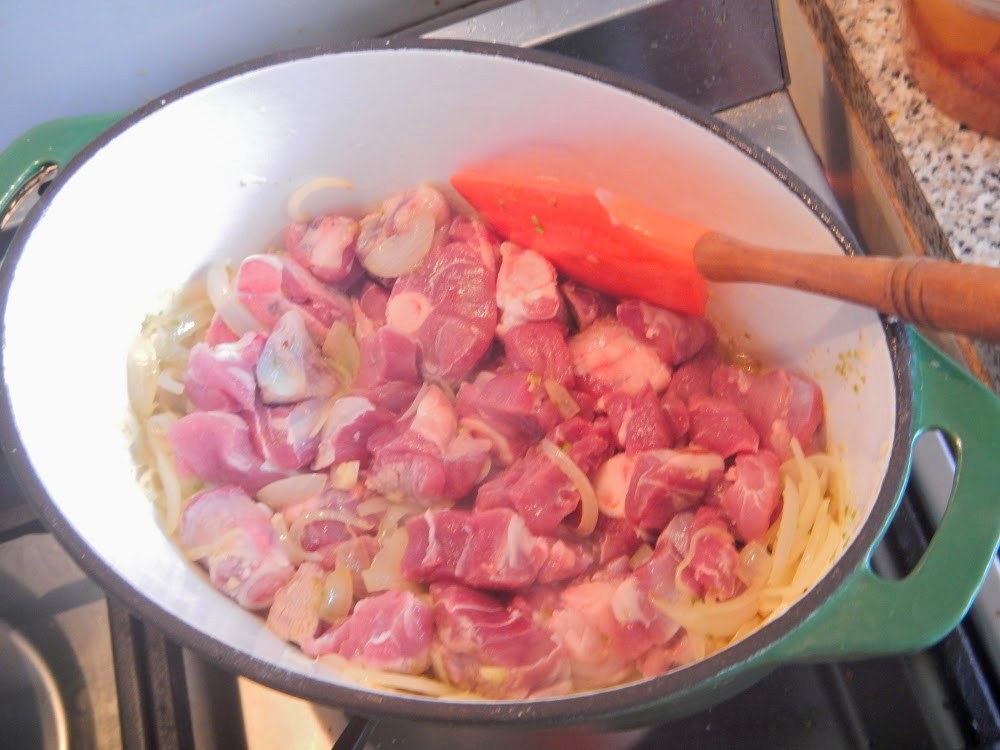 Having said that, there is also a mitigating factor in that each local Moroccan Mama cooking for the family probably has her own version of what is right. Hence my version would then be Moroccan lamb and lentils a la The hungry Sailor.

Basic ingredients for this dish consist of lentils, tomatoes, lamb or beef and perhaps a potato or two. Definitely an onion.  Spices are varied, but seem to include a hot chilli, cumin, paprika, ginger, garlic, a little cinnamon, turmeric and some lemon juice.  And of course some salt and pepper to taste. This from my research on the internet.

The process differs between places and cooks, so there I knew I was in my own well-known territory of creative processes. No pun intended.

Most of the standard recipes call for olive oil. However, if you want decently caramelised onions you need to fry them in real butter, which I did. I also used some of my masala paste, as it contains all of the spicy ingredients, i.e. ginger, garlic, chilli and a little turmeric. Or you can use a slice or two of fresh ginger, a fresh chilli and garlic to taste.


Also, I like to brown the meat a little before adding the other ingredients. The caramelised part of the meat adds some flavour to the inherent stock formed by the cooking process.

Speaking of meat, most of the recipes call for boneless cuts. I beg to differ, as I think that the marrow adds some fatty content which adds to the taste and keep the dish from being too dry. 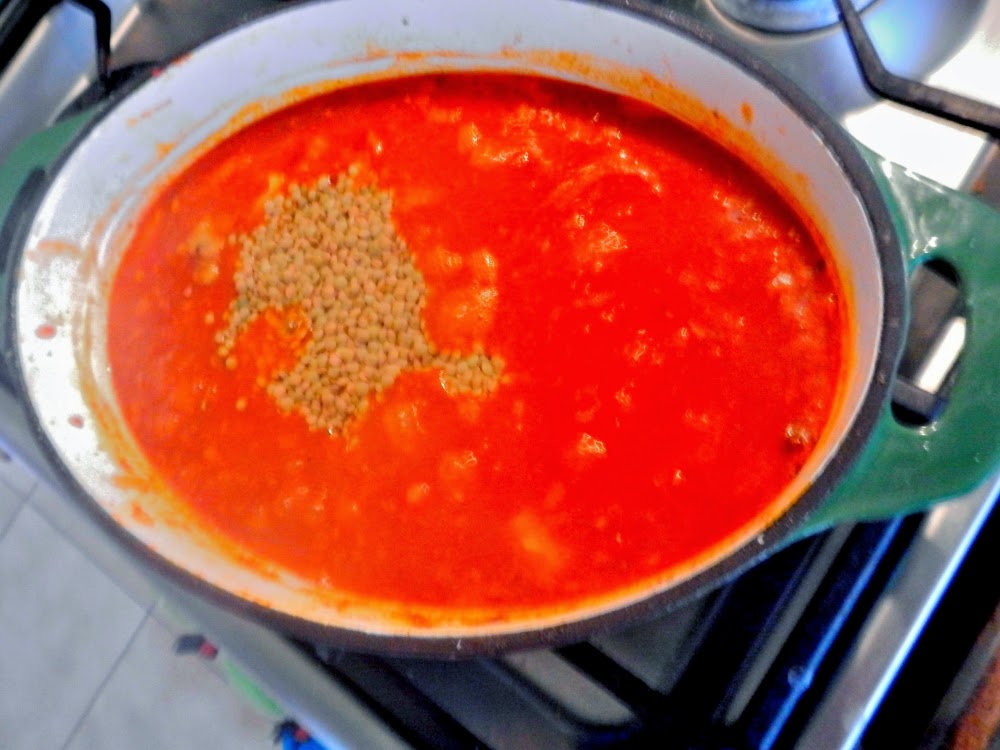 The end result was quite delicious. I shall make it again. It is a differs from the Northern Indian and Pakistani style curries that we usually make at home. This dish is not as spicy, although flavourful.

Containing lots of legumes which needs to be well cooked, this dish lends itself to very slow cooking. Many of the recipes on the internet go for the fast and furious option of a pressure cooker, which I abhor. I also prefer to cook the meat very slowly.

The list of ingredients seems long, but please bear in mind that I am using pure spices, not spice mixes. You may add some honey, golden syrup or sugar if you think that the tomatoes and lemon juice will make the dish too acid. Many of the recipes on the internet include honey.

We had this dish with rice, but it is certainly well worth the effort to make rotis or chappattis as a side dish. 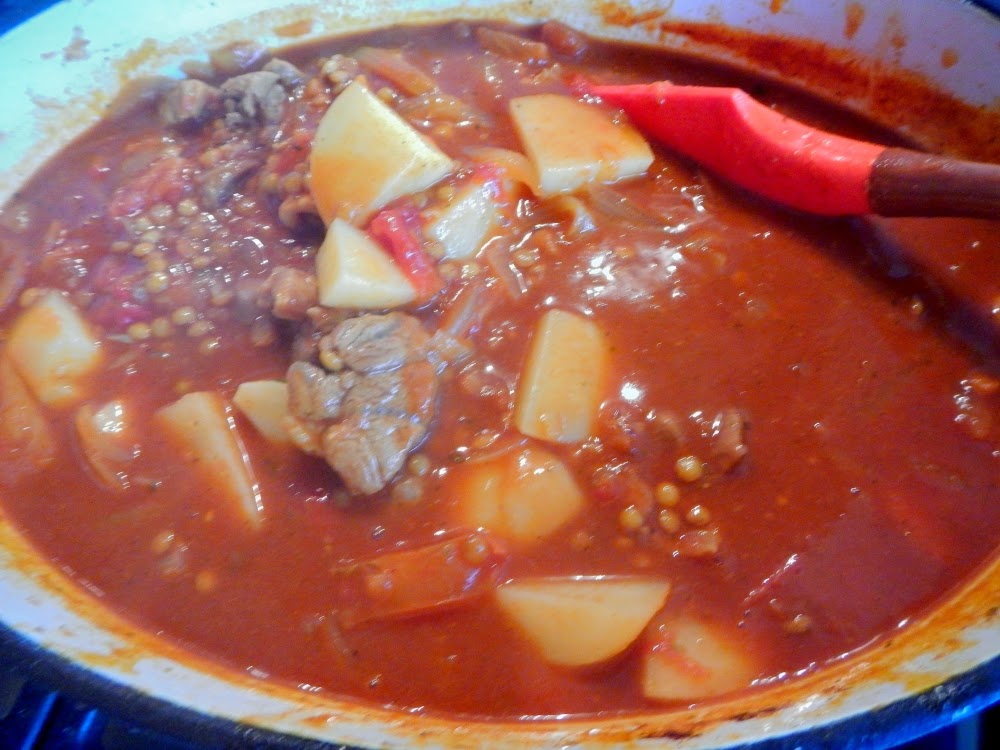 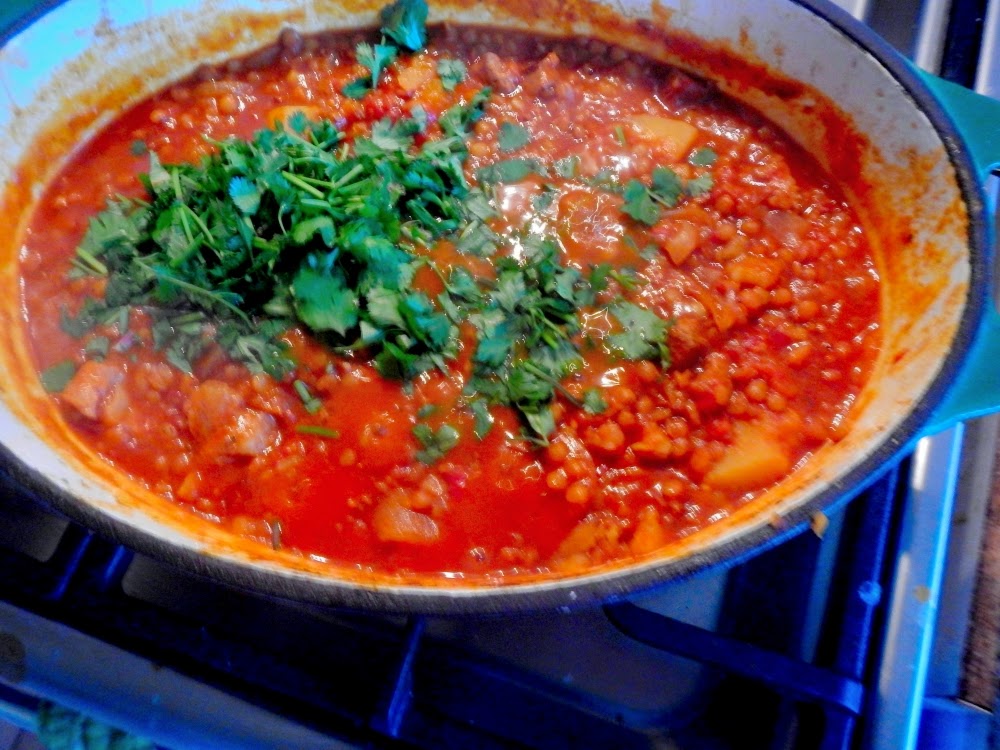 
Melt the butter in the pan and add the onions. Fry the onions until they are translucent and getting brown on the edges, then add the mashed garlic and the masala paste.


Fry this for another minute or so, then add the olive oil and the meat.

Fry the meat until it is brown enough to taste, then add the canned tomatoes, the fresh tomato, the tomato paste and all the dry spices. Add the lemon juice and the vegetable stock. Mix through thoroughly and turn the heat right down to let the pot just simmer. Add salt at this stage. I now regularly use Maldon or other flaky sea salt.


Add the lentils after twenty minutes to allow the meat to cook a while. The lentils will cook faster than the meat. Simmer the dish for another half an hour or so, until the meat starts to go tender. Then add the potatoes. 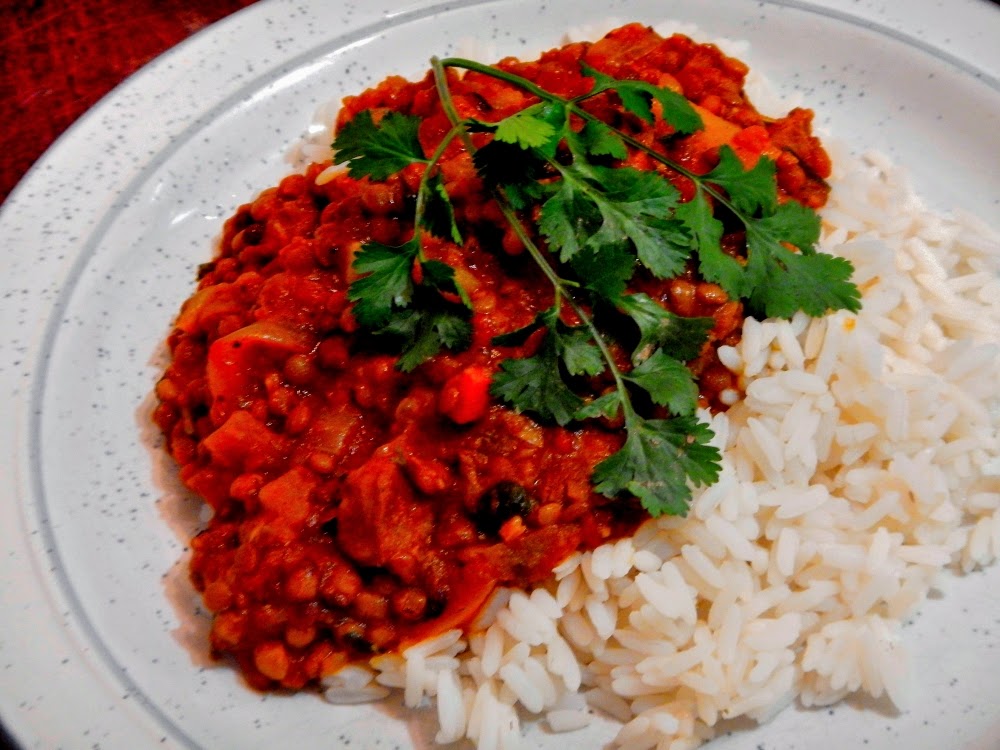 Simmer until the everything in the pot is tender to your taste, then turn the heat off and add the coriander leaves. Allow the dish to rest and develop flavour for at least an hour.  I use an enamelled cast iron pot. They cook a lot better than anything else and this resting of the food works better with their heat retention characteristics.

Now cook the rice. This will force you to let the dish rest! Then dish up.