Travelling Through The Mists Of Time 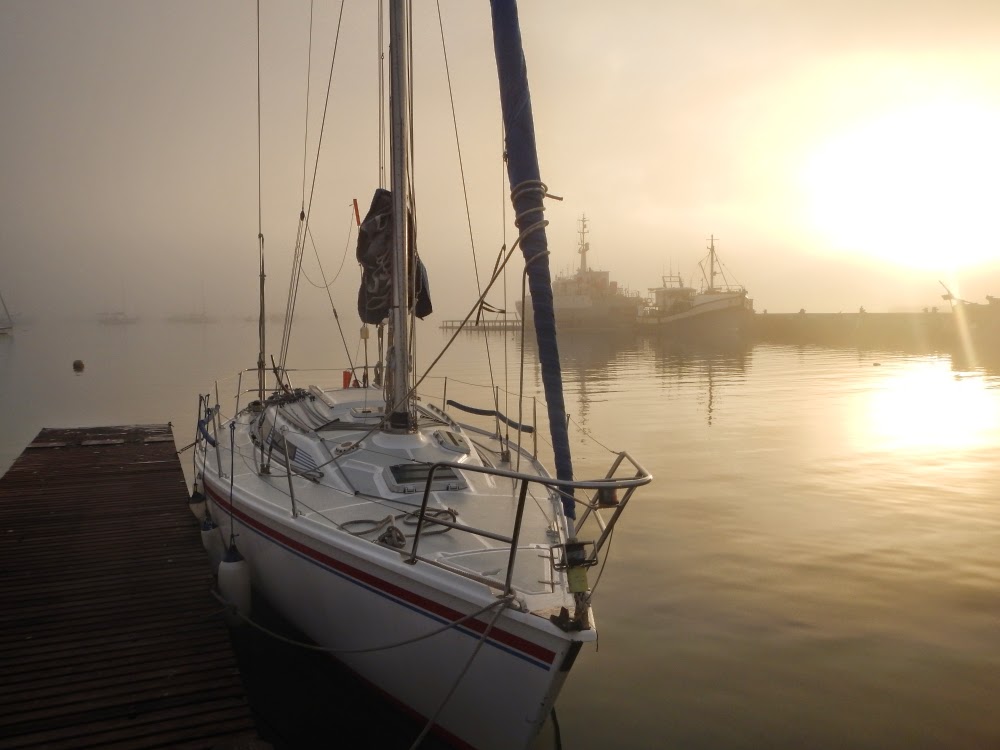 Every voyage by sail boat is a new adventure. I have travelled many miles in our local waters this year and every time there was something new.

You get to understand, perhaps, where some of the seafaring stories of old come from. Like the story of Van Hunks and his pipe challenging the devil himself to a smoking match. And not to forget the story of the Flying Dutchman trying to get into port at Cape Town. Don't take his mail from him, for then you will also be forever doomed to sail the dark and misty waters around Cape Town.

One gets these ideas out on the ocean when there is adverse weather.


On this last voyage it was for real. We travelled through the mists of time and had the most wonderful experiences.

In fact, we experienced all the possible weather conditions imaginable. We left Cape Town in a howling gale, albeit in bright sunshine. Then we had to motor the last bit into Saldanha bay as the wind left us.

We arrived at our destination just in time to dock in the dark. That dark time just after dusk and before the last bright light of the sky has disappeared. When shadows are very dark indeed, especially when docking at a strange place for the first time.

We had good fun along the way though. The swells out of the south west reflect off the coast, then make an interference pattern with the incoming swells. This creates a veritable washing machine effect. You get mostly broken swells and small choppy wavelets as a result of this mixing. This is interspersed with the odd one that actually compounds into something in the order of five meters.

The boat mostly corkscrews over these, but you get to surf the big ones. Imagine surfing a four and a half ton boat. We were doing just that when we noticed whales in the swells next to the boat. They also seemed to enjoy the weather, but it was difficult to see whether they were actually surfing or just on their way somewhere.

It was somewhere north of Robben Island when the boat did not surf, but just slid sideways down the face of a five meter wave. We hit the bottom of the through with a gut-wrenching lurch, enough to wake up everyone lost in the reverie of the nice sailing conditions. I had a very wide awake crew after that.

Later in the week we travelled to the quaint little town of Paternoster. The weather had settled and the wind subsided by this time, so we had to motor there. Anchored in the little bay, we had the most magnificent view of the both the town and the sunset. I suppose the townsfolk had a magic photo opportunity too, complete with a sail boat in the bay. Not something seen every day.

That night was magnificent, with the town lights reflecting on the water and hardly any wind. The stars, of course, always look like you could pick them out of the sky. But it was cold, so we cooked dinner and went to bed early.

Just as well. The next morning dawned grey. Very grey indeed. A thick fog enveloped us, with visibility down to around fifty meters. With absolutely no wind the water looked oily smooth. Some time later the sun came up. We knew the sun was up because the grey went a lighter shade.

Eventually the mist thinned a bit and the visibility changed to around one hundred and fifty meters. The sun made a wan appearance for a few minutes, then the mist settled in again. Real blind navigation stuff here. Luckily for us Paternoster is not situated in the most populous place as regards shipping, so we were reasonably safe where we were. However, we had to get back to Saldanha Bay, a distance of some thirty odd nautical miles away. 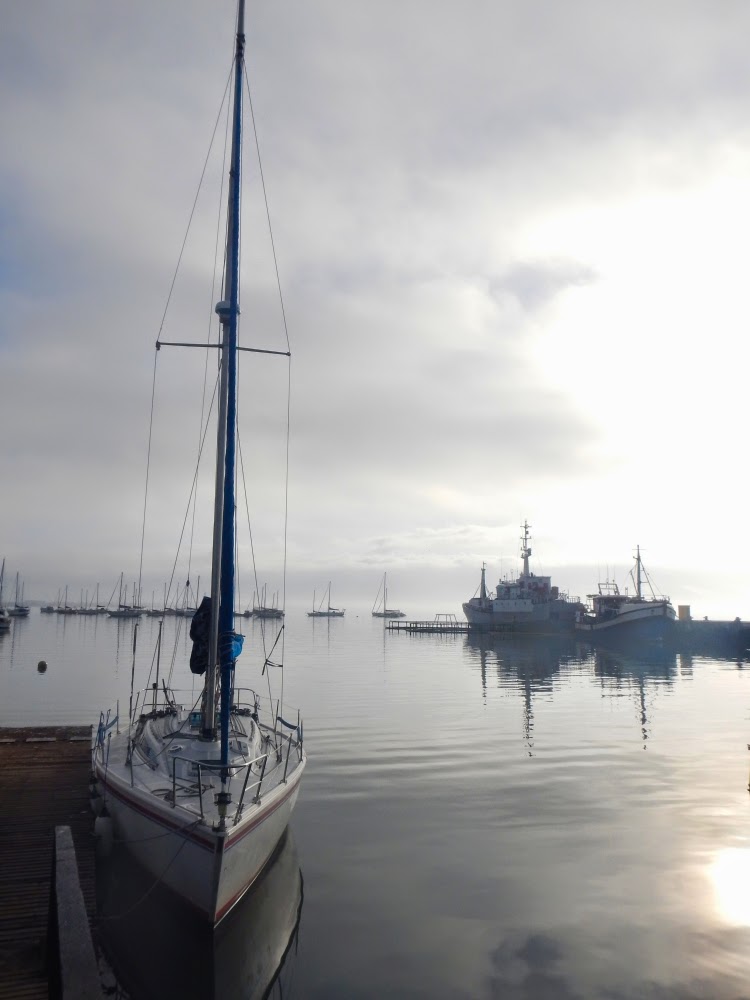 This meant travelling through this thick stuff with special attention to navigation and all available beady eyes on the lookout.

And here we were, motoring along gently and slowly, keeping a careful lookout for other traffic and navigation hazards. This is where one's eyes and mind start to play games with you. The intense concentration on the environment causes one to see things. A dark shadow here, a white splash there.

In fact, quite a number of white flashes. We were quite worried, until we realised these were seagulls taking off as the boat approached, making a splash in the water. The fog made it seem like the bow wave of a small boat. Some of the dark spots then translated into the dark backs of other sea birds.

In all of this we had quite a scare too. Suddenly we had a big splash just off our port bow. A hurried check on the GPS confirmed we were far away from any rocks. So it must be traffic. Another splash got our hearts stuck in our throats. Then we saw what it was. Traffic, all-right. In the form of a pod of whales. Five of them.

The first one was some distance in front of the others, making the first splash. Our hearts were still stuck in our throats, as these animals are all much bigger than our puny little boat. They crossed our path by diving under the boat. Very scary indeed.

And here is where we had this eerie experience of travelling through time. The last we saw of the land was the previous night before we went to bed. The beautiful lights of the town lining the little bay. The last we saw of the sun was as it set over the ocean the day before. And we were surrounded by a thick grey mist. You lose all sense of movement. Of course, you know that you are moving, but there is no sense of distance.

Only time. You measure distance travelled by time passing. Not even the GPS instruments will give you a sense of having moved along. Yes, it gives a picture with a line on it. But after a few hours you lose sense of direction and where you are. You are enveloped in a grey cocoon, where not even the sun's rays can penetrate. The boat gently bobs and rolls on the sea, which makes it even more difficult to sense your advancing movement.

The first that we saw of the sun or land was after we entered Saldanha Bay itself. Before making the last turn we had to call port control to confirm that the harbour entrance was clear. We don't have radar, so things may get dangerous in the event that there is other traffic in the harbour entrance.

What a wonderful experience to see the sky clear, the sun out and to see land where you expect it to be.  After six or seven hours of this fog, seeing land is indeed a blessing.

And perhaps we did travel through time. Being cut off from modern technology and your senses takes one back several centuries, if you will. There is also the sense of sharing some experiences with the sailors of old.

After this you travel through your own comfort zone with a different view.

And, to top it all, now we all have some more tales to tell...