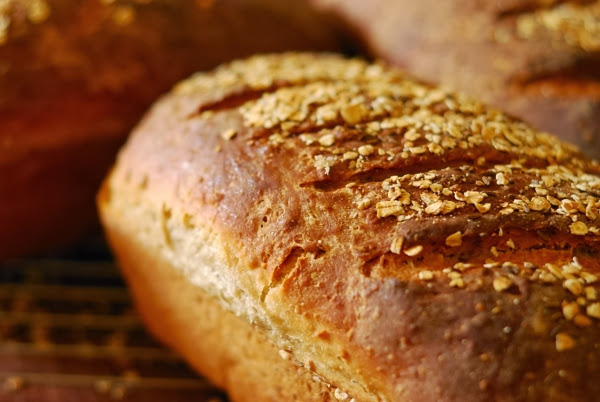 Interesting how we all learn mostly from our own experience. Edward de Bono has written at length about the thinking process and thinking mistakes. And somewhere the idea emerges that problem solving is a process that will get you back to where you were. Progress requires different thinking.

And so it is with me too. I wrote a whole blog post describing a way to get out of a thinking rut in the realm of photography. Then, in the wee hours of the morning when everything is quiet except for the noises from the southeaster howling outside, it dawned on me that perhaps I am in a baking rut too. In a way of speaking.

Later that morning, after the early morning chores had been attended to, I opened my copy of Crust And Crumb by Peter Reinhart. The book is a veritable treasure trove on the various processes going on inside the dough. Worth reading several times and keeping it as a ready reference when planning your next loaf.

I decided on a multigrain sourdough loaf. Just for the difference in process and a new way of preparing the dough. I have never made bread that took longer than a morning or so, from preparing and kneading the dough until the baking is done. This was a going to be a first for me. 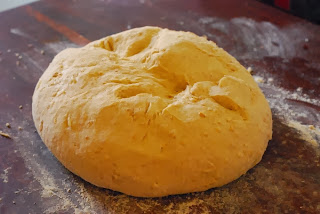 The project started off with feeding of the sourdough to wake it up. Then it was fed twice a day over two days. I decided on a biga style sourdough, which resembles a dough, rather than my normal batter-like sourdough. By the evening of the second day the biga was almost walking out of the refrigerator, so I popped it into the freezer. I had to slow things down a bit, as I was not going to stand kneading dough in the middle of the night!

The next morning the biga, now frozen solid, was taken out to thaw. I cut the block into smaller pieces to get it thawed quicker.

In the meantime I gathered the rest of the ingredients. Quite fun, as we do not normally have the ingredients listed in the recipe as standard items on our grocery list. However, the book says one is free to experiment. So I did.

I did have some left-over cooked basmati rice, which I used. Then I added some maize meal as the coarse corn flour part. Braaipap for my South African readers. You may substitute this with some corn flour that is used to make tortillas. We can't make tortillas with the maize meal we have here, and you can't make mieliepap with the stuff they sell in Mexico for making tortillas. But for this bread it is all about the flavours. 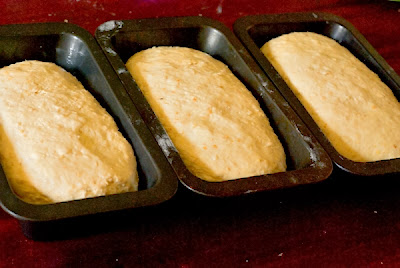 There were also semolina, rye flour, brown bread flour complete with some bran and rolled oatmeal in the multigrain mix. You may experiment, but keep it to the quantity listed in the recipe, otherwise you may find that the loaf is very brittle as a result of too little gluten in the mix. The ratios given in this recipe is an indication only, experiment to your heart's delight.

I also added two tablespoons of vegetable fat to the mix. This helps with keeping the bread from drying out too fast. It then lasts for some days instead of drying out overnight.

The instant yeast is just one sachet. Here in South Africa it comes in 6 gram sachets, which translates to 0.16 ounce. Bear in mind that there is already some very lively yeast cells working in the dough, so this is just a booster. As for the buttermilk, the recipe calls for ½ cup,which I doubled. This left me with a trickle of buttermilk in the container. Next time I shall add all of the buttermilk and adjust the water content in the dough. In the quantities I used, this will not make a huge difference.

In terms of the process, I tried to follow this within reason. Mixing is by hand, so is the kneading. The quantities given in my book were doubled to make three medium sized loaves.

This experiment resulted in the best sourdough loaves I have made to date. The multigrain content provides a palette of flavours, ending with a sweet after-taste. This bread also got discernibly sweeter the longer you chew on it. A wonderful recipe, definitely a keeper for me. 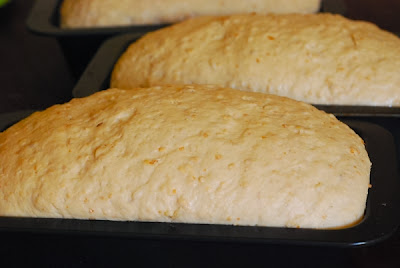 And now I have a much better understanding of how to treat my sourdough!

For the multigrain blend 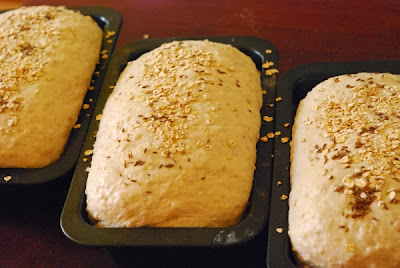 Mix the biga into the other ingredients. I normally add the vegetable fat only after a few minutes, giving the gluten time to develop. Otherwise you may also end with a brittle crumb in the loaf.

Knead the dough until it becomes satiny. You will find, as the book describes, that the dough is quite gritty in the beginning. This is due to the coarseness of the multigrain mixture. This coarseness will disappear as you knead. I follow the advice of Peter Reinhart by testing the dough for elasticity. He calls it the window-pane test. The dough should stretch to a translucent state and keep the thin membrane. If it doesn't, then it needs more kneading or the dough is too dry. I don't have fancy equipment or a controlled environment, so this look and feel method works for me. 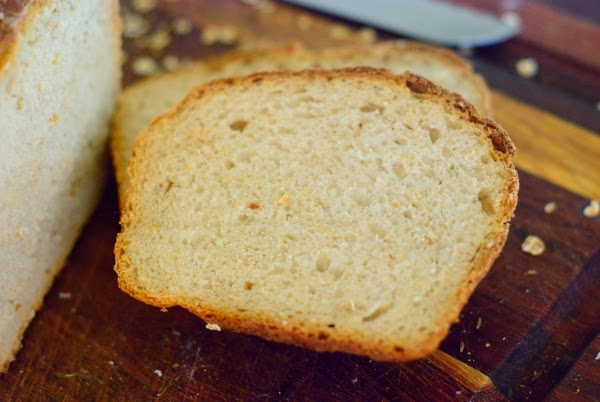 Incidentally, from another source I learnt to taste the raw dough. If it does not have a pleasant taste, something is wrong. In my case, it is the quantity of salt. But this method works well. Pleasant tasting raw food normally results in very good tasting cooked food.

This dough is supposed to be about 65% hydration, so it is on the soft side, but still knead-able. This mix of mine came out nice and elastic and I was just able to fold it. This was left to rise for ninety minutes or so, by which time the volume had more than doubled. Remember to pat the dough with some cooking oil against drying out during the first rise. 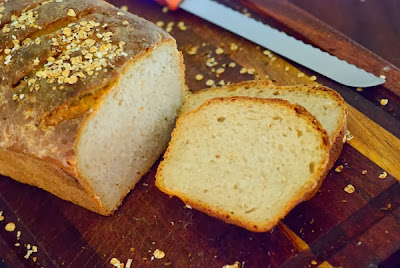 I folded this a few times without jarring it to get it back to the almost the original volume. This ball of dough was then divided into three balls. These balls were shaped by rolling and folding them into a flat cylinder shape to fit the bread pan.

I used greased bread pans and then dabbed some oil on the tops of the loaves again. These were left to rise until the dough protruded above the bread pan rims. Add some rolled oats as garnish and pop these into the oven.

I nowadays use both top and bottom elements in my oven, no fan, and I spray some water into the oven. These loaves were baked in the oven pre-heated to 230ºC /450ºF for ten minutes, then the temperature was turned down to 175ºC /350ºF for the rest of the baking period of forty five minutes to one hour. The oven was misted on introduction of the loaves, then again at ten minutes and fifteen minutes. Depending on the shape and size of your loaves, the baking time may vary. Check after forty five minutes to see if the loaves have baked through. They sound hollow when tapped and should have a nicely browned crust. 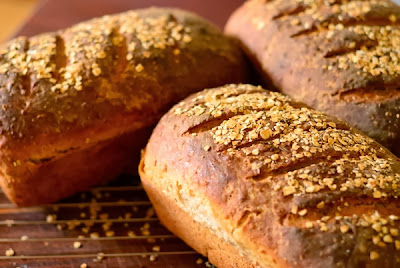 Turn them out to cool for an hour before slicing them. They are full of steam and quite brittle when they emerge from the oven, so don't be tempted to slice them. You may just spoil a very good loaf into a brittle mess.

And remember, use real butter!