A Summer Sail And Crayfish Season: Time For A Feast 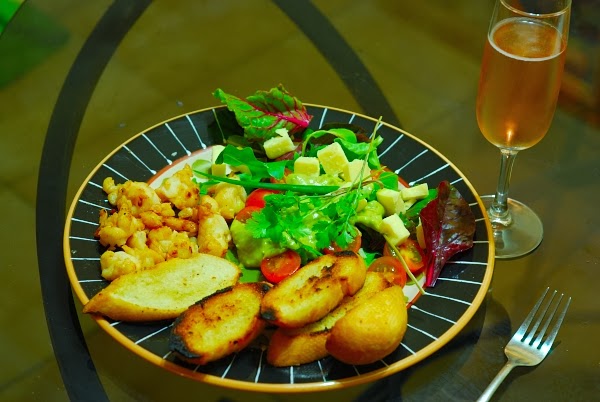 The crayfish season in the Cape opened on 15 December for non-commercial taking of crayfish.

Over here it means that we have to wait for the weather. Having a licence is the least of the problems of obtaining this delicacy from the sea.

We waited, planned and aimed for two days, depending on the weather. Crayfish season overlaps with the real windy season here in the Cape. However, this time there was a small cold front passing the Cape, allowing a brief respite from the howling southeaster. 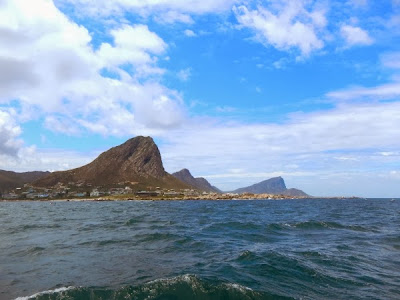 We went out in a friend's yacht by the name of Moppie, a Sadler 32 sailing yacht named after the Cape style songs. Had a quiet sail from Gordon's Bay down to Rooiels where the crayfish grounds lie.

Of course, it looked like your church bazaar in a rural village with all the boats on the water. These included ourselves, being the only sailing vessel in the fleet, along with a plethora of rubber dinghies and other motor boats, rounded off with a middle aged couple from Rooiels on a paddleski. Fun on the water indeed! 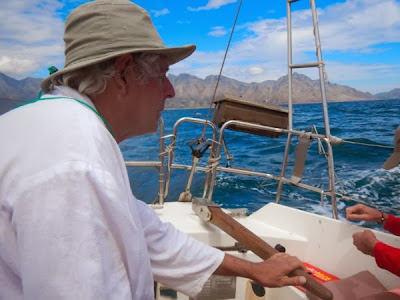 There were some clouds around, with the odd few drops of rain, but nothing to spoil the joy of being out on the water in one of the most beautiful parts of the world.

We put out three nets and motored around for twenty minutes or so, waiting for the crayfish to start feeding. We then pulled up the nets one by one, replacing them in different places when found empty. This went on for two rounds and we were almost getting worried about blanking for the day's crayfishing. We had the sum total of four small crabs to show for our efforts. These were returned to the water.

Our fortunes changed very fast, however.

On the fourth round of trekking (pulling up) the nets, we found seventeen crayfish in the net, most under size. We kept two, placed the net in a new location and went to retrieve the next one. This one produced eighteen crayfish, most of which were over size. A haul of biblical proportions indeed!

This went on for the other two nets as well. So we sorted them, kept the largest ones and returned more than forty over sized crayfish to the water. Pity we did not have more licences.

Needless to say, we sailed back to Gordon's Bay on a gentle breeze with a song in our hearts. What a way to spend a day!

Having my share of the haul then called for some careful planning. This was my first ever successful crayfishing trip. Never before have I had fresh crayfish to cook. And it is summer here in the Cape, Very hot. 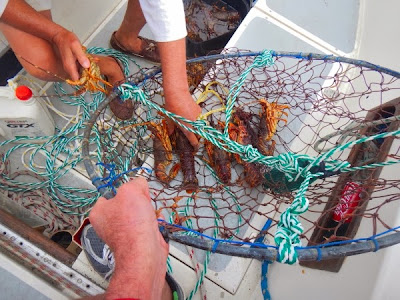 I decided on a salad style dish, with crayfish fried in garlic butter, served with avocado mousse, salad greens and slices of baguette fried lightly in olive oil. This was accompanied by a Pinot Noir MCC (Methode Cap Classique or bottle fermented) rose. The salad greens from my vertical vegetable garden, of course.

Dessert was to be a fruit yoghurt. We never got that far... 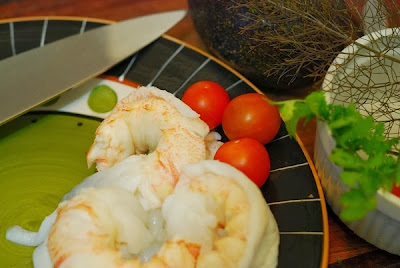 Preparation is a cinch. If you take more than about twenty minutes, you are doing something wrong. The crayfish are parboiled for five to seven minutes, then removed to a cold water soak to stop the cooking process. I used the tails only and discarded the rest. This was not going to be a messy greasy face sort of meal. Make fish stock with the rest if you really are into preservation. You then need to break all the limbs to get the meaty parts out. 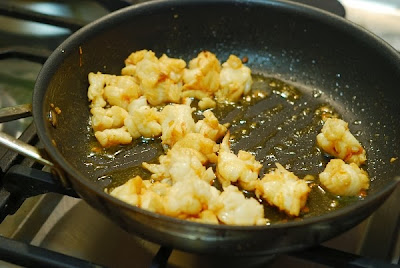 Chill the wine. Most important part of this dish, I should imagine.

Make the avocado mousse first, this will give the flavours time to spread throughout the mousse. Peel and mash the avocado, then use the blender to mix in the yogurt. The mix should not be runny. Add some salt and pepper to taste, then add the chopped spring onion and coriander leaves. Keep a sprig or two for garnish when dishing up. Add the lemon juice at the end. Leave this lot in the refrigerator to develop some flavour while you prepare the rest of the dish. 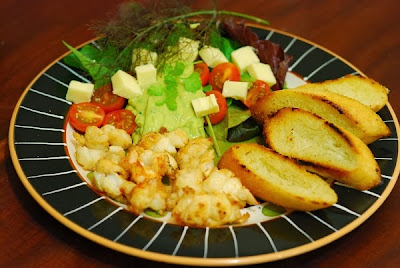 Parboil the crayfish as described. Cut open the tails and remove the intestines. Then slice the tails into steaks of about 12 mm / ½ inch thick. Heat some butter in a frying pan, then add the garlic. Fry this until the garlic has the proper shade of brown then add a small dollop of cooking oil. This will stop the temperature from rising higher and the garlic butter from burning. Add the crayfish steaks and fry them until they are nice and golden brown. Remove them from the heat and allow to repose while you fry the bread.

Slice the baguette on a slant so you have elongated slices. This does nothing to the flavour, but does add some shape to the end result when on your plate. Heat some olive oil in the pan with the juices from the crayfish. Add the slices and fry them till they are browned to your taste. These may soak up more oil than you anticipate, so keep some olive oil on standby.

Dishing up is as easy as arranging some salad greens on the plate, add a ladle of mousse, a sprig of coriander leaves, the bread and the crayfish. 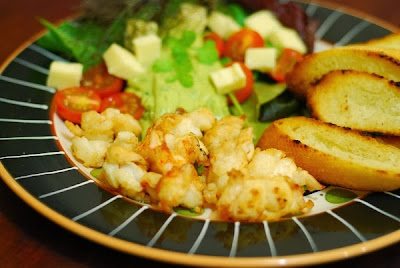