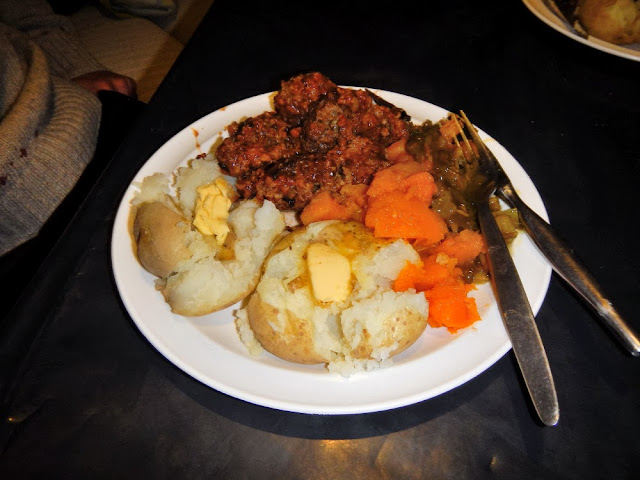 We had yet another cloudy day today. Although the wind has died down to a mere puff every now and then, the sky is still mostly overcast. We are motoring along on a smooth sea.

And in the very darkest nights. The moon only rises early in the morning and, given the overcast sky, we are having really dark nights. You cannot even discern a horizon. Sometimes the clouds part just a little and with a bit of luck a star peeks through. Then you feel comforted that you have not lost most of your senses. The star is like a message from on high passing some positive energy back to you. 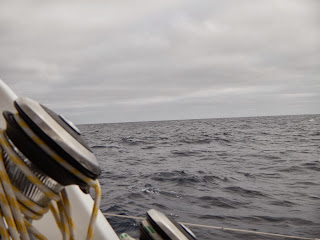 Yet again I realise where the folklore of old sailors and their beliefs come from. It is easy to get lost in the oceans of your mind. But it is a rather nice feeling. I have had this revelation before. But it remains a nice feeling to be reminded of the way the mind works. Lots of mental images and perceptions in this blue world that we enter from time to time.

We have seen the odd humpback whale since yesterday and there are still some birds around. They seem to follow the boat, rather like scavengers. One wonders whether this is a new habit formed of close association with increased yacht traffic.


Today was my turn to cook dinner. We have a rule on board of alternating beef mince with other meats, so as to prevent the monotony of similar meals when you run out of other food. This is now becoming a small challenge of kudos for the best meal given the standard provisions. This time around there are three of us liking to cook. This makes for more fun on this voyage than I anticipated.

So we all have our turn at cooking beef mince. And today was my beef mince turn.


I made a traditional dish of meatballs and gravy, with potatoes boiled in the skin and butternut squash. The meal was rounded off by a curry bean salad, also a traditional South African dish. 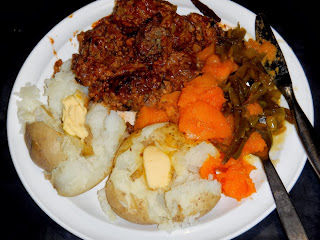 The chutney is not readily available outside of South African influence, but may be substituted with a mild to hot chilli pepper, chopped, some apricot jam and a dash of vinegar. The oatmeal stretches the meat a little and adds some sponginess to soak up the gravy.


Some butter for frying. 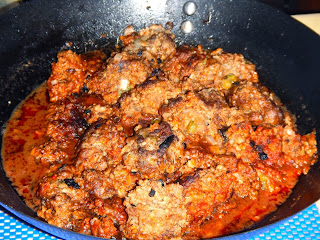 
a dash of soy sauce


Now use two spoons to make small balls of the mix, roll it in the flour, then fry them in shallow butter. You will need to cycle them out of the frying pan to make room for more. When all is done, add them all back to the pan.


Mix the soy sauce, tomato paste, gravy powder and the leftover flour, complete with the meatball crumbs into a sauce. Add water to make it runny, then add the lot to the frying pan. Simmer this for another ten to fifteen minutes, then take off the heat and allow the dish to rest while you cook the rest of the meal.


Simmer this until the water runs dry, then allow the squash to caramelise. Test the squash to ensure it iscooked through, else you may end up with burnt raw pumpkin. Add water if necessary. I add enough water to cook the dish properly, then take the lid off to allow the water to evaporate faster.


8 small potatoes. I allowed two per person. These are boiled in salty water in the skin and served as they come from the pot. We dabbed some real butter on them.


Reheat the meatballs before serving. Hopefully you were successful in keeping prying fingers of sailors sampling out of the dish.