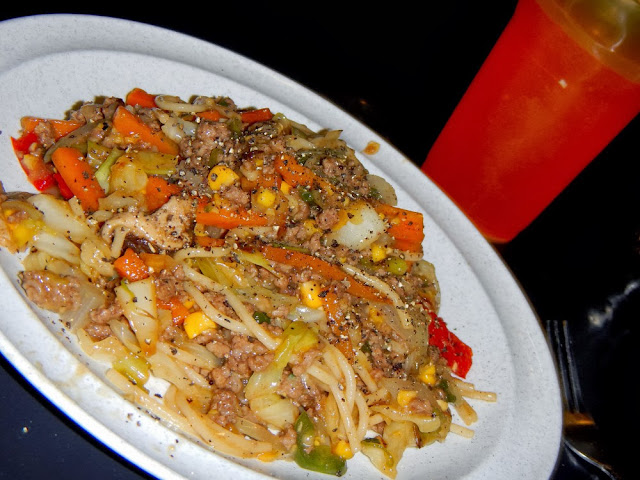 Just as we were beginning to think the weather was clearing, we met with squally weather. On a Friday which is our bath day. The one day in the week that we are allowed a shower. I actually managed to get exactly one sun sight reading before the clouds set in with a vengeance. I still have to do the sight reduction and plotting, as it was quite late and I had to prepare dinner.


On this boat it is a definite advantage to have a shower. Especially when the motors have been running. Then we have hot showers as the boat is fitted with proper geysers. These work off the engine cooling as well as off shore power when connected. For now, the engine heat is enough to heat the water to way beyond comfortable temperature. In fact, you can almost make coffee. The wonders of modern engineering never cease to amaze. Thank heavens for small mercies like these on a cold and blustery Friday.


At the time of writing we are about 140 nautical miles away from the island and making good way in this wind. Another blessing in disguise, I reckon. We shall be arriving at the island half a day earlier than expected as a result of exactly this blustery weather. Then comes the part of whether the authorities will allow us ashore by clearing us in. We are arriving at a most inopportune time, as the Springboks will be playing against New Zealand at the time of our arrival. Interesting bureaucracy in the offing, methinks. In the event we are only cleared in on Monday morning, we shall be doing the various services required at this stage while we wait out the day.


This afternoon our crew saw a yellow fin tuna jump out the water, probably after some small bait fish. In turn, the crew almost jumped out of his skin. We had not been able to fish during the last few days as we were making good sailing time and the skipper felt it prudent to keep going while the wind lasts. You never know when we shall hit the doldrums and need the extra diesel.


It was my turn to cook again. I made an Asian style stir fry beef mince dish. Well, as Asian as I could make it with the ingredients on hand. Italian spaghetti, South African beef mince, butter instead of oil and a can of creamed sweet corn to boot.


The spaghetti may be substituted with rice, especially brown rice. Rice makes a change for the better to both the texture and flavour of the dish. Use one cup of rice for every four people.


I used all fresh vegetables and some dried Shitake mushrooms. The result was quite edible, if somewhat eclectic. We have only Jalapeno chillies on board, nothing hotter, so I used two. At least we got the flavour. I also used the last of our batch of fenugreek sprouts. These little sprouts impart a slightly bitter flavour and make a juicy addition to the mix. 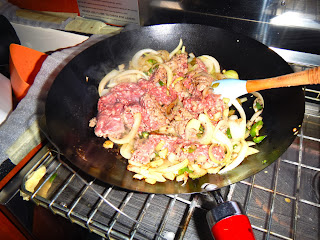 I also used some black mustard seeds and coriander seeds to add to the flavour. The spaghetti, meat and vegetables were all mixed before dishing up.

This dish came out quite creamy as a result of using creamed sweet corn. We don't have anything else in the line of corn, so that was it. The sweetness was exquisite and the dish had just the right amount of saltiness from the soy sauce. I chopped half of the onion Chinese style, the other half into the normal diced style. This gave me some texture i8n the dish. The carrots were roughly julienned for the same reason. Something to look at while you are eating.


some butter for frying


Start by reviving the mushrooms by soaking them in boiling water. 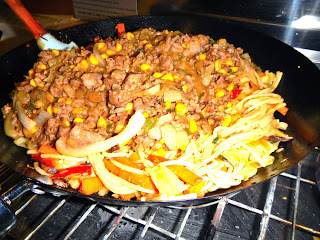 Fry the mustard and coriander seeds in a little butter until the flavour comes out, then add the onions and jalapeno chillies. Fry until translucent. Add the meat and fry until the meat is brown, then add the sweet corn and a dollop of soy sauce. Simmer this until some of the fluid has cooked off, then set this aside to rest.


Use the same pan, in our case a wok. It is now flavoured with your ingredients. Add a little butter to the pan and fry the garlic and ginger mix until the flavours come out nicely, then add all the vegetables. Fry these until they are al dente to your taste, then set aside away rom the heat. 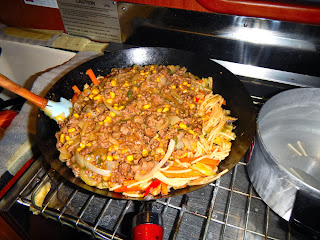 Once the vegetables and noodles/spaghetti are cooked through, add the meat mix and warm through.


Then dish up. Hopefully you have enough for four people. If they are hungry, like my shipmates, they will devour this dish in no time.