Chicken Curry In A Squall 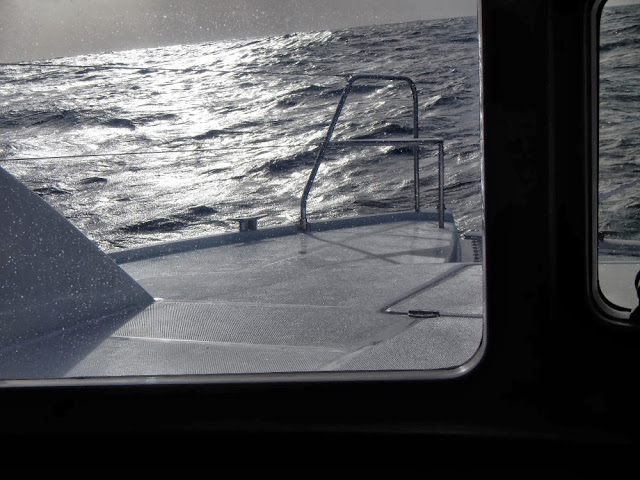 Today was our first full day of working four hour shifts in daylight hours. We are already far enough west to have set our local or ship's time an hour back.


You need to set the ship's time to the time zone according to your longitude, else your day becomes shifted in terms of daylight time. You may end up with the sun rising at 02h00 in the morning!


We are now approximately on the same latitude as Luderitz in Namibia, perhaps a bit more south. It is effectively still winter, even though we are quite far north. I guess these are the last effects from the recent cold fronts passing in the South Atlantic.


We had some squally weather today, along with some nimbo stratus clouds. We even had a few drops of rain. However, the wind dropped back to around fifteen knots (from 24kts!) and we are still sailing merrily along.


I am almost through reading The English Patient by Michael Ondaatje. There is some interesting parallels between life in the desert and life on the ocean. The people in these sectors appear to have the similar traits. Almost shying away from the mainstream urban social interaction, preferring the more intimate psychological aspects of social life on the ocean or in the desert. Definitely closer to nature. 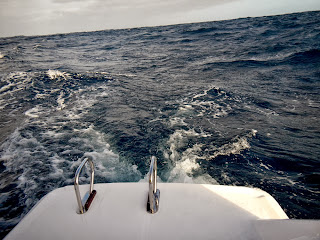 The very famous Frederick Courtney Selous fell in the same category. He preferred a lifestyle closer to Nature rather than the social life in urban civilisation. He did dally in social circles before choosing to spend more time in the bush. However, from his writings in A Hunter's Wanderings In Africa it is clear that he preferred the bush over the social scene in England.

Nature definitely offers a freer form of lifestyle. One has a lot more freedom of choice than when living in an urban context where your behaviour is dictated by the masses and conformity is the order of the day. Never mind allowing you to think for yourself. 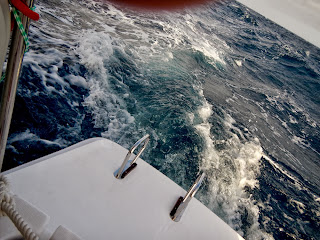 In addition, along with the freedom comes the responsibility for your actions. And Nature is merciless in dealing with the irresponsibles and chancers. People who do not understand and submit to the forces of Nature, thinking that they can be the masters of their own universes. Perhaps such behaviour may work in society, where one can wield one's power over others. But it does not work when trying this in the desert or the open ocean.


You learn very fast that Mother Nature wields the power, even though you may be allowed to harness this power from time to time.


It was my turn to cook, squall and all. As I opened the cupboard door to get the rice, the spaghetti came flying out and spilled all over the galley. An intricate game of pick up sticks then followed to retrieve the spaghetti. The cupboard was also tidied up, compliments of the squall that showed up our poor stowing practices. Mother Nature at work, I guess.


I made a chicken curry, complete with tomatoes, onions, potatoes and the requisite red masala paste. It came out quite tasty. Sensual may be a good word to describe the spiciness. Not your standard watered down pale version.


For this one I used butter to fry the onions and whole dry spices. Next time I shall use less aniseed, it tends to make the dish taste too sharp.


Fry the whole spices in the butter, then add the onions. Fry the onions until they are translucent, then add the masala paste and the dry masala powder. Fry for fifteen seconds, then add the chicken. Fry the chicken until it gets brown and covered in spice mix, then add the tomatoes. You may add a little water during the frying of the chicken as the dry spices soak up all the moisture in the pan. Add the potatoes and simmer until the potatoes are done. Add the salt to taste and sprinkle the garum masla over the dish as garnish. Stir the dish to mix the spices, then remove from the heat and let it rest for ten minutes or so.


In the mean time cook one cup of rice. I added ½ teaspoon of cumin seed to the rice as garnish.