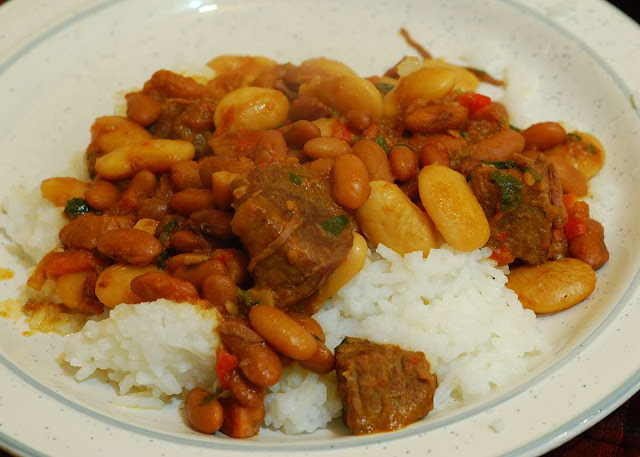 It has been a while since my last affray into the kitchen. I have been working on boats since.

I don't own a boat. I am perhaps now learning more, by working  and sailing on other people's boats, than I would have by owning and sailing my own boat. A more diverse experience.

And it is not costing me real money. A little for diesel here, a snack or two there, perhaps a spare or two of something. Definitely my time. A large portion of it.

And the real value is in the learning. Learning about the vagaries of boats, the cost of ownership and each boat's idiosyncrasies. Yes, it is true. Every boat has her own character and whims. You learn it very fast when going sailing. 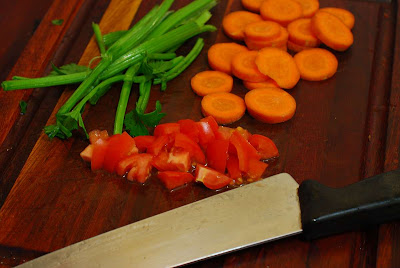 Perhaps it is the same with cooking. Every cook has his or her own ideas about cooking. Very few people I know stick strictly to recipes. Which is why one gets such a rich variation in the flavours and character of the same dish prepared by different people.

This morning I had a very interesting conversation with a kindred spirit in another, but overlapping dimension. You could think that you have warped into another world, very much like Douglas Adams' galactic hitchhiker.

And it was a simple question that caused the warp. The question was whether I was planning to make dishes from elsewhere in the world. Which really set me thinking about what I am doing. Is it of interest to people halfway around the world living in a different culture? Am I too South African in my approach?

In the end the answer was really simple, in two ways.

We here in South Africa have the advantage of a culinary environment born of a fusion of Far Eastern and European cooking. Add in the influence from within Africa itself and you are left with a very rich heritage which overlaps with most of the world's cooking.

Then, to top it all, we have the internet which makes the world very small indeed. Nowadays not even language is a barrier any more, since we have automatic on-line translators. Thus I have friends in the cooking field from as far afield as the USA, England, France, Spain, Brazil, India, Japan, China, Greece and Russia, to name but a few.

My biggest problem in preparing a new version of a dish or just the standard version, is in the fresh ingredients. We simply cannot obtain some of the ingredients here.

I would give much to be able to travel to faraway places, buy fresh produce at the market and prepare a dish or two in their local style, adapted to my whims. Perhaps, one day I shall pack up and go cruising in this fashion.

For today, I shall be sticking with a bean stew. Something to make in a single pot, using meat easily obtainable in my neck of the woods.
For the record, this can be looked at as a cowboy stew if you live in the USA, or a cassoulet when in France, or a bean 'poi kee' if you live down under amongst the other South African expats.

The meat gets cut into cubes, the sausage into wheels and the smoked pork belly into thick slices. 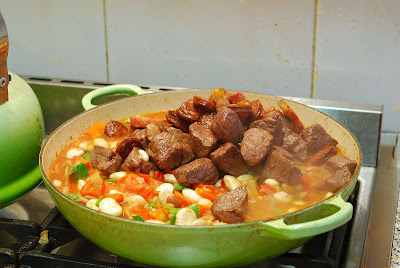 I am using ostrich meat and dry beans as a test. I have made this dish before using canned beans and it worked a treat, no pun intended. And this one is really good for a cold weather spell on board. Easy to make and it will keep the crew warmed and energetic for a good while.

There is a caveat. As always. I used a flat shape cast iron casserole. Not the right tool for the job. Use a deep pot, as for soup. The beans need a lot of heat, even though not too high. A flat casserole simply does not concentrate the heat sufficiently.

Other than that, remember to soak and/or pre-boil the dry beans for a long time, preferably overnight, lest you are left with a semi raw dish at dinner time. And if you want to do this on board, use canned beans, they are a lot less hassle on a boat.

This one came out right, the beans a bit too raw when I wanted to dish up, so we had a very late dinner. But the flavour was excellent, just like the first one. Very easy to make, no stock required at all, the process makes its own stock. Ensure that you cook this dish until everything becomes mushy and amorphous, almost like thick soup. 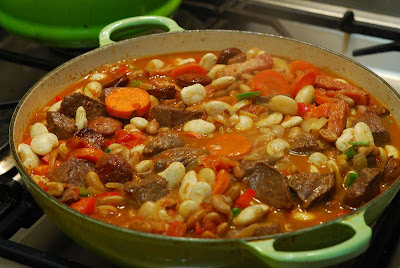 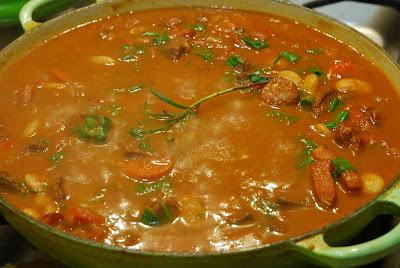 
Fry the meat in turns in a dry pan. Start with the bacon, then the chourizo, then the cubed meat. At the end of this the meat should be all browned, sitting pretty on the sideline cooking in their own juices while you are doing the rest of the frying. In the pot there should be a layer of fat and some scorching.

Now add the onions to the pot and fry them until they get brown. This will be quick, as they will pick up the scorched meat from the bottom. Add the chillies and garlic and fry these for 30 seconds, then add the can of tomatoes and the freshly chopped tomatoes. Turn the heat down and get these to simmer until everything is cooking nicely, then add the beans and some water.

The heat can be turned down to a level where the pot is just simmering away happily, not too fast. Pay attention to the water level and ensure that the food does not stick to the bottom and burn. Keep adding water as required to keep a thickish consistency.

Add the meat back towards the end, when the beans all start going mushy. Add the chopped corainder, rosemary and spring onions and stir through.

Allow the dish time to repose. That is 'rest' for those of us not of Spanish persuation. Twenty minutes would be getting there. Overnight is better, but I suppose that this dish would be for dinner tonight, not tomorrow night.

Serve on a bed of rice.

This blog post specifically compiled for the GBYC newsletter.