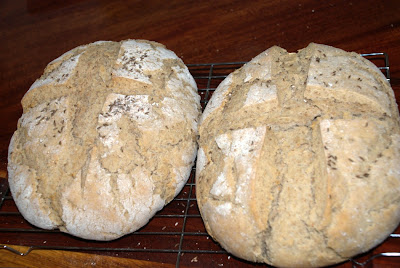 Yesterday I got a gentle prompt from the missus that we were running out of bread. Time for another loaf.

The last one was not half bad, having sunflower and pumpkin seeds along with the rye. Although it did not rise as expected, the bread lasted long enough for me to take a loaf on board the yacht for the voyage from Port Owen on the West Coast to Gordon's Bay around Cape Point. Good food to have on board.

I was a bit miffed about my starter after my last baking experiment, until I realised that I may have had the dough too runny and did not allow sufficient rise time.

This time around I made a starter by washing the sourdough, dividing it in two and feeding it white bread flour. (AP flour for my American readers.)

As an aside, it seems that my terminology and practices may be frowned upon by some of our friends in the sourdough world. I recently had the ignominous experience of having my reply reference “washing” of the starter on a blog question removed and replaced by a very scientific explanation from someone else. This after I quoted my reference quite diligently. Interesting indeed, even if I felt taken aback.

Anyway, getting back to my present experiment, I made a reasonably soft dough. Three cups of white bread flour, one cup of brown bread flour, salt and water. The starter was also made with another cup of white bread flour. This lot was left to rise for two hours, then I added a little more water. The dough was now decidedly soft, but I left it to rise overnight. Patience is a real virtue here! This was very successful with the dough almost tripling in volume. However, the dough was collapsing on itself, so I had to knead in a little flour again, about half a cup.

This lot was split into two parts, patted into long, thin loaves and left to rise in bread pans while I went swimming and tended to my other errands. By the time I got back two hours later, the dough was dripping out of the bread pans.

Time for some contemplation. 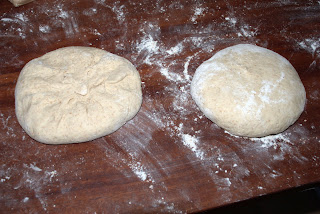 The decision went to adding yet some more flour, about half a cup again, then splitting the dough into two halves for making a pair of round artisan style loaves. I added some caraway seeds for garnish and baked them for 45 minutes at 190ºC/375ºF on my paving bricks. There was also my normal (by now) tin of boiling water in the bottom of the oven. 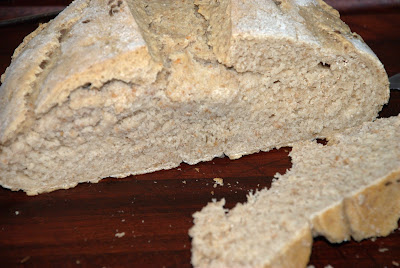 This time around the bread came out magnificent, no over-baking, solid crust and a nice spongy crumb. I was rather hoping for some nice big fermentation holes in the crumb, but it seems that I missed the boat this time around. Some more attention to quantities next time, methinks. The loaves were left for an hour to cool down.

Now for the discipline of not consuming all of this before dinner!