The Next Baguette Experiment Using Sourdough 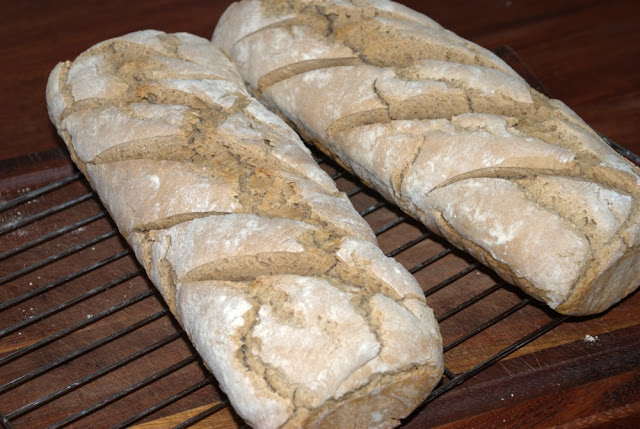 My first foray into making baguette ended in a success. I was using instant yeast for those, as I was feeling out on a limb a bit. One of the vagaries of blogging is that one's ego tends to get in the way with the cooking and you wish for a resounding success every time.

Well, the world simply does not work that way. However, it is a lot easier on the ego to just define your effort as an experiment. Then most of the results are a success because then you tend to learn a little with each experiment.

Exactly my thinking this time around. I took a deep breath, opened the refrigerator and hauled out my trusty wild sourdough. Time for the next experiment. I had already proved to myself that I can bake a decent baguette, even though it comes out a bit heavier than the industrial ones. Now it was time for the sourdough version a la Ziets.

This time around I allowed time for thawing of the sourdough to the extent of one hour. It is summer here in the Cape, with the temperature in our little town of Strand getting into the early thirties Celcius, which is quite hot. I did not bother to wash the yeast to get rid of the acid this time, but just fed both the containers with about a cup full of unbleached, stone ground white bread flour.

This was left to multiply while I went about my normal chores. The starter had more than doubled in volume in the space of two hours and it was time to make up the baguette dough.

The last cup of the stone ground brown bread flour went into the mixing bowl, along with four cups of the white bread flour. A teaspoon of salt went on top, after which I mixed this lot thoroughly before adding the sourdough. This effectively added about

one cup of water. Another cup of water went into the mix, resulting in a very runny dough. So I added another half cup of flour. This made the dough very soft. I mixed this lot by folding rather than kneading. The dough ball was oiled by patting with oiled hands, then left to rise overnight in the closed-off mixing bowl.

The dough more than doubled in volume in this
heat, but subsided into a runny mess when turned out onto


the kneading board. No sweat, I just added another cup of flour to get the consistency right; a nice soft dough that would stand by itself. This was left for another three hours to rise, before cutting and shaping. The dough again more than doubled in volume during this time. This time I got all the diagnostics right, as well as the remedial work! Chalk up one for reading the manual!

The dough was divided into two blobs, rolled out, lightly floured and rolled back up. The ends were tucked in nicely and into the baking tins the loaves went.

These were left for about two hours to rise properly again, then sliced on top and popped into a pre-heated, steamed oven at 200ºC/400ºF for 40 minutes. The steam compliments of a small stainless cup of water in the bottom of the oven.

This time the loaves came out as expected. The crust was a bit thicker than expected, but nice and chewy. The crumb had mostly even fermentation holes and was as heavy as the first baguettes made with instant yeast. At least I got the consistency right. The taste was a bit less sour than expected, which is good. Perhaps due to the absence of rye flour. The crumb colour was on the dark white side, but this is good, showing the unbleached effect. I think the coarseness of the flour also plays a role with the denseness of the resulting loaves. Have to do some research, methinks.

Now for a sandwich with real butter and mature Cheddar cheese with my morning tea, I think. 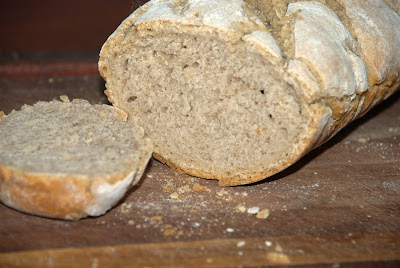