A Taste Of The Famous Cape Doctor 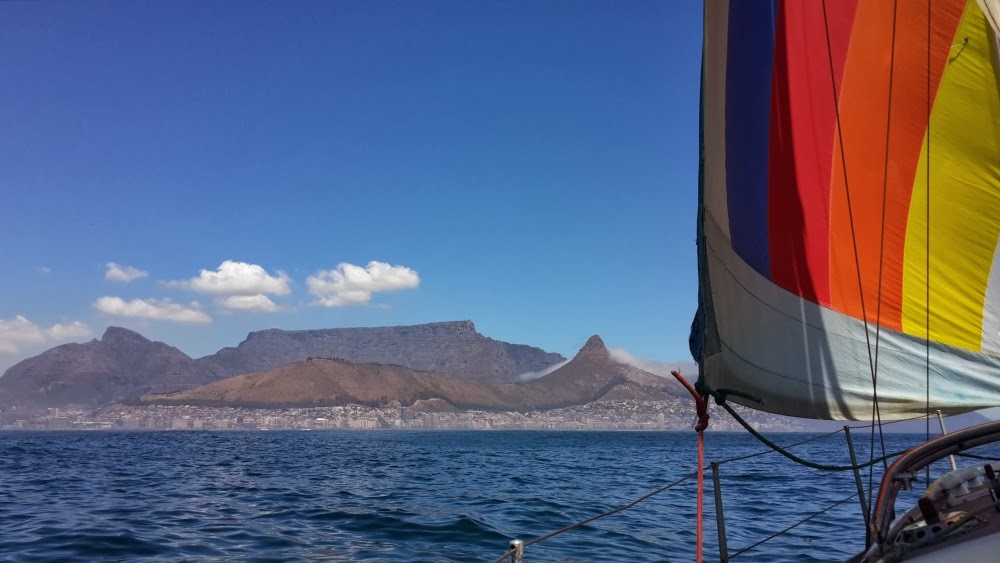 The last week saw me again introducing people to the world of sailing. Again, like every week so far, something interesting happened during the week, making it that more memorable.

This time we had a taste of serious wind. As in hurricane strength. But let me fill you in.

We started the week as normal, going through the various safety aspects and getting to know the boat. Add in some hoisting and lowering of  the main sail and end off day one with a sail in Table Bay.

On day two we provisioned the boat and had more sailing practice, including some docking and mooring. Pretty standard stuff.

On the third day we set off on a voyage to Hout Bay, some twenty nautical miles south of Cape Town. We had to beat into a mild south-westerly wind from the start, then had to motor a large part of the distance as the wind dropped. That evening saw us having a quiet meal alongside in the marina at Hout Bay Yacht Club.

The next day promised some exhilarating sailing as the wind switched to south easterly overnight. After some more docking practice in the morning, we had lunch alongside and prepared the boat for sea. By this time the wind had freshened to a tad under twenty knots in Hout Bay.

Wet and wild conditions lay before us. There is always some funnel effects around the mountains of the Cape Peninsula, with the Hout Bay area perhaps notorious.

We ran the gauntlet of heavy wind, interspersed with patches of hardly any wind out of the bay and then set course for Table Bay and Cape Town. The wind was blowing twenty two knots, gusting thirty, as we came around Hangberg, just at the entrance to Hout Bay.

Wonderful sailing conditions. Sailing a broad reach under shortened sail with the wind on our starboard quarter, the sun shining and clouds flying. We averaged about eight knots, probably peaking at over ten knots as we surfed the big Atlantic swells.  Just what one wants to make a memorable sailing experience. The crew loved every bit of this as they each had a chance to steer in these conditions.

This went on for an hour or so, then the wind picked up the pace, blowing thirty knots gusting forty.  We had to shorten sail again. This time in large choppy seas of about two meters. Not something for the faint hearted. However, we soon had the motor running and the boat pointing into the wind. This allowed two crew members to clip in on the safety lines and go forward to set the main sail to number two reef. This boat has a small mainsail, dating from an age where main sails were small and narrow and and genoa jibs were large. Reef number two reduces the sail area quite drastically.


Needless to say, the choppy seas made for quite some fun as we all got washed and splashed during this exercise. Sailing is a water sports after all.

We soon had the boat sailing again, still doing over eight knots even with the much reduced sail. More fun was had as we continued to surf the waves. This was short lived, however, as we sailed into the wind shadow of Lion's Head. The “diesel genoa” was harnessed as we continued into late afternoon on our way to Cape Town port.

Then we noticed that most of the excursion boats had hardly any sails up and were creeping around the lee side of the breakwater as they sailed back to port. Then they all dropped their sails before rounding the breakwater back into port.

Odd behaviour, I thought. Then it dawned on me that they knew something about the wind that I did not. As we were still in the wind shadow of Lion's Head, I had the crew drop the main sail and stow it securely.

Was that fortuitous! We saw the wind pick up to forty five knots as we neared the breakwater at Cape Town port. We were still sailing under a sliver of the genoa, having furled away most of the sail. And we were still going at over five knots. Hiding in the lee of the breakwater, we made our way towards the end where we would make our turn into port. The motor did a sterling job under these conditions as we furled away everything.

We made a very wide turn into port, leaving as much space as possible between us and the breakwater which was now a lee shore. The boat was barely creeping along, heeling to thirty degrees under bare poles.

And we got wet. Very wet. Never in my wildest dreams I would have thought that I would get so wet inside a port and without jumping overboard. Spray and foam everywhere. We got properly wet.

I have heard some stories of this nature before. Boats not being able to motor into this heavy wind. Now I have the first hand experience. 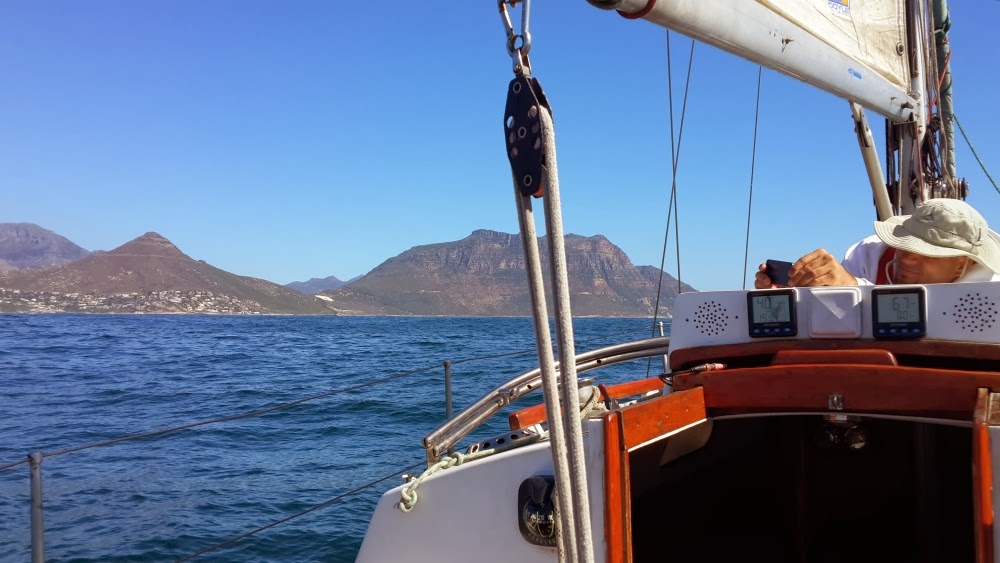 You can harness Nature, but you cannot control Her.

As for the crew, I was very happy to sign them out as “competent” after running this gauntlet.