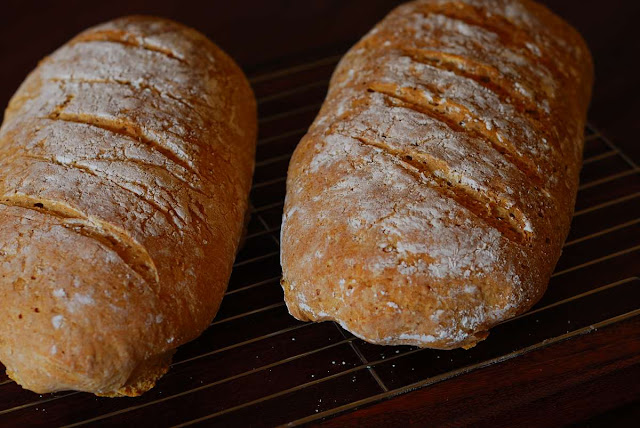 Perhaps I should have called this post 'Making Headway Against The Vagaries of A wild Sourdough.' But this is not a lamentation.

I actually have two experienced bakers to consult. Not too shabby. So between the two sets of advice and my trusted copy of Classic Sourdoughs, Revised by Ed Wood and the late Jane Wood, I set out on my next affray into the wonderful world of baking with sourdough.

I have the oven temperature and the spritzing with water under proper control. Ditto for the dough mix. And I am getting a wonderful fermentation of the starter as well as the main rise. I mix about a cupful of the mother with another cupful of flour for the starter, adding just enough water to make the starter somewhat runny. I go with personal judgement on quantities; this is worth about two cups of dough in the final mix, so I am not too worried about exact quantities.

This lot is left out on the kitchen counter for six hours or so. I judge readiness for the main mix by the size and quantity of fermentation bubbles in the starter. The starter should look quite spongy with bubbles bigger than 6mm (1/4”) The main mix is a different story, though. 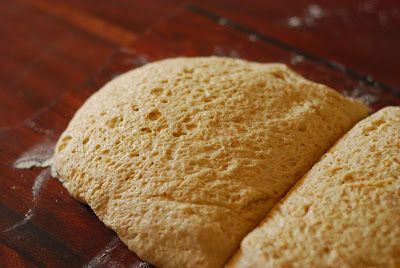 The main mix consists of the starter plus two cups of white bread flour and two cups of stone ground, whole wheat brown bread flour. Long words, but the mix here is more critical to the end result. I add just enough water to make a soft dough. This dough is folded, not kneaded. I keep at it for at least ten minutes. The dough becomes sticky, then elastic. I keep on folding for another five to ten minutes.

This time the main mix included two dessert spoons of olive oil in addition to two teaspoons of salt. After all, ciabatta being Italian, there has to be olive oil for the fatty  or oily part of the ingredients. This to make the bread more elastic, was the advice. The main rise was overnight in the oven. My oven being the most controlled place in terms of temperature, even though it is switched off.

In this case, I tried a new approach. The ambient temperature in the house is around 18ºC (64ºF). I understand that one wants to have a warm atmosphere for the first part of the fermentation, then something colder for the last part. Well, not having a large refrigerator, I made a rudimentary plan.

I patted the ball of dough with olive oil against drying out, then put the dough in the mixing bowl with the lid on. This lot went into the cold oven. I then switched on the oven to get the temperature up to 50ºC (122ºF). When the oven was up to temperature, I simply switched it off again. This gave me an elevated temperature for at least six hours, cooling down gradually overnight. This was a very successful experiment. The dough rose to almost triple the original volume in twelve hours. 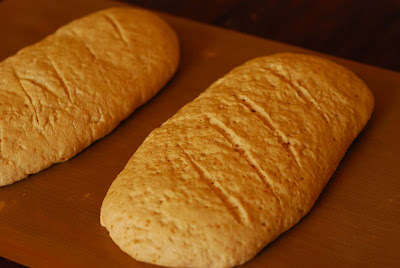 I turned the dough out on the kneading board and let it rest for a while before kneading it down prior to the second rise. This mix appeared to be a bit runny still, so I kneaded in another ¾ cup of flour. This got the dough into a consistency more to my preference for this stage. The second rise was for four hours, during which the dough again more than doubled in volume. I considered this as positive feedback from nature on my process! 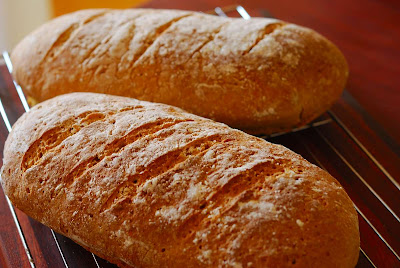 The dough was then formed into two flattish loaves. I divided the dough, then flattened each half and rolled then loosely into a flat loaf. The idea was to catch more air bubbles in the dough during the loose rolling. This worked well. The two loaves were rested for the time it took to get the oven up to temperature. This time I used a lower heat than before, around 180ºC (350ºF). The advice from my baker friends was that the loaves are thick and therefore need time to heat up and bake inside.

I heeded the advice and was pleasantly surprised with the result. This was also one of the few times ever that I started the loaves in a hot oven. Normally I would start from a cold oven, reasoning that there would be more time for oven spring as the oven got hotter. However, this last experience indicates that a hot oven from the start works better. I still have a small steel cup with boiling water in the oven to provide steam. This works well.

The loaves rose a little in the oven at the beginning. They came out very nicely browned, with a chewy crust and a reasonably airy crumb. The flour mix was just right and the flavour wonderful.


My next experiment would be to get these loaves lighter. I have some ideas. Come visit again, we are having fun! 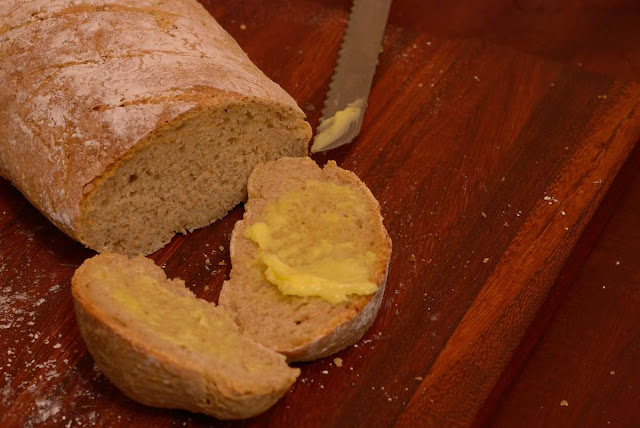