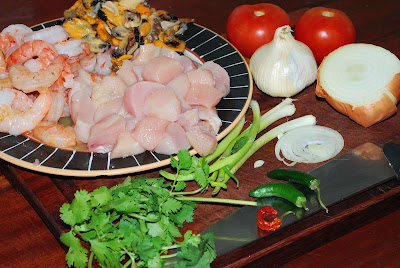 It's been a while since my last blog post. These things happen. In this case it was Christmas and the new year's festivities.
These have passed, now it was time for the missus and I to sit back, relax and have a cosy meal in quiet companionship. We needed this after the noisy new year's party.

The choice fell on paella. Something I haven't made for a while. So, a dive into the internet was not considered untoward. We have made paella before, this was a question of refining the recipe and to get new ideas, perhaps. The famous Jamie Oliver proposes using bacon, amongst other ingredients. Sounded frightfully British to me, so I searched for a Spanish version.

Being a member of a Google+ circle, I perused the blog of Maria Teresa Aleman, a Spanish food blogger resident in Madrid. Her recipe for paella mixta looked sufficiently traditional to give it a try. In fact, it looked positively delicious. Of course, true to form, I did not have the same ingredients. However, the general idea was good enough to set me on the way.

I have often thought about the difference between paella and risotto. After some deliberation and a brief internet search, I decided that the differences lie chiefly in the type of rice and the assembly of ingredients. And then I use my own process. The old ego and creativity thing, you know. Complete with my pet subject: Food made with love and passion.

For this one I used normal long grain rice, some de-boned chicken breasts, some shelled prawns and some shelled mussels. In my neck of the woods the mussels in half shells cost more than double the price of the shelled ones. Ditto for the prawns in the shell. This dish was not supposed to break the bank.

The ingredients given here are enough for about five to six decent portions. I used two fresh Thai chillies from the garden and a portion of a Habanero chilli. The Habanero gives a nice flavour to the dish. As for the chicken stock, I use a ready-mix one that comes in an envelope as a paste, then add water to the dish as required. I did not have a bell pepper (sweet green pepper), so I chopped one of the onions Chinese style to have shreds. Just for the looks of the dish. The tomatoes were just coarsely chopped into chunks, skin and all. This dish also requires saffron. I used the real Indian stuff as I do not have the Spanish variety. 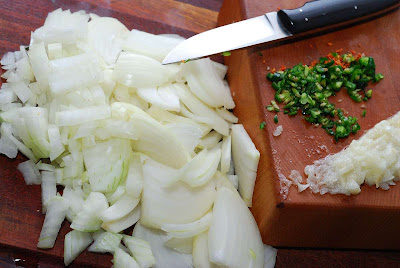 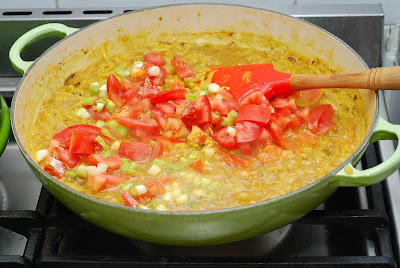 Some olive oil for frying

I decided to make this dish in a similar fashion as my stewed dishes and the risottos. The chicken gets fried in a dry pan with a little butter or duck fat to brown it, followed in separate turns by the prawns and then the mussels. The prawns and mussels get fried for about a minute or two, literally. Put the meats aside separately to let them rest.

Start again with some more butter or duck fat in the pan, along with a dollop of olive oil. I used my cast iron buffet casserole from Le Creuset, as the wide, shallow dish is quite suited to making a paella and other stir-fried dishes. Add the crushed seeds and stir fry them for thirty seconds or so until the flavour comes out. Add the chopped onions and fry them until they get brown, then add the chopped chillies and the mashed garlic.

Take care not to burn these, else you start all over because they go bitter. Once done, add the raw rice and stir fry to let the rice take up the flavours in the pan. Add a little water to ensure that the rice don't burn. Add the wine and the chicken stock and stir through thoroughly. Add boiling water as needed. The rice will start taking up water, so take care not to let the dish burn. Once the rice get to a three-quarters stage, add the tomatoes and the spring onions. Add some more water and let the dish simmer for a while. The crust left by the frying of the meat should be taken up by this time. Add the saffron and the turmeric at this stage and mix thoroughly.

When the rice is almost done, add back all the meats, the peas and the chopped coriander leaves. Check for sufficient water. There should only just be enough, otherwise the dish will be watery, which you don't want. Mix through, put the lid on and let the dish simmer for another five minutes. Then turn the heat off and let the dish rest for half an hour.

Now pour some wine and enjoy a sip or two while the dish rests. Then dig in! 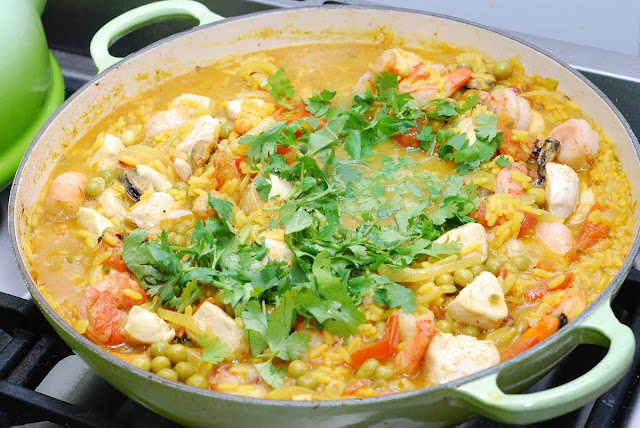