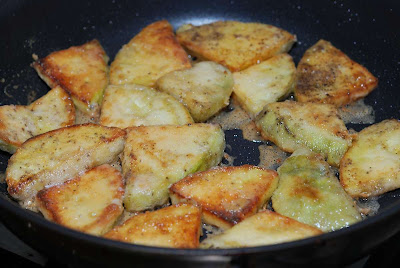 We hardly ever ate brinjals (eggfruit) when I was young. My mother simply does not believe they make worthwhile food. It is a pity, because they are quite tasty, useful as a vegetable and easy to cook, not a big mess.

I went on a traditional cooking spree recently. Perhaps due to the influence of the KykNet Kokkedoor cooking competition and the hype surrounding it. Had a deep study of recipes in some old cookbooks lying around the house, dating from the third quarter of the last century of the previous millenium. (This sounds a lot more romantic than saying the books date from around 1980.) Somewhere in this pile I found a traditional recipe for cooking brinjals.

This recipe is actually quite useful nowadays, as I was able to cook the brinjals with only a little oil, making it a nice and healthy vegetable side dish. Even for the not-so-young children of the house.

And this one is a no-brainer, good for letting the young ones help with cooking too: Peel the fruit with a potato peeler, then cut it into slices of about ten to fifteen millimetres thick (just over half an inch for my overseas readers). I cut these slices into quarters to allow more seasoning to come into contact with the fruit. Place in a shallow dish and immediately sprinkle liberally with salt and freshly ground pepper. Finely ground white pepper is also good, but watch the quantities. You need only a tinge of pepper to help bring out the flavour.

Leave this lot aside for a few minutes to allow the salt to draw some water out of the fruit while preparing the rest of the seasoning. The rest of the seasoning consists of a shallow dish with some cake flour. You roll the slices of brinjal in the flour before toasting them in a dry pan. I used my non-stick stainless steel frying pan from Le Creuset. If you don't have a non-stick pan, simply add a smear of butter or fat to your pan. You only need a small amount of oiliness in the pan to make thermal contact with the brinjals, much like pancakes.

The rest is simple: Roll the seasoned slices of brinjal in the flour, then toast them until the outside goes nice and brown. The outside will be crisp as well and some fluid will have cooked out of the fruit. Drain on a kitchen paper towel and serve hot.

Voila, you have toasted brinjals!