Baguettes: Are They Really So Difficult To Make? 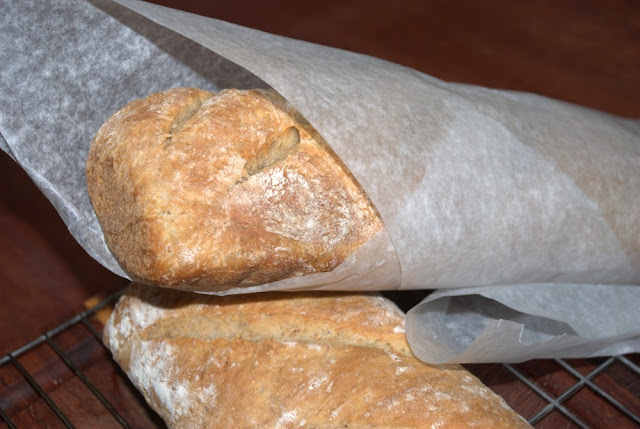 I was scared of making baguettes for a long time. For no apparent reason, just an eerie feeling of awe. Perhaps the whole reputation of the baguette got to me.

Until today. I decided that this is just another bread recipe and I am quite able to make bread. In fact, I have been researching and practicing the art for almost a year now. About time for the leap of faith, don't you think?

I already crossed the hurdle of having steam in the oven, so that would not be a problem. I also solved the problem of over-baking the loaves, which has to do with the fan in the oven and having a more even temperature gradient in the oven. I now use a temperature setting of 20-25 degrees C lower than what the recipe asks for. After the requisite baking time, I check the status of the loaves and may up the temperature or leave the loaves to bake a bit longer or both. The problem only arises when you already have too high a temperature and things happen faster than one anticipates. Perhaps there is another lesson there.

Be it as it may, I proceeded with my next experiment. This recipe is adapted from a recipe on the blog Take Back The Bread. I decided that I shall be treading the new path very carefully. The recipe asks for 4-5 cups of unbleached white flour. I used the same quantity but substituted 2 cups of stone ground, unbleached, whole wheat brown bread flour. The rest of the ingredients are very simple. Salt, two cups of water, instant yeast. That's it. Mix thoroughly, knead and leave to rise. Don't add more water but have a slightly soft dough. Use a dessert spoon or two of oil on the outside of the dough to prevent it from drying out.

Of course, in my world nothing happens with all the ease that the explanation would have. At first I used some leftover instant yeast stored in the original envelope, closed by folding over the open end and keeping it closed with a clothes-peg. This doesn't work for more than a day or two. My batch of dough did not rise and I had a problem. How do I get more yeast into the mix? After some deliberation I figured it out. Not too much of a problem.

Spread the dough by patting or rolling into a thinnish sheet, then sprinkle some yeast on the surface. Then fold the sheet several times and flatten again. Repeat the process till all the yeast is in the dough. Hopefully it is now spread reasonably evenly throughout the dough. You also are left with some decent folding and kneading which is not bad for the intended baguette.

This lot I left to rise for another hour, after which it had risen properly. The dough was kneaded down and split into two halves for the shaping part of the process.

The shaping part is also quite easy. Roll out the dough into a rectangle roughly three times as long as it is wide. In my case I used baguette pans, so one of the dimensions was determined already. Once the dough is rolled out, start at one of the short ends and roll it up into a sausage. Make sure that the sausage is tightly rolled, otherwise you may end up with a loosely rolled thin loaf. The sausage now gets put down with the end joint at the bottom. Tuck the short ends in by pulling the top part over the end and tucking it under the end. This will tidy up the loaf. Repeat with the other loaf. Now roll each loaf in some dry flour, just for a small dusting.

Cover with a wet tea cloth and allow to rise for another hour. The loaves should double in volume again. Take a sharp knife and make three shallow diagonal cuts on top of each loaf to allow for oven spring. Leave the loaves to rest for another ten minutes before popping them into a pre-heated oven at 220ºC/425ºF. My oven has a fan that stirs the air inside around, so I use a setting of 200ºC/390ºF, else the oven is too hot. I also put a cup of water at the bottom of the oven to supply some steam for the baking process.

Bake the loaves for 22 minutes or until they are nice and light brown on top. Remove them from the oven and leave to rest for another fifteen minutes. This will allow the crumb to develop and get rid of the last steam inside the loaves.

This time I had real success. The loaves came out with a thin chewy crust and a light crumb. Of course, these were brown, so it looked a bit different from the normal white flour baguette.  Small holes, probably too little water. A lesson for next time.

But the taste was exquisite.

I wonder where my fear went. Probably evaporated when the dough did not rise as expected. Live a little, learn a little. We used the opportunity to have this with some cheese and wine for a light romantic dinner. Wonderful food. 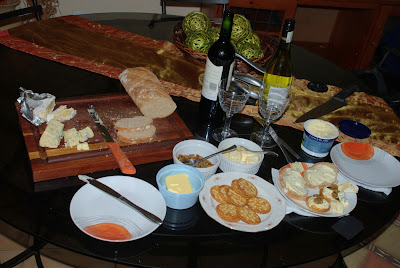