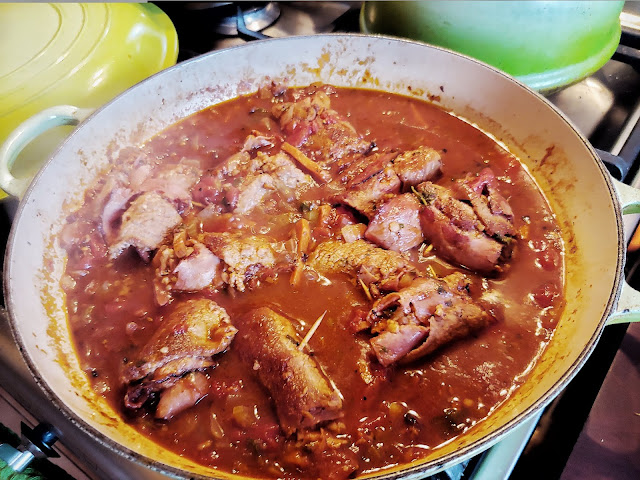 The holiday and festive season being upon us again, boredom sets in.  Rather quickly, once the office year-end parties and club end-of-year functions have taken their toll.  In South Africa, this is the time of rich dishes and too much food.  And afterwards everybody goes: “ugh, I had too much to eat.  Again.”  Perhaps then it is time for a not-so rich, but flavourful and wholesome dish that is easy to prepare, yet classier than mac and cheese.

Beef braciole is a classic Italian dish of this nature.  It requires some effort but is reasonably quick and easy to prepare.  The dish consists of an Italian version of what we here in South Africa know as beef olives, stewed in a wholesome tomato-based sauce.  The internet abounds with various versions of the sauce.  I chose a standard standby, this time adding a little red wine to deglaze the pan.  This may be substituted by a little apple cider vinegar. 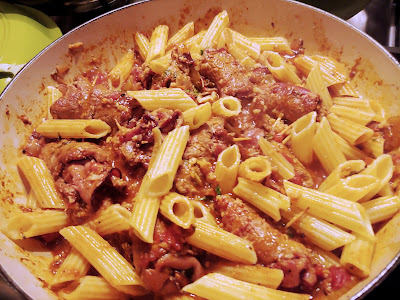 The dish is usually made using a whole flank or a round cut.   You may opt for a large roll or several small ones.  I went for the small rolls, rather like the beef olives.  The beef may be substituted by mutton or pork of a suitable cut.  The rolls always have a savoury filling.  I chose prosciutto and breadcrumbs inundated with garlic, some grated hard cheese like parmesan and some finely chopped parsley.  I also added a drop of olive oil, as the filling looked a bit dry.  The breadcrumbs will soak up the sauce, so be sure to make a sauce that will penetrate.  The prosciutto may be substituted for any smoked flavour meat.

As for the cut of meat, I opted for beef topside, which I sliced across the grain.  This gave me several narrow pieces, in addition to some small offcuts.  The slices of beef are then rolled out using a rolling pin to get thin slices, rather like carpaccio.

The sauce is made from peeled tomatoes.  I made my own variation by frying some onions, grated carrots and chopped celery, before adding the tomatoes.  I also added a dollop of cayenne pepper/dried chilli powder and a bay leaf.  For the main flavour I pounded two small sprigs’ worth of oregano leaves from the garden in a mortar and pestle and added this to the sauce.  Oregano is a hard herb, normally used in larger quantities.  This time I decided on a little experiment, which worked beautifully.  The oregano flavour came through, but not overpoweringly. 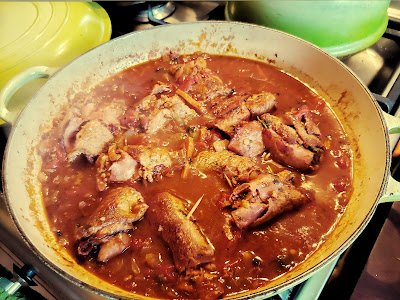 Slice the meat in thin slices across the grain.  This is always a good idea.  Use a rolling pin to roll the slices even thinner.  Arrange the slices flat on the work area and top each with a slice of the prosciutto.  Top this again with a layer of breadcrumbs, chopped parsley and the mashed garlic.  Then roll up the olives into small rolls and stick a toothpick through to keep each one together for frying.   Heat up a frying pan and fry the olives in light olive oil.  The meat needs to caramelise and there should be some caramelisation in the pan.  The offcuts from the cut of meat may be chopped finely and fried with the last batch of olives.  Remove the olives from the pan and fry the onions, carrots, and celery, but leave the small meat grits, they add to the stock.  When the onions are translucent, add the wine to deglaze the pan.  Then add the tomatoes.  Mash them with a potato masher.  Add the mashed oregano and the bay leaves.   Salt to taste.  This is where you add the cayenne pepper or dried chilli.   Bring to the boil and allow the sauce to reduce a little.   When the sauce thickens a little, add the olives back, turn the heat down and simmer for at least forty minutes. 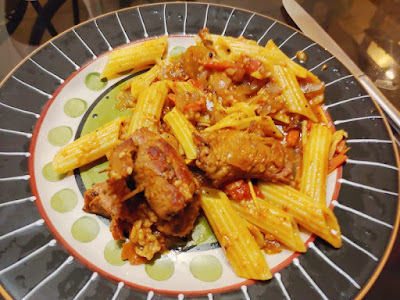 This dish is served with pasta of your choice.  As it is a chunky dish, I opted for penne.  These I cooked separately, then strained and added it to the main dish as a mix.  Garnish with some more grated cheese and serve hot.  A hearty and delicious family meal.  It goes well with a medium bodied red wine.