Bread And Butter Pudding? Not Again! 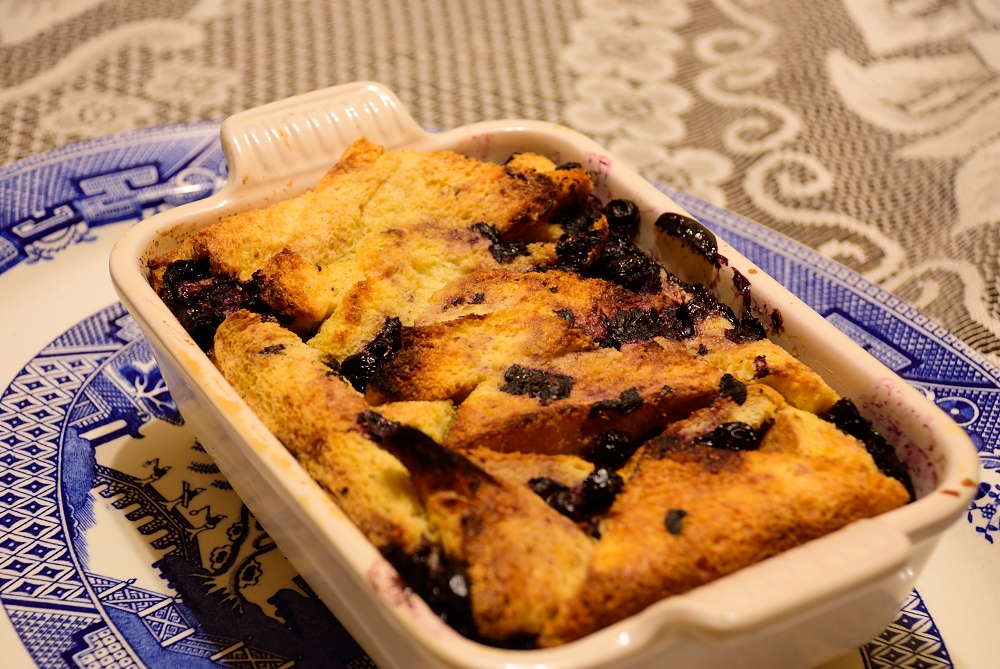 Yes, again. One of the simplest puddings in the world. Not Banting style, for sure. But this is a dessert after all.

The idea for this dessert came up recently with small cold fronts reminding us that the summer is over and that it is time for some hearty winter fare again.

This one started, as usual, with an internet search. I was certainly not going the traditional way of using slices of bread, buttered and some apricot jam spread over, all squashed in a suitable dish, egg batter added and baked.

The internet search revealed a myriad of recipes. After surfing this mass of information for about five minutes I was salivating all over the keyboard! Never did I think that this humble dessert would attract so much attention. The ingredients vary from simple to intricate and exotic. Fillings vary from jam through dried fruit and frozen fruit to fresh fruit and nuts. There are some versions that resemble more of a main dish than a dessert, using some meaty filling.

Mine was going to be a dessert, simply made, but with some deviation from the very staid traditions.

Some versions use baking powder to get some fluffiness into the dish. I opted for going the traditional way to keep it simple and away from all kinds of chemicals. The bread itself is sufficiently refined. Speaking of the bread, most recipes call for stale bread. One blogger stated firmly that there is no such thing as stale bread, just another opportunity to creatively use bread with character. I agree with him. And did you know that you cannot make a decent hamburger using fresh bread? The crumb is simply too soft. You have to let the bread mature for at least a day before it will be firm enough to make a hamburger.

So here I am in this creative mood, salivating already just from the thought of a deliciously warm and hearty dessert.

My design instincts told me that the pudding needs to be as light as possible. I was slightly snookered here, as I did not have three day old bread and had to buy a fresh loaf. I scoured the fruit shelves of my local vendors, but no obvious fruit came into view. In the end I opted for some blueberries. These may be found year round on supermarket shelves nowadays. I also had dried fruit in the form of fruit cake mix. My packet of cake mix is quite old and the fruit had crystallized. This would be useful as well. And then I topped the list of ingredients off with real vanilla from pods I bought in Madagascar while on my last ocean voyage.


The saucy part of the dish needs sufficient egg to bind the lot. Some recipes use about one egg for every two slices of bread. This seems a bit over the top and I settled for three eggs for the eight slices of bread I used. For the milk I used a mix of fresh cream and milk, mixing this into the stirred eggs and adding in the vanilla seeds from one pod.

The blueberries were mashed in a mortar and pestle. I use one from le Creuset as it has the right size for my needs. Save some of the blueberries for garnish.


This recipe is sufficient for about six servings. I used a small stoneware dish, also from le Creuset, for the baking. The dish comfortably holds eight slices of bread.  Bear in mind that the dish does rise a bit during baking, so use your common sense in the choice of dish for the baking.

Spread the butter liberally on each slice of bread. Arrange the slices in the dish, butter side down. Add a dash or two of blueberry mush on each layer  of bread, along with some of the dried fruit. The last layer of bread may be arranged in some artistic way to enhance the appearance of your dessert before serving.

Mix 100 ml of the fresh cream with the milk. Add in the seed from one vanilla pod or use a teaspoon of vanilla essence. Pour this lot over the bread. Do it slowly to allow the bread to soak up the fluid.


Now pop this into the oven at 175°C/350°F for twenty minutes. Then turn the oven up to 200°C/400°F for another ten minutes. This will bake the top of the dessert to a nice brown caramel state. I then switched off the oven, leaving the dish inside to sweat a little before I removed it to cool down. Remember. The dish may very well be soggy after the baking. You need to allow the boiling juices inside to finish boiling and for the steam to evaporate. The dish will then solidify and the consistency would be that of a juicy cake.

Serve this up with a dash of the remaining cream and enjoy. This one came out much better that I expected, with the blueberry juices nicely dispersed by the cooking. 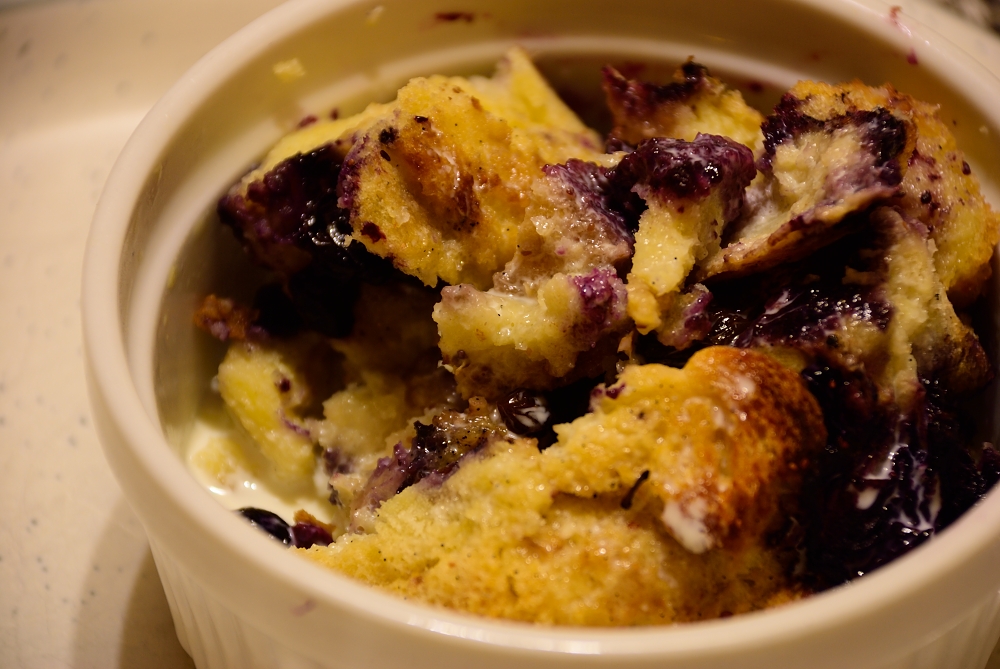 And remember, above all, use real butter.