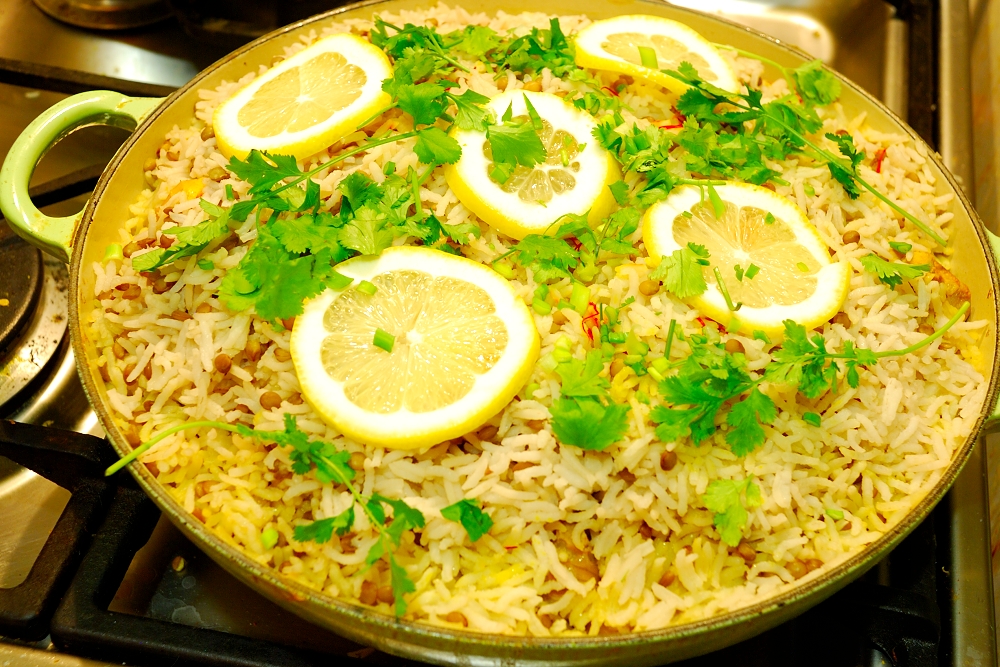 Biriyani must be the most the most underrated dish in the culinary world. Here in South Africa you even get it in cans, if you look in the right place. Very common over the whole of Asia, it appears.

It is very easy to make. Perhaps that is where the idea comes from that it is a commonplace dish and therefore treated with disdain.

However, there is much variation to this dish. You can make it in a multitude of flavours, ranging from mild to strong. You can actually make the meaty part very strongly spiced as the rice part will dilute the strength somewhat.

But the appeal of this dish lies in the gentle flavours it carries. If you intend to use saffron, it is sacrilege to make it too spicy. The spiciness will overpower the exotic flavour of the saffron and it will turn out to be just another spicy rice dish.

Biriyani is made in two parts, then assembled and steamed. Cook the rice and cook the meaty part. And the exotic flavour lies in the preparation of the meaty part. Especially the process.

The meat is marinated in a spiced yoghurt marinade. Fresh herbs make a huge difference to the end result. I used fresh coriander leaves. The rest of the herbs and spices are the normal ground spices available through your local supermarket or spice shop. Whatever you do, try your utmost to get hold of fresh herbs and spices. It really makes a difference.

For this version I decided to broadly go along with the basic recipe from my food blogger friend Maria Nasir. She lives in Lahore, Pakistan and makes the most heavenly food in her kitchen. Pakistani food is quite spiced, but not strong. They focus on flavours over there. You can find Maria's recipes at her Foodaholic web site. Well worth the visit.

Perhaps also because I am a bit of a pirate at heart. There is a saying in sailing circles that you should always  be yourself, except when you can be a pirate. Then always be a pirate. Very tongue in cheek, but quite uplifting. So I decided to do the pirate thing.

I used Maria's recipe as input to my dish. You  need to marinate the chicken, no arguments about that. Use lemon juice to cut the heat if too spicy. I used lemon as garnish only, This dish does not normally come out spicy.

You will need quite a large casserole with a lid to make this dish. As it is a rice dish, the rice needs to be fluffy and loose. You steam it slowly to obtain the final flavours.

Chop some of the coriander leaves and mix with the yogurt. Add the turmeric, some salt, masala powder and cumin. Mix thoroughly. Add the chicken and marinade for at least half an hour. I removed the skin from the breast and thighs. Cut the chicken into manageable pieces. I find that the marinade does nor penetrate the skin, so I remove chicken skin as far as is sensible. Cut the breast pieces into double thumb sized chunks. This dish is chunky.

After the meat has been properly marinated, start the cooking. As usual, we start by frying the onions in the butter until at least translucent, but preferably caramelized. Add the garlic at the end, frying it for about fifteen to twenty seconds. Then add the meat. You don't need all the marinade, so chuck it. It will clutter your final dish and make it soggy.

In the mean time, cook the rice and lentils on the side.

Fry the meat until it is well cooked, then add the chopped tomatoes.  Add the cinnamon sticks and aniseed at this stage. Turn the heat down to minimum and simmer for at least twenty minutes. The juices need to cook away a bit and the resulting masala needs to be on the dry side. Watch out for burning, you don't want that, it will make the dish bitter and you start over.


Remove the meat and masala from the pot and keep warm on the side. You will now start to build the final biriyani.

Put  a layer of rice in the bottom of the pot, then add some of the meat and masala. Cover this with another layer of rice and add the rest of the meat part. Don't add the mushy gravy part, your biriyani will come out soggy. Cover the last meat layer with the last of the rice and lentils. Garnish this with some lemon slices and some coriander leaves. Add the saffron tea to the dish now, cover and simmer at the lowest heat for at least twenty minutes. Then switch off the heat and let the dish rest for another twenty minutes to develop flavour.


Mix everything up before dishing up. Add salt as required. This dish has a very subtle set of flavours, so perhaps it is not a good idea to pair this with a heavy red wine. In Pakistan this is served with a raita, a sauce made of yogurt and spices.